Analog Devices is an Mbed Partner and develops code on the platform for multiple products. The AD9106 and AD9102 Mbed-enabled evaluation boards and example Mbed codes can be used as starting point for characterizing the high-speed waveform generator digital-to-analog converters before integrating them into specific applications.

This guide will focus on how AD9106-ARDZ-EBZ/AD9102-ARDZ-EBZ works with SDP-K1 controller board developed by Analog Devices. Users are not limited to using SDP-K1 for evaluation or prototyping. The evaluation boards and the example source codes with minor changes can work with other ARM-based Mbed-enabled boards. The user interface is text based.

The evaluation setup can be powered by USB only and does not require a high-frequency waveform generator for clock input. The evaluation board has an on-board 156.25 MHz crystal oscillator. To fit the evaluation system in a small form factor and manage power consumption within USB specifications, AD9106 and AD9102 supply voltages AVDD, DVDD and CLKVDD are limited to 3.3V only. 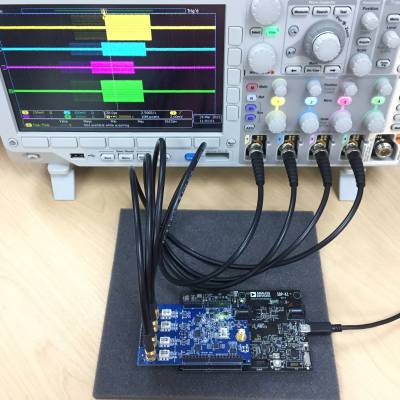 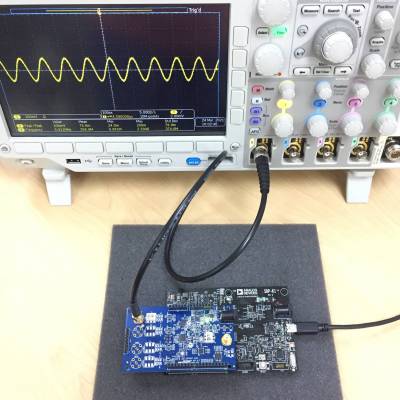 Tip: Click on any picture in this guide to open an enlarged version.

Reconfiguring the Evaluation Board 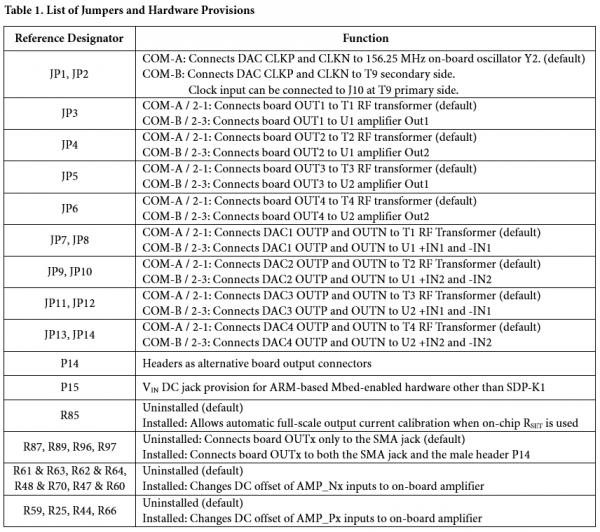 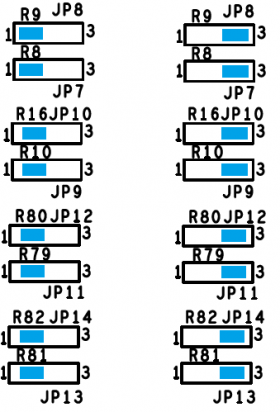 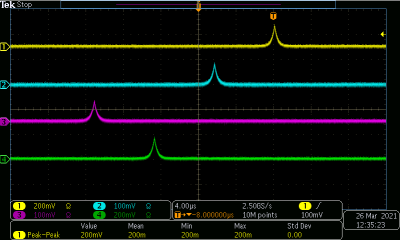 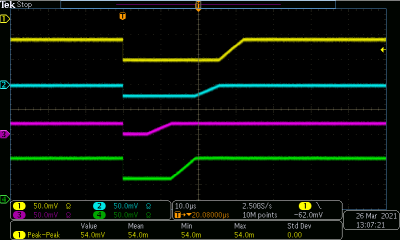 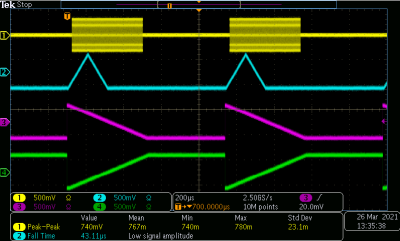 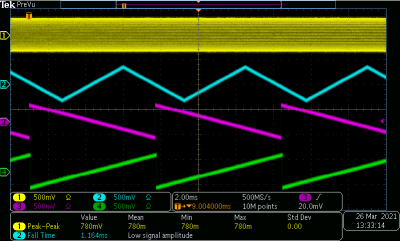 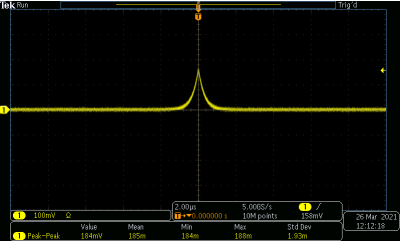 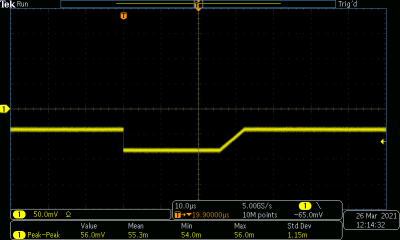 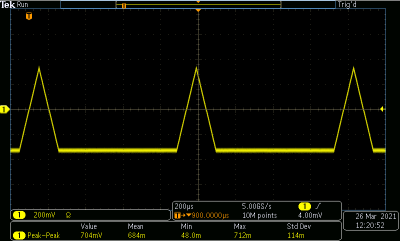 To properly observe the other patterns out of the amplifiers, replace C25, C26, C54, and C55 with 0Ω resistors or remove the capacitors then solder each pair of pads together. Waveforms are shown in Figures 17a to 18c.

The common-mode voltage of the amplifier outputs can also be changed by installing resistors for DC offset correction of amplifier inputs. Refer to Table 1. Keep C25, C26, C54, and C55 pads shorted.

When tapping to the evaluation board outputs, users are not limited to the SMA jacks. P14 headers are provided as alternative connectors but performance is not as good as when using SMA connectors.

The EVAL-AD910x Example Mbed Codes can be used as starting point for developing firmware for targeted applications. The codes in the repositories below demonstrates how to setup SPI communication between the ARM-based Mbed-enabled hardware, SDP-K1, and the waveform generator DACs, AD9106 or AD9102.

To import the program files to the Mbed compiler as discussed in the Quick Start Guide, the user should have a free Mbed account and is logged on to https://os.mbed.com/. After successful program import, the user is free to use and modify the codes without violating the Analog Devices Inc. Software License Agreement in the License.txt file.

Each file and each of the functions in the files have short descriptions or briefs. This section will focus on how several files and functions can be modified using the Mbed online compiler. 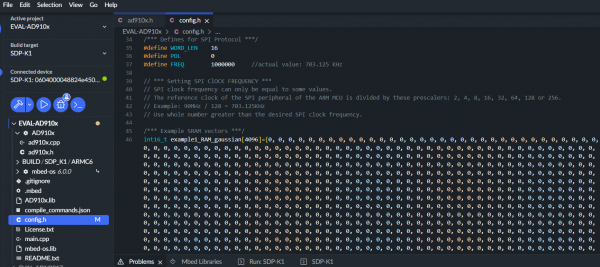 
Setting up the SPI Interface

Aside from choosing the active device as shown in the Quick Start Guide, SPI protocol parameters particularly the clock frequency can be set at the application-level codes. Word length WORD_LEN and polarity POL need not be changed and are already set specifically for AD9106 and AD9102. Refer to Mbed OS 6 SPI Documentation for more information on these parameters.

Instructions on setting the SPI clock (SCLK) frequency are already provided in config.h as shown in Figure 19. The reason why SCLK can only be set to a number of fixed frequencies is discussed in this Mbed wiki page on SPI output clock frequency. SPI lines out of the Arduino headers or SPI1 module of the SDP-K1 ARM processor, uses 90MHz peripheral clock. Refer to these relevant source codes: 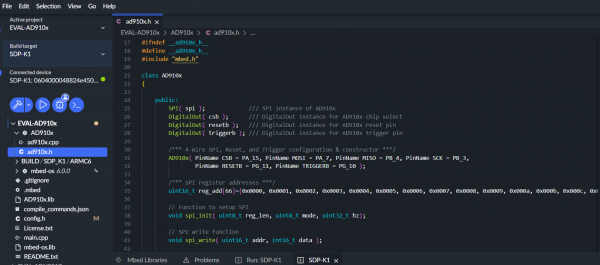 Initialization of digital I/O pins connected to the DAC being evaluated, and declaration of SPI register addresses and device-specific functions are in ad910x.h. See Figure 20. The functions are implemented in ad910x.cpp. The Mbed platform drivers allow setup of 4-wire SPI interface. Refer to Mbed documentation for other configurations.

Figure 21a. Waveforms that can be generated using DPG Lite

Although the SRAM vectors can be modified manually, it will be more convenient to create new vectors using DPG Lite. Shown in Figure 21a are types of waveforms that can be generated using the software.

When creating data vectors for AD9106 and AD9102, make sure to choose the proper DAC resolution and leave the Unsigned Data box unchecked. A continuous wave vector with record length of 4096 can be created but the SRAM can also be composed of different types of waveforms like in the example in Figure 21b where there are 3 vectors with combined record length of 4096. These can be saved as text files and integrated into the source code.

It is not required to write to all 4096 addresses. Each DAC channel in a device can fetch data from a fixed SRAM address to another. The start and stop addresses can be set using the following registers: 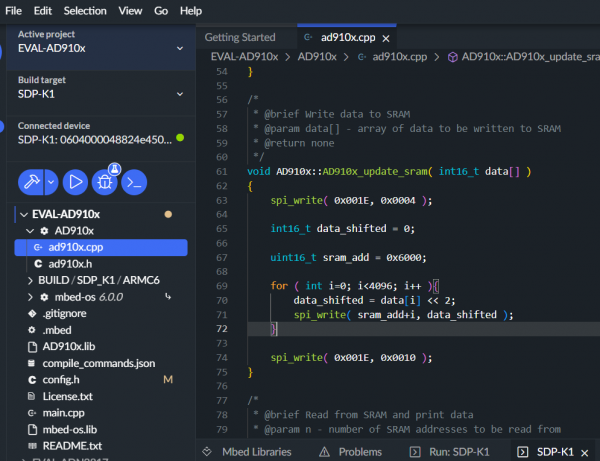 Figure 22. Function that writes to on-chip SRAM in ad910x.cpp

AD910x_print_sram() function is declared in ad910x.h and implemented in ad910x.cpp but is by default not called in the main program main.cpp. The function can be used to print in the console n number of data words from SRAM. This can be done by calling the function in main.cpp after an AD910x_update_sram().

AD9106 and AD9102 have similar register maps. The latter only has less number of registers that affect device functionality because writing to registers for the 3 other DAC channels will only have an effect to AD9106. Nonetheless, the defined SPI registers address in ad910x.h will work for both devices. 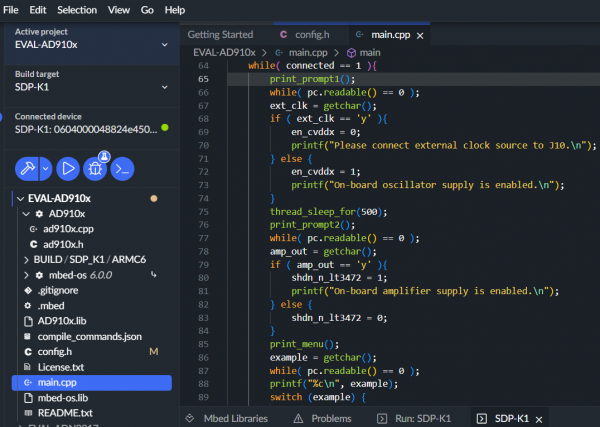 This section lists items to check and practices to use when debugging any unexpected performance of a board. If unexpected results occur