Much of this exercise mirrors the Buck Converters: closed loop operation lab. The objective of this activity is to close the loop around the boost converter developed in the open-loop exercise such that the output voltage remains constant as the input voltage and output loading conditions vary. First, the loop will be closed in an “overcompensated” manner, such that the DC output voltage is correct, disregarding stability, transient response, and other AC parameters. The power stage AC response will then be characterized, essential in developing a robust and stable control loop. The loop will then be closed using the “obvious” method of voltage-mode control, that is, adjusting the duty cycle directly in response to an error in output voltage. Next, a current control loop will be introduced, and the advantages and disadvantages of this method explored.

The various LTspice analysis techniques are described in Buck Converters: closed loop operation, details are omitted in this activity.

A buck converter, while not necessarily a simple circuit, can be thought of of as an L-C-R filter, where a switching waveform is applied to the input of the filter, and the output is an averaged representation of the switching waveform. Boost converters, on the other hand, are a bit more mysterious - a low voltage is used to “charge” an inductor, storing energy in a magnetic field. This stored energy is then released into a load that is at a higher voltage than that used to charge the inductor… like magic.

This is called “voltage mode” control because the error signal (how far we are off from the desired output voltage) directly controls the input voltage to output voltage ratio (set by the duty cycle.)

Figure 1 below shows the boost power stage from the open-loop exercise, but with the duty cycle potentiometer replaced by an op-amp circuit configured as an inverting integrator. This circuit compares a scaled version of the output voltage against an accurate 1.25V reference voltage, and performes the following actions, stated qualitiatively: 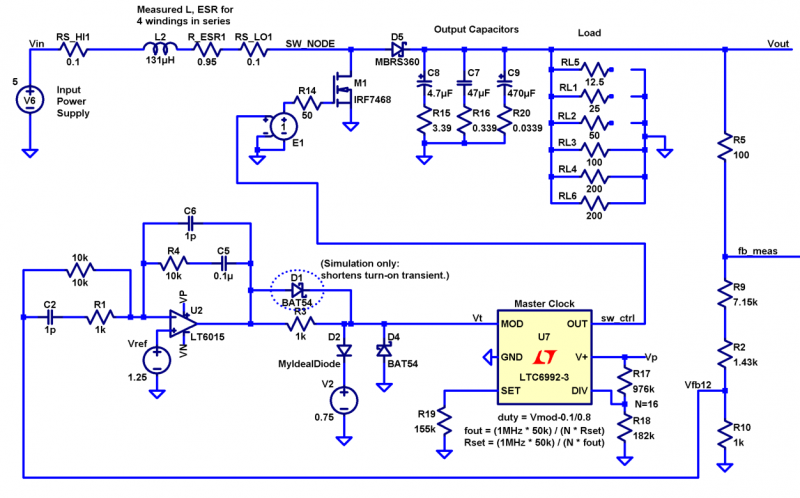 Open the CL_boost_voltage_mode.asc simulaton, verify that the lower two 200Ω load resistors are connected (100Ω total load), and run it. Observe the turn-on transient, which has quite a bit of overshoot, but then stabilizes at 12.0V. Zoom in on the switch node and inductor current after the intial transient, shown in Figure 2. Note that the circuit is operating in DCM. 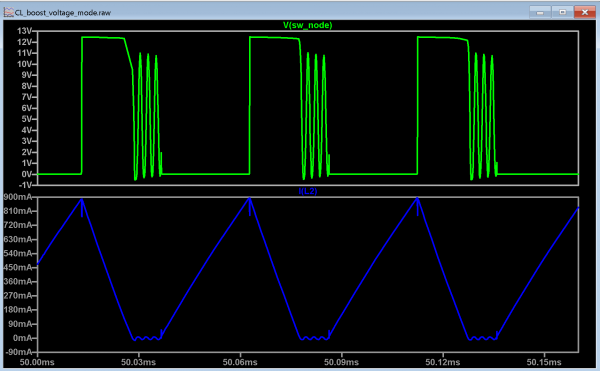 BEFORE APPLYING POWER… Configure the ADALM-SR1 board as shown in Figure 3 below:

Connect a 5V, 1A USB power supply to the Auxiliary Power micro USB jack. At this point, the frequency can be fine-tuned by looking at the D0 signal in Scopy's logic analyzer. Set the frequency to 20kHz (50μs period)

Ramp the Power Input to 5V and observe the current sense and switch node waveforms. Note that Scopy's vertical scale can be entered arbitrarily - enter a value of 280mV/Div, which corresponds to 400mA/Div. Figure 4 shows the measured results; compare with the simulated result in Figure 3. 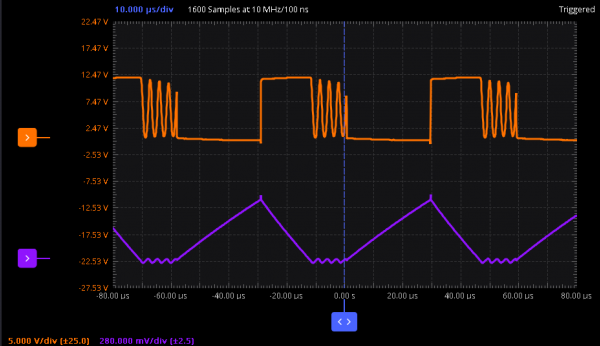 Decrease the load to 200Ω by removing one of the 200Ω jumpers and note that the duty cycle decreases automatically to maintain 12V at the output as shown in Figure 5. 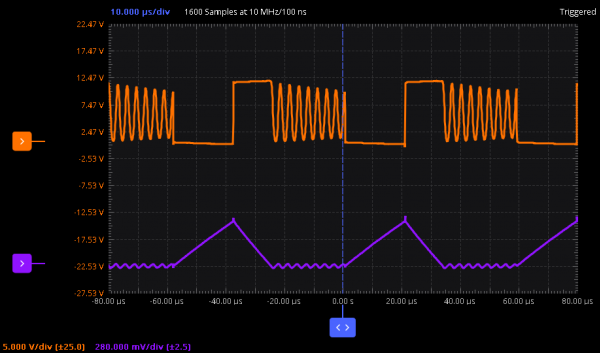 Adjusting the LTspice simulation accordingly shows close correlation to the measured results as shown in Figure 6. 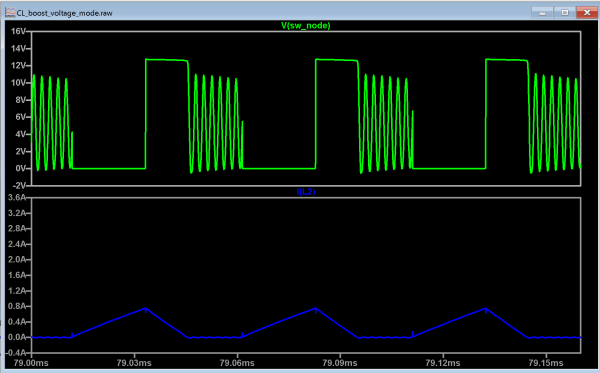 This is called “current mode” control because of the error signal (how far we are off from the desired output voltage) is directly compared to the peak inductor controlling the current in the circuit. Conceptually this makes the inductor a controlled current source.

The previous examples were overcompensated so that the steady-state operation of the control loop could be analyzed, without too much concern that it would burst into oscillation. The next few experiments will demonstrate the drawback of overcompensation (slow response to changes in conditions), and outline the procedure for making it a bit more “snappy”, while still not oscillating.

The first step in speeding up the response by adjusting the compensator is to understand the response of the power stage to the output of the compensator. Or stated another way, to find the transfer function from a wiggle at the power stage's control input to the output actually moving. A great reference for some of these ideas is Linear Technology (Analog Devices) Application Note 47, Appendix C “The Oscillation Problem - Frequency Compensation Without Tears” (insert URL)

Dig into differences between boost and buck stages in terms of dynamic response, output impedance, etc.

Let's take our newfound knowledge of the power stage, and analyze the closed-loop response with the overcompensated compensator.

(speed up compensator to some reasonable fraction of power stage, predict result, compare against ADALM-SR1)

Intro on differences in control dynamics…