The ADALM-SR1 (Analog Devices Active Learning Module, Switching Regulator #1) board is a “dis-integrated” DC-DC switcher. With today's modern controllers, due to integration, everything is inside a single package which can make it difficult to understand some of the fundamental concepts. Dis-integrating (building the controller from fundamental building blocks) enables the ability to investigate and manipulate signals that otherwise would be hidden from the user. With the ADALM-SR1, the user can configure it in multiple ways, and better understand switching concepts.

Here is a short introduction video:

We have started several switching regulator exercises covering buck and boost regulators that can be used with the ADALM-SR1 board.

The circuits required for these exercises exceed the complexity that can be constructed on a breadboard, so the ADALM-SR1 is required to run them, although the simulations can be run beforehand to gain insight into the circuits' operation.

The Figures 1a and 1b show an overview of the board, along with connections to an ADALM2000 (m2k) and meters.

A Wurth 749196141 6-winding coupled inductor is used in both boost and buck configurations. The datasheet inductance for a single winding is 8.5μH, with a DC resistance of 344 milliohms. The windings are connected in series on the ADALM-SR1, allowing the inductance to be changed as noted in the table below. (Values in the table are measured from a typical board.)

A 4.7μF capacitor is always connected to the output of the circuit. An additional 47μF and 470μF can be added by installing jumpers according to the table below.

A resistive load may be connected to the output of the circuit. Resistances range from 12.5Ω to 200Ω, and may be added in parallel according to the table below. The jumpers are 3-position, with the righ-hand position connecting the resistor to ground, and the left-hand position allowing the effective resistance to be adjusted by Pulse-width-modulating the ground connection.


The R87 (LOAD CONTROL) potentiometer controls the duty cycle of all load resistors whose jumper is placed in the adjustable position, by swithcing the ground connection. (YES this is super weird, but it's convenient and it works much better than you'd think!) Duty cycle is guaranteed to be zero when fully counter-clockwise and 100% when fully clockwise. Thus the load can be a combination of fixed and variable resistances, and the exact duty cycle of the onboard PWM circuit can be measured at P40. The signal at P40 has a 1k impedance and maybe overdriven by a 3.3V logic signal, allowing the load to be stepped.
The load PWM frequency is fixed at 200kHz, approximately 10x the typical operating frequency of most experiments, thus appearing as a steady (DC) load.
A 0.1 ohm current sense resistor is in the ground return of the load resistors, allowing the total load current to be easily measured with meter set to the 200mV range at either the LOAD turret post (TP25) or the LOAD CURRENT jumper (P39).

The selection between boost or buck topologies is made by jumpers P25, P35, and P37.

Close inspection of the operation of the circuit will show that in theory, either current sense amplifier will work for both topologies, but the amplifier that is NOT at the switch node is chose in order to minimize errors due to common-mode excursion.

The ADALM-SR1 has several operational modes, set by the jumpers noted below.


The peak current circuit is always active, even in duty-cycle mode; increasing robustness in the event of an output short circuit.

An LTC6992 Pulse-Width Modulator allows the switching MOSFET's duty cycle to be controlled directly, either manually by adjusting the DUTY CYCLE knob, or under the control of the error amplifier.

In peak-current control modes, the peak current can be controlled either manually by adjusting the CURRENT THRESHOLD knob, or under the control of the error amplifier. The current threshold is also always active in voltage control modes, maintaining per-cycle current limit as an added safety and robustness feature.

The setup and operation of circuitry associated with the lab exercises is described in detail in the exercises themselves. The ADALM-SR1 includes various auxiliary housekeeping and protection circuits described here.

The ADALM-SR1 has two power inputs. The experiment power input is supplied by the user, and the voltage will vary depending on the experiment being run. An additional micro USB connector is the input for a 5V “housekeeping” supply that powers all of the control circuitry, allowing the experiment power to vary over a wide range. An LT3472 boosts / inverts the 5V supply to +15 / -2V, respectively. This provides a high voltage and slightly negative voltage for the LT1995 current sense amplifiers, and a negative supply for the error amplifier.
An LT1970-1.25 provides an accurate reference for the error amplifier and duty cycle, current threshold adjustment potentiometers.

The Figure below shows an LTspice schematic of the ADALM-SR1's protection circuitry. The simulation file is available at OL_engineer_proofing.asc and running the simulation in LTspice will exercise some of the various fault conditions. 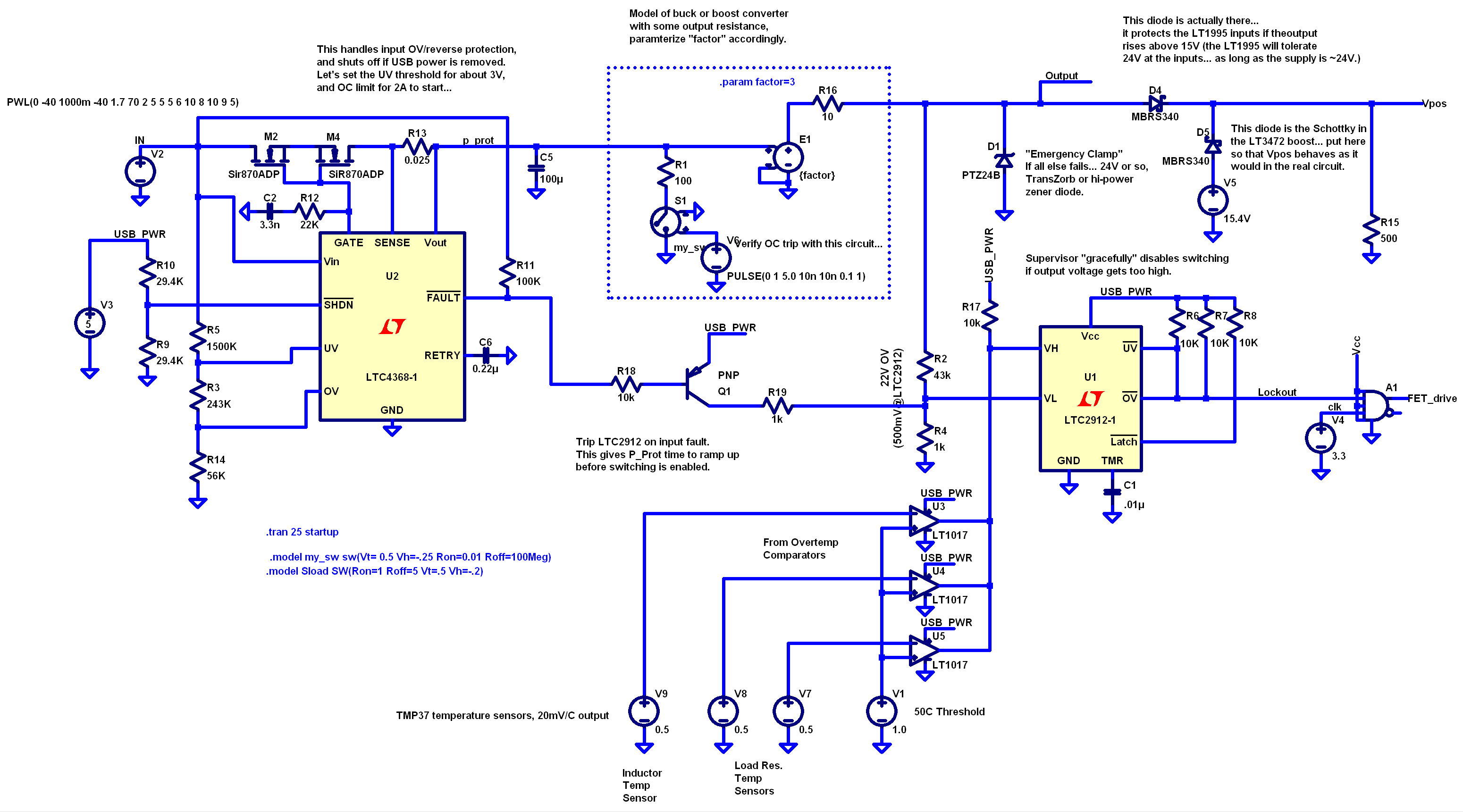 An LTC4368 and associated circuitry protects the experiment power input by only turning on when the supply is between 3V and 15V. The circuit is protected from voltages between -40V and +60V. The LTC4368 also functions as a fuse, shutting off the supply if the current exceeds 2A.

In boost mode, the ADSRALM can produce high voltages under certain conditions: if the duty cycle is high and the load is light, or if feedback is disconnected. An LTC2912 overvoltage / undervoltage supervisor will disable the switching circuitry if the output exceeds 22V. An SMAJ24A, 24-volt TVS diode provides additional protection.

The inductor and onboard load resistors can get warm during certain experiments or if the board is misconfigured. Three temperature sensors measure the inductor temperature and the temperature of the high-dissipation areas of the load resistor bank. If any temperature exceeds 60ºC, switching is disabled for a 1.9 second cool-down period.
The low-resistance loads consist of parallel, single 100Ω, 1/2W resistors - An orange LED near the associated jumpers illuminates when the output voltage exceeds 7V as a warning that these must be disconnected.
The high resistance loads consist of multiples of two 100-ohm, 1/4W resistors in series, which will handle voltages up to 14V. A temperature sensor is still included in case the output voltage exceeds 14V or if the experiment is left running for an extended period of time.

This is an informal internal test report, intended to exercise operating conditions outside those detailed in the experiments. This may be useful for those developing additional exercises.

This page is for the released revision of the ADALM-SR1. Documentation for the pilot run (rev A) is here for reference: ADALM-SR1 hardware