The EVAL-ADXRS290-PMDZ is a simple Pmod form-factor evaluation board for the ADXRS290, a high-performance MEMS pitch-and-roll (dual-axis in-plane) angular rate sensor (gyroscope) designed for use in stabilization applications. 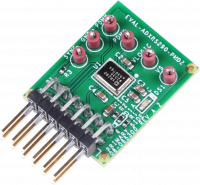 The solution senses and digitizes the X-axis and Y-axis (also called roll and pitch) angular rates, producing a positive reading for clockwise rotation about the x-axis and y-axis.

The ADXRS290 provides an output full-scale range of ±100°/s with a sensitivity of 200 LSB/°/s. Its resonating disk sensor structure enables angular rate measurement about the axes normal to the sides of the package around an in-plane axis. Angular rate data is formatted as a 16-bit two's complement and is accessible through an SPI digital interface. The ADXRS290 exhibits a low noise floor of 0.004°/s/√Hz and features programmable high-pass and lowpass filters.

The ADXRS290 communicates via 4-wire SPI and operates as a peripheral (slave) device, with a maximum clock frequency of 12MHz.

The Digital communication on the EVAL-ADXRS290-PMDZ is accomplished using a standard expanded SPI PMOD port.

Similarly, utility software (iio_info, IIO Oscilloscope, PyADI-IIO, etc.) can be used for both the EVAL-ADXRS290-PMDZ on Raspberry PI and on ADICUP3029. 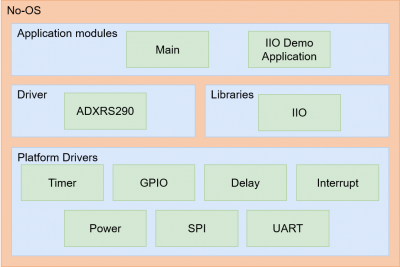 There are two basic ways to program the ADICUP3029 with the software for the ADXRS290.


Using the drag and drop method, the software is going to be a version that Analog Devices creates for testing and evaluation purposes. This is the EASIEST way to get started with the reference design.

Importing the project into CrossCore is going to allow you to change parameters and customize the software to fit your needs, but will be a bit more advanced and will require you to download the CrossCore toolchain.

The software for the ADICUP3029_ADXRS290 demo can be found here:

To build the project from source, follow the instructions in the no-os wiki.

The EVAL-ADXRS290-PMDZ can be used with a Raspberry Pi.

In order to control the EVAL-ADXRS290-PMDZ from the Raspberry Pi, you will need to install ADI Kuiper Linux on an SD card. Complete instructions, including where to download the SD card image, how to write it to the SD card, and how to configure the system are provided at Kuiper Images.
Write the image and follow the system configuration procedure.

Follow the Hardware Configuration procedure under Preparing the Image: Raspberry Pi in the Kuiper Images page, substituting the following lines in config.txt:


Setting up the Hardware

To set up the circuit for evaluation, consider the following steps: 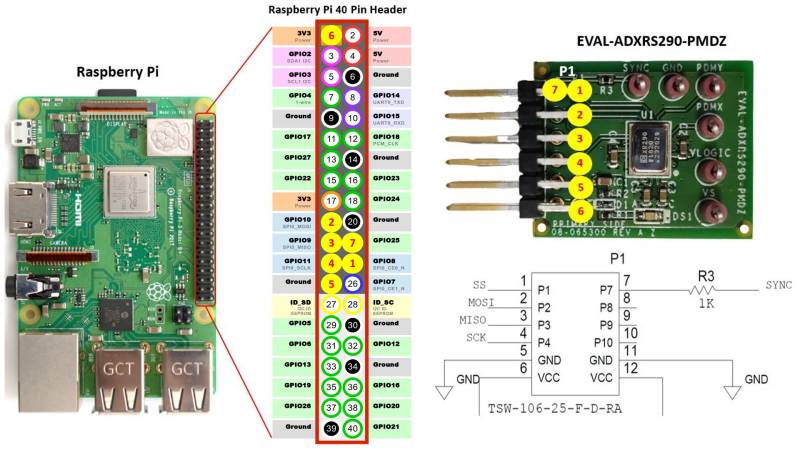 Do note that the I/O pins of the Raspberry Pi board are only 3.3V tolerant. Any peripheral to be attached should be powered by a source not exceeding 3.3V. 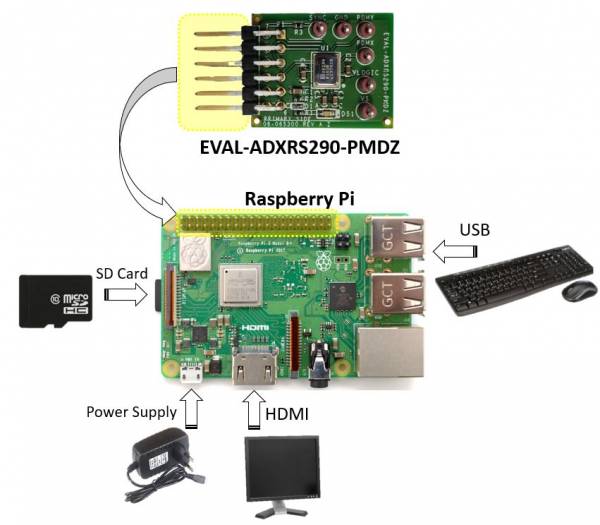 Software (both ADICUP3029 and Raspberry Pi)

To be able to connect your device, the software must be able to create a context. The context creation in the software depends on the backend used to connect to the device as well as the platform where the EVAL-ADXRS290-PMDZ is attached. Two platforms are currently supported for the ADXRS290: Raspberry Pi using the ADI Kuiper Linux and the ADICUP3029 running the ADXRS290 IIO demo project. The user needs to supply a URI which will be used in the context creation.

The Libiio is a library for interfacing with IIO devices.

Install the Libiio package on your machine.

The iio_info command is a part of the libIIO package that reports all IIO attributes.

Upon installation, simply enter the command on the terminal command line to access it.

Do note that the Windows machine and the RPI board should be connected to the same network in order for the machine to detect the device.

For Windows machine connected to ADICUP3029:

There are different commands that can be used to manage the device being used. The iio_attr command reads and writes IIO attributes.

The iio_reg command reads or writes SPI or I2C registers in an IIO device. This is generally not needed for end applications, but can be useful in debugging drivers. Note that you need to specify a context using the -u qualifier when you are not directly accessing the device via RPI or when you are using the ADICUP3029 platform. 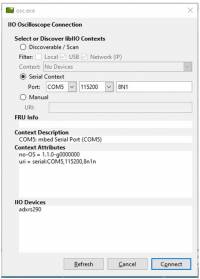 Below is the Debug panel of ADXRS290 wherein you can directly access the attributes of the device. 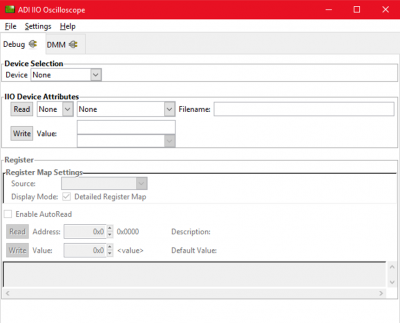 Access the DMM panel to see the instantaneous reading of the X and Y's angular velocities. 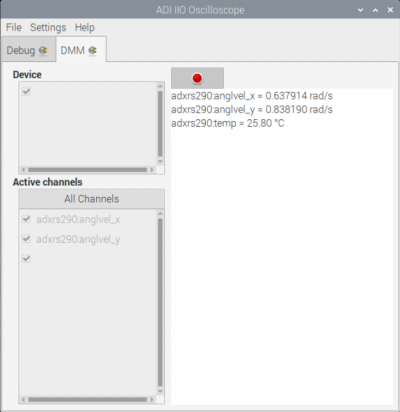 The Waveform panel, also known as the Capture window, displays the real-time waveform of ADXRS290's response. 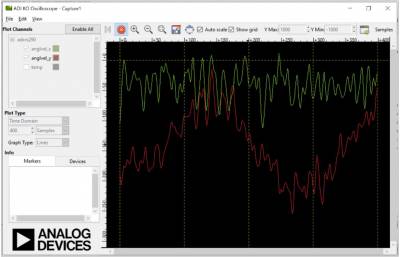 The readings from the DMM panel will freeze upon activation of the real-time plot in the waveform panel i.e. the two panels are designed to be used separately and not simultaneously.

PyADI-IIO is a python abstraction module for ADI hardware with IIO drivers to make them easier to use. This module provides device-specific APIs built on top of the current libIIO python bindings. These interfaces try to match the driver naming as much as possible without the need to understand the complexities of libIIO and IIO.

The ADXRS290 example requires a number of packages to be installed before it can be used. To ensure that all required packages are present, we will be installing them in a virtual environment so that other python projects will not be affected by this added configuration. Make sure that virtualenv has been installed before proceeding.

Upon activation of the virtual environment, enter the following commands:

One of the packages in requirements_adiplot.txt is the PyQt5. If you already have a pre-installed PyQt5 prior to the installation of the packages, we suggest that you uninstall the said package in the virtual environment. Duplicate installations may sometimes cause errors that inhibit the system from displaying the real-time plot. This can easily be done by inputting the command: pip uninstall PyQt5 while the virtual environment is active.