The Data Pattern Generator is a bench-top instrument for driving vectors into Analog Devices' high-speed Digital-to-Analog converters. The DPG connects to a PC over USB, and allows a user to download a vector from their PC into the DPG’s internal memory. Once downloaded, the vector can be played out to an attached Evaluation Board for a specific DAC at full speed. This allows for rapid evaluation of the DAC with both generic and customer-generated test data.

Please note: Analog Devices' pattern generators and high-speed DAC evaluation boards are designed and sold solely to support an efficient and thorough means by which to evaluate Analog Devices high speed DACs in a lab environment for a wide range of end applications. Any application or use of the pattern generators and/or high-speed DAC evaluation boards, other than specified above, will not be supported.

The DPG2 has been replaced by the DPG3. For information on the software used to control the DPG2 and DPG3, see the High-Speed DAC Software Suite page.

The part number for the DPG2 is AD-DAC-DPG-BZ. 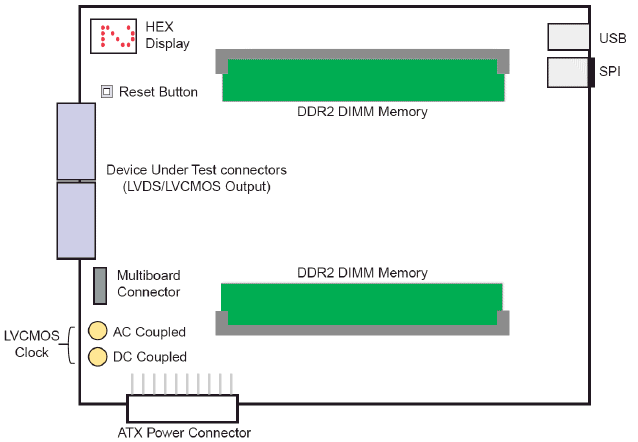 The DPG2 has two 16-bit ports capable of interfacing with both LVDS and LVCMOS devices. When transmitting a data vector each sample from the data file is played sequentially on the output port. Note that while the two data ports are labeled “I” and “Q” in the pinout, the actual mapping of bits to DACs will depend on the particular evaluation board connected. Many DACs with interfaces of 16-bits or less will only use a single port (generally the “I” port).

The DPG also provides an output clock, DCI, which is synchronous with the data leaving the DPG2.

The left “decimal point” on the display indicates if the DPG2 has been “configured”. If the left point is not lit, the DPG2 will need to be configured before any other operations.

There are two SMA jacks location on the DPG2 (J12 and J13). These are an optional input clock path for use with older CMOS interface DAC evaluation boards.

Up to four DPG2's can be synchronized together so that the LVDS data coming out of all the DPGs is aligned to a common clock. Synchronization is not supported with the CMOS interface. 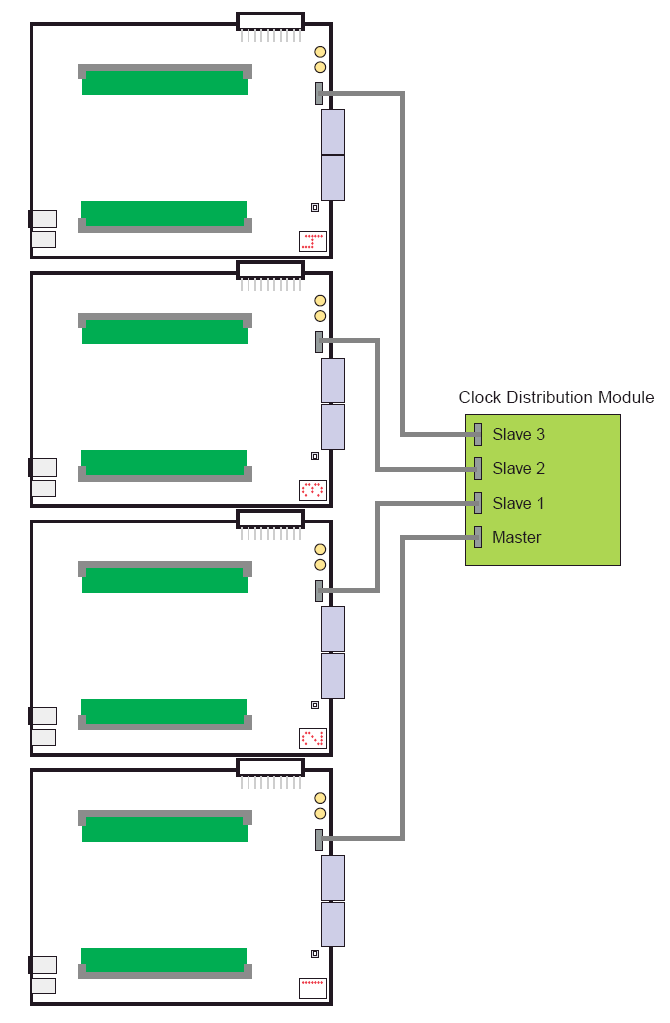 The synchronization system works by having the Master unit forward the clock it receives (from the evaluation board attached to the Master) on to the Clock Distribution Module. The module then sends this clock back out to each unit, including the Master. The trace lengths and cables are all very well matched, and ensure that the clocks arrive at each slave DPG2 at the same time. The DPG2s then use this clock, instead of the clock from their respective evaluation board, to clock the data.

2. Connect a DAC board up to each DPG2 as you normally would, except only connect one of the DAC eval board to USB. Power up the eval boards.

3. Configure the DAC eval board as you would like with the SPI program. Then disconnect the USB, and connect it to the next eval board, configure it, and so on until all eval boards are setup.

4. With all the DPG2s powered on and connected to USB, open DPGDownloader. It should see all the DGP2s, and have a separate “panel” for each. On the left side of each panel, there is an option that defaults to “Single”. On the Master DPG2, change this to Master, and on the others change it to Slave.

5. Import or create the vectors you want the DACs to play out, and assign them to each DAC. You can correlate each DAC in the software with the number displayed in red on the DPG2 itself.

6. Download the vectors to all the DPG2s. Hit play on all the units except the Master. This arms the slaves to be ready to transmit.

7. Hit Play on the Master unit. This starts playback on all the units.

The left connector when looking at the connection on the DPG from the evaluation board side (J17 on the DPG2, J8 on the DPG3)

The right connector when looking at the connection on the DPG from the evaluation board side (J18 on the DPG2, J10 on the DPG3)

Please contact DPG Support with any additional questions regarding the DPG or DAC Software Suite.