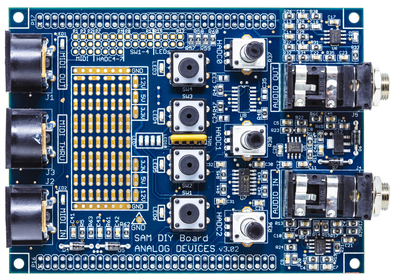 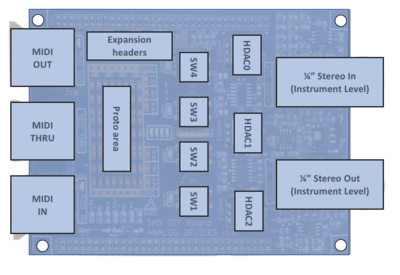 The Audio Project fin includes stereo 1/4“ input and output jacks. These signals are routed to the AUX input and HP output interfaces on the ADAU1761 audio codec.

The Audio Project Fin includes MIDI IN, OUT and THRU connectors. The MIDI IN and OUT signals are routed to UART1 on the ADSP-SC589. MIDI events can be generated on any of the three cores using the UART_Simple driver in the baremetal framework.

The Audio Project Fin includes four pushbuttons (SW1-4). These buttons can be accessed from any of the three cores although by default they're managed by the ARM core. The pushbuttons can also be routed to external switches, such as those mounted to the chassis of a stomp box, using the expansion header. These signals already contains pull-up resistors and de-bouncing logic so the SW1-4 connectors on the expansion header can be connected directly to an external switch with no additional components.

The Audio Project Fin includes three POTs which connect to the Housekeeping ADC (HADC) on the ADSP-SC589. Four additional analog inputs are available in the expansion header which connect to HADC3-6. These signals are buffered via unity gain, non-inverting op-amp circuit that also provides a low-pass filter around 1KHz. This expansion header also includes 3.3V and GND so this three pin connector (described in more detail below in the Expansion Header section) can be connected directly to a Pot.

There are a total of 8 LEDs on the Audio Project Fin. An LED is located below each push button which can be used to indicate when certain effects are active, for example. There are also four additional LEDs configured as a VU meter in the prototyping area.

In addition to the LEDs on the Audio Project Fin, there is also a connection to four external LEDs in the Expansion Header which is described in more detail below. These

A small expansion header is provided to connect to external LEDs, POTs, push buttons and MIDI interfaces that might be located on a stomp box or rack-mount chassis. The diagram below shows which signals the pins on this header connect to. 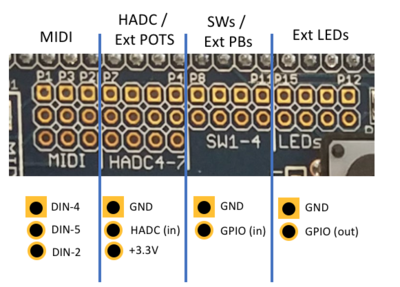