This page gives an overview of using the 'ARM Mbed' platform supported temperature measurement firmware example with Analog Devices AD7124 Evaluation board and SDP-K1 controller board (or any other Mbed supported target board). The firmware example is console based, which provides an user-interactive menu options for user to select and configure the multiple temperature sensors at different instances, such as 2/3/4-wire RTDs, NTC Thermistors and Thermocouples.

The connection block diagram is described below:

This code has been developed and tested on SDP-K1 Controller Board using the on-board Arduino/SDP-120 Headers. However, same code can be used without or with little modifications on any other Mbed supported board which has Arduino Header Support on it, such as STM32-Discovery, STM32-Nucleo, etc.

Connect the VIO_ADJUST jumper on the SDP-K1 board to 3.3V position to drive SDP-K1 GPIOs at 3.3V.

For AD7124 evaluation board connections and jumper settings, refer the respective evaluation board manual. Arduino connector is used as default interface type for both the boards in the software.

SDP-K1 is powered through USB connection from the computer. SDP-K1 acts as a serial device when connected to PC, which creates a COM Port to connect to serial terminal (console based application) running on windows-os. The COM port assigned to a device can be seen through the device manager for windows based OS. 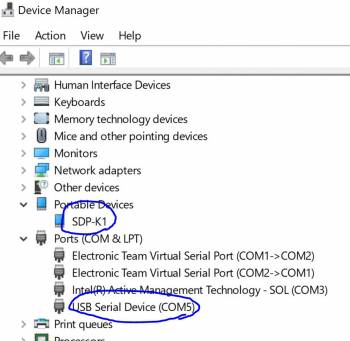 Latest firmware (Use below link):

If you have some familiarity with the Mbed platform, the following is a basic list of steps required to start running the code: 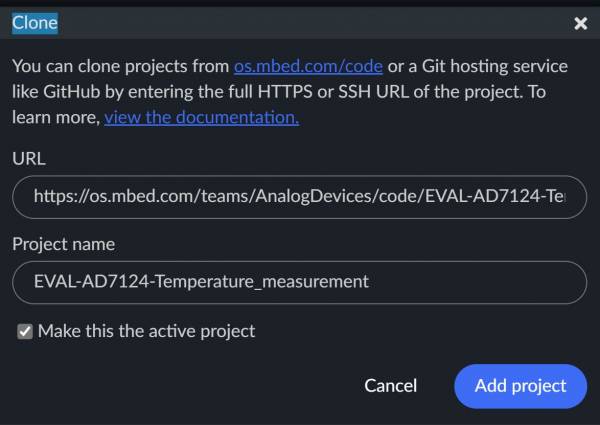 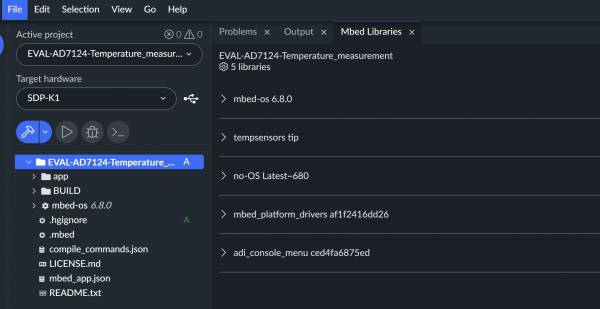 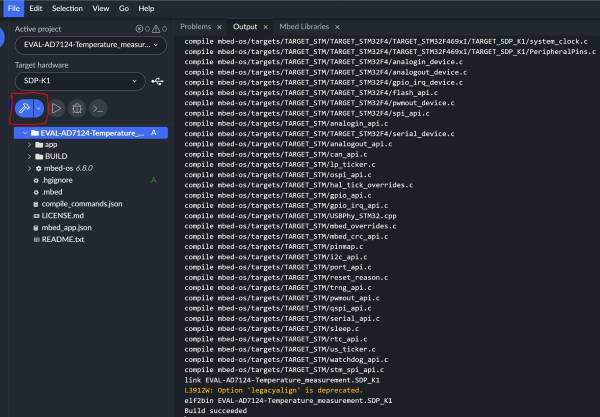 Configure your serial terminal ( Tera Term) for below settings:

The AD7124 temperature measurement example main menu looks like below (with Tera Term):

The firmware is designed to be intuitive to use, and requires little explanation, simply enter a number corresponding to the required command and follow the on-screen prompts.

Firmware allows user to perform the measurement for single or multiple (more than one) temperature sensors of same type. Below sensors are supported:

In order to use analog inputs AIN4 and AIN5 on Legacy AD7124 Eval board (with SDP-120 interface only) in any of the demo mode, make sure to route the sensor connections directly through LK6 link, instead of physical screw-terminal connector. Make sure LK6 link is removed for the same purpose. 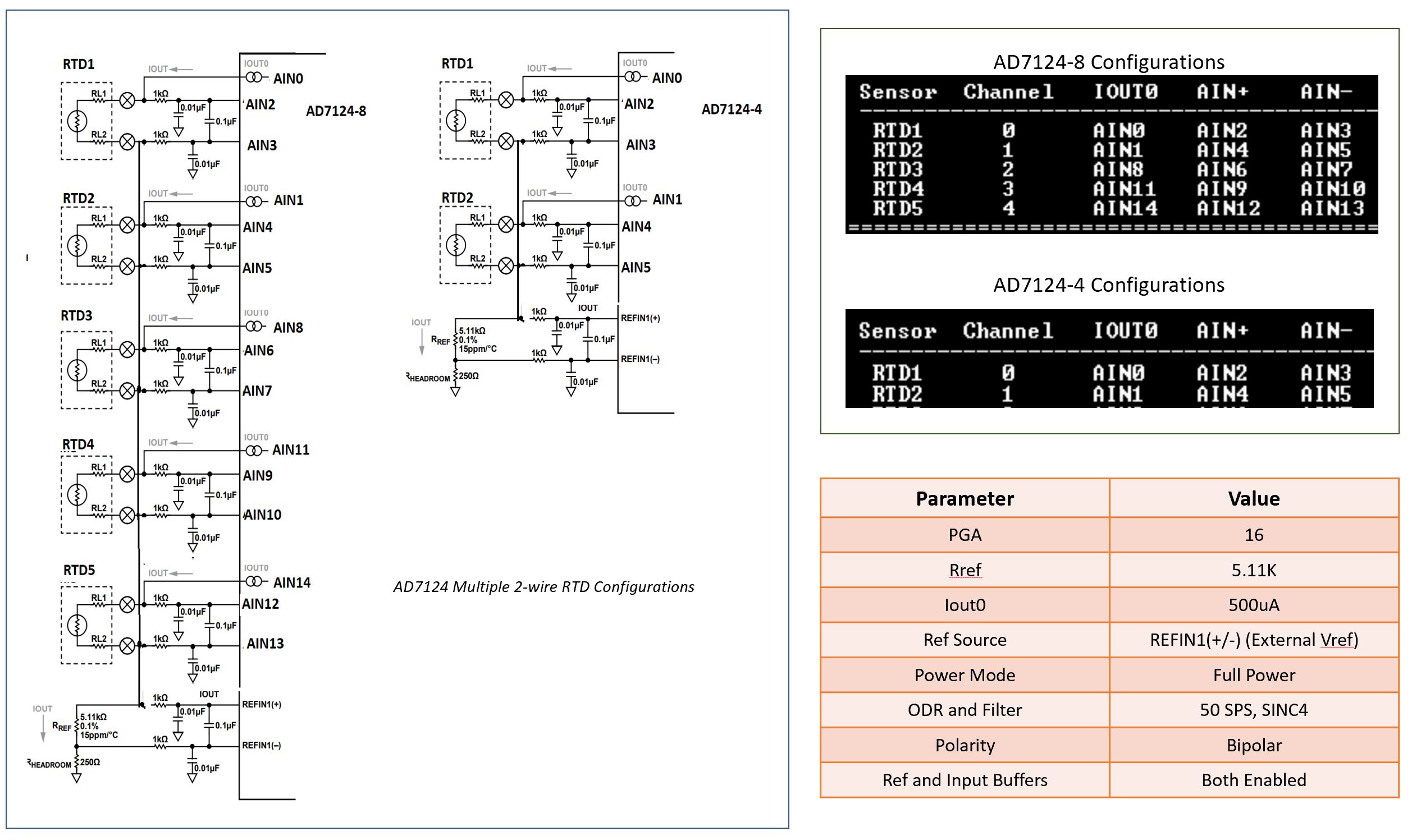 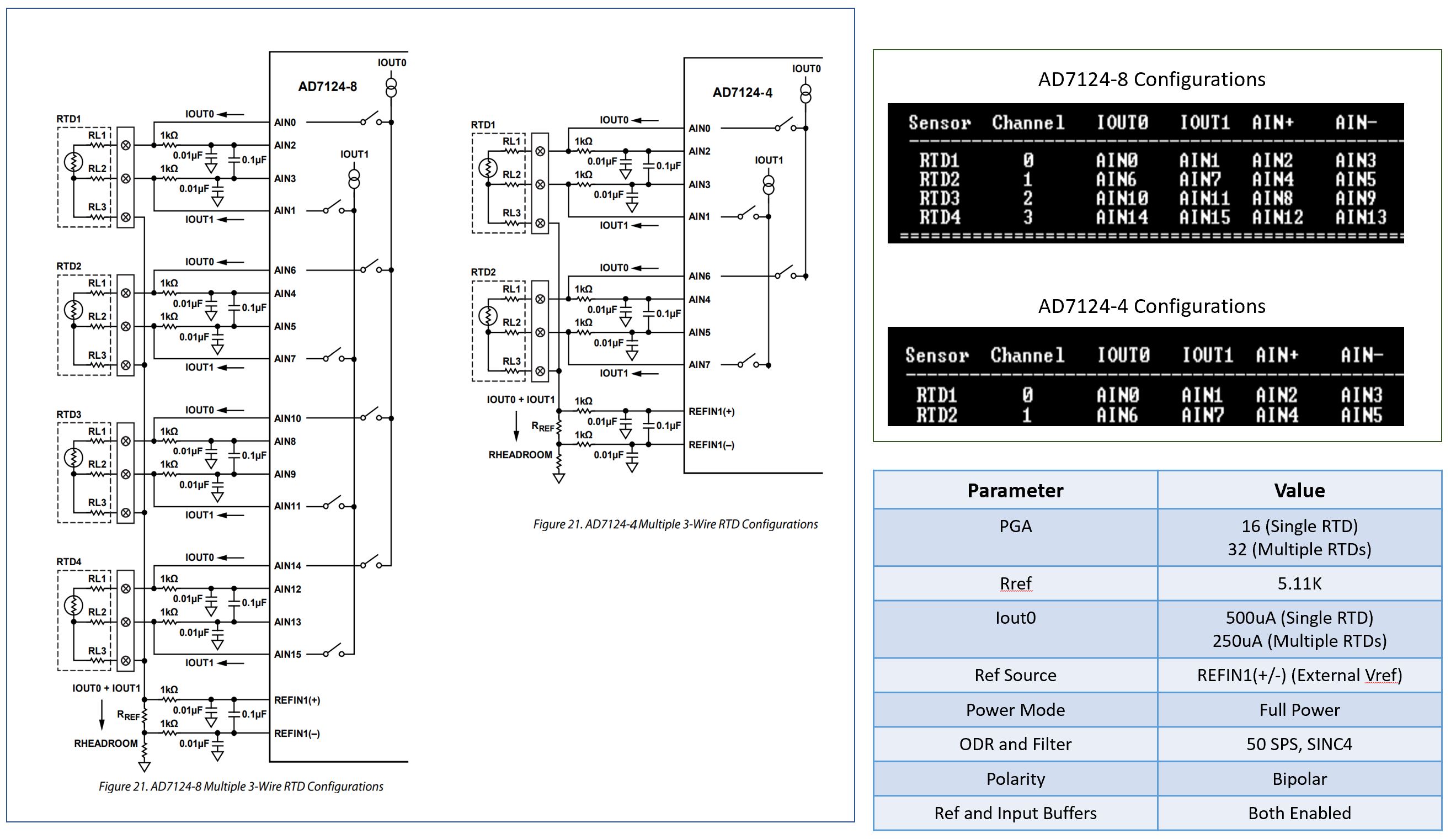 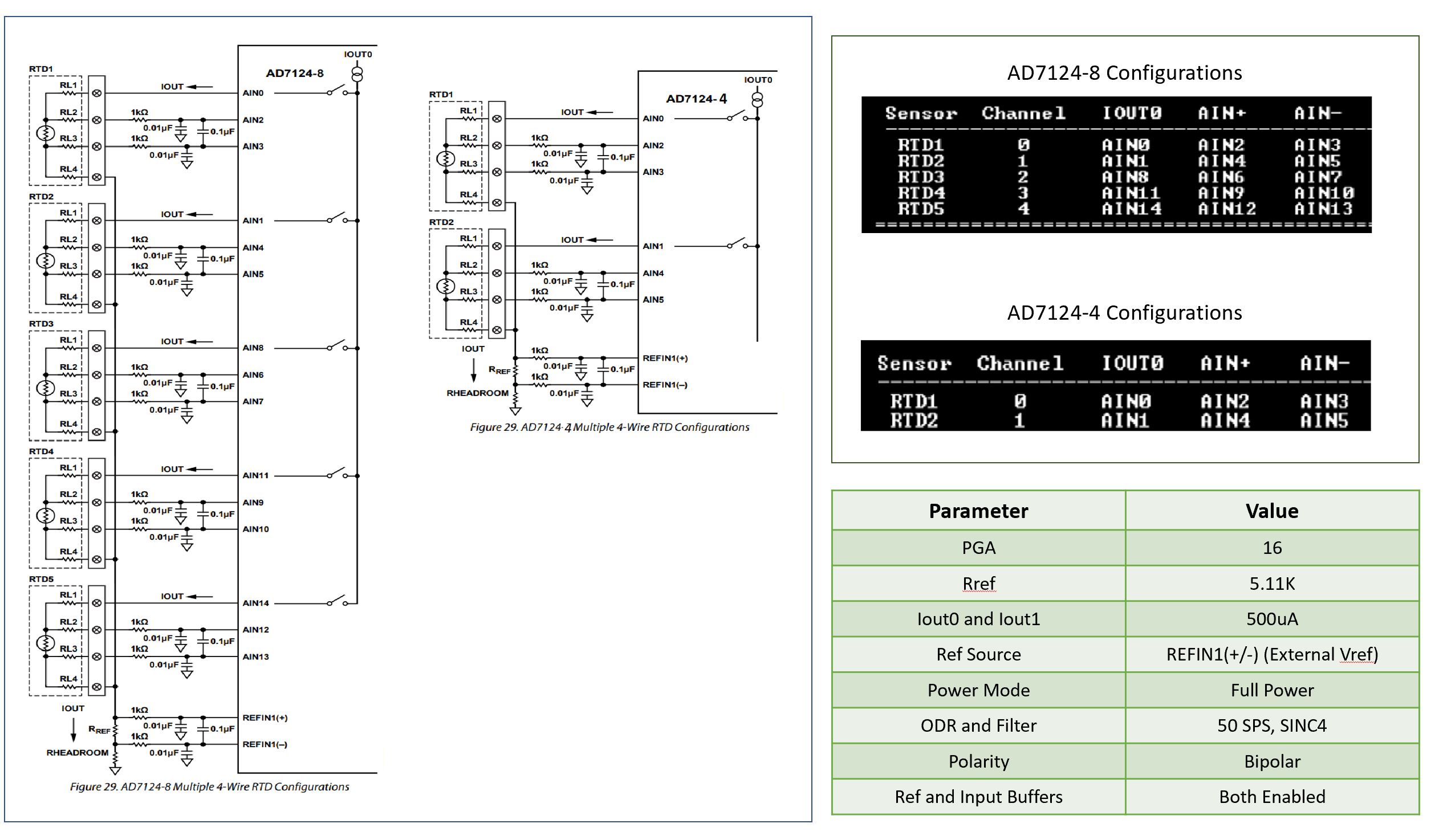 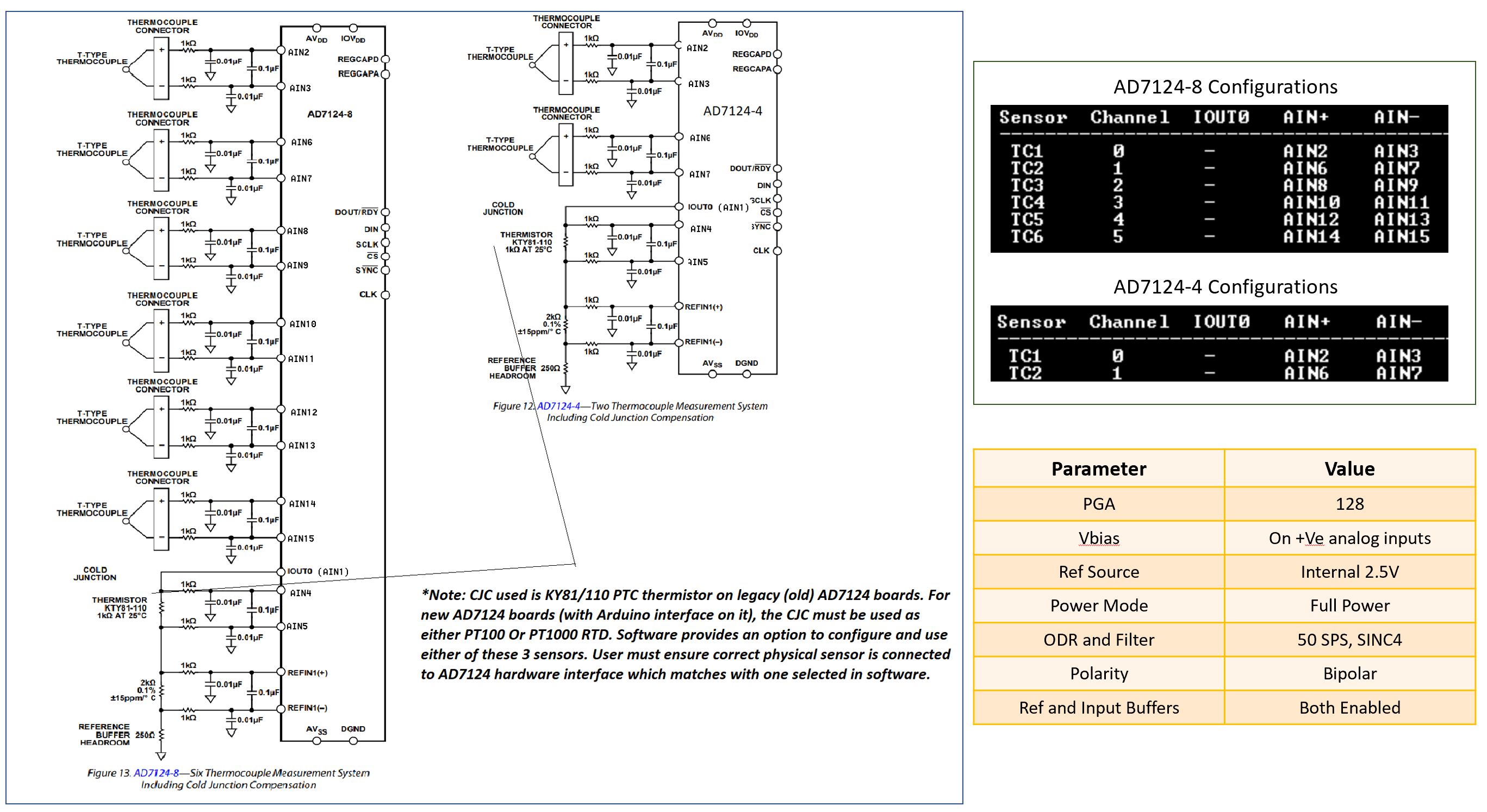 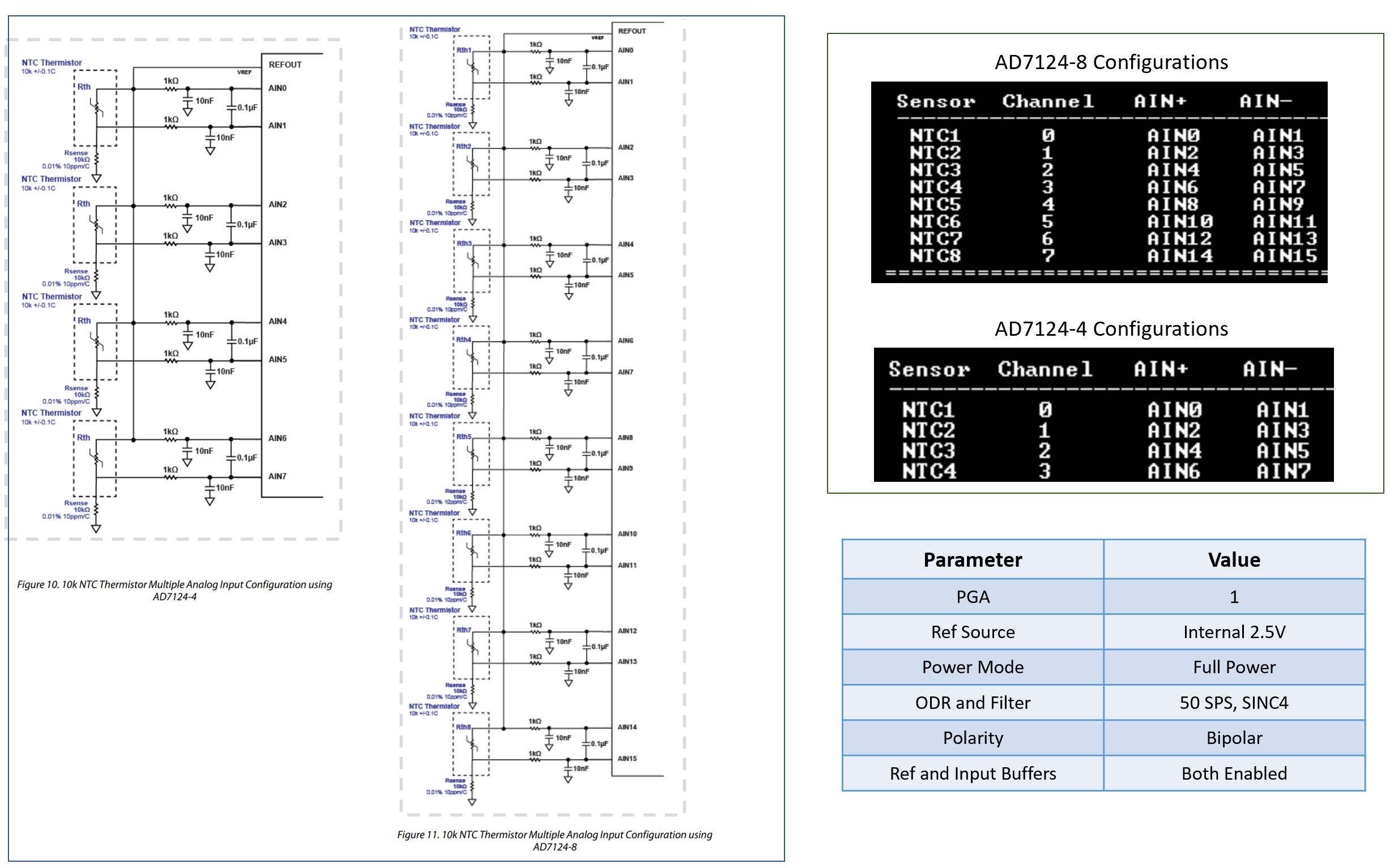 Firmware provides an option for user to perform calibrated measurement on 3-wire RTD sensors. There are two types of calibration options available in the firmware. User must modify sensor hardware connections according to configuration defined in the software. Based on selected calibration type, the sensors are first calibrated and then 3-wire RTD measurement is performed on them. For more information on the calibration scheme, refer the design note on RTD measurement. 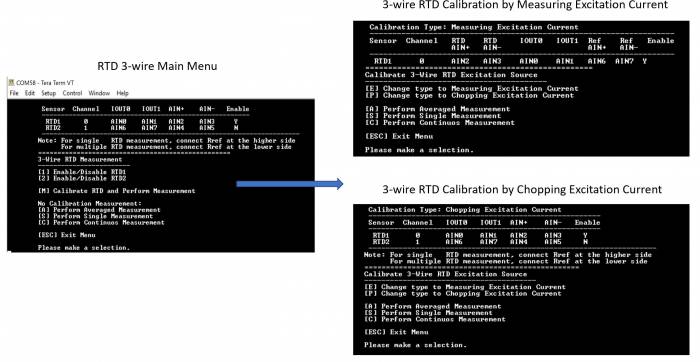 Calibration is allowed to perform only on Multiple RTD sensors and not on a single RTD sensor. 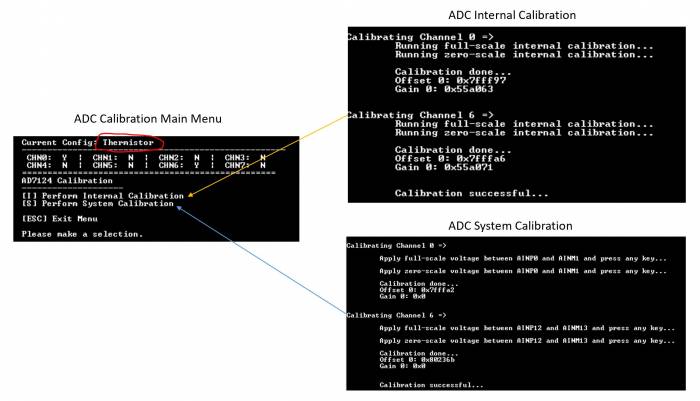 This file can be used to:

This file defines the user configurations for the AD7124, such as SPI parameters (frequency, mode, etc) and other init parameters used by No-OS drivers to initialize AD7124 device. These are the parameters loaded into device when device is powered-up or power-cycled.

This file defines the functions which acts as wrapper for calling 'tempsensor' library functions to calculate the temperature based on resistance or voltages. The fixed sensors such as NTC 10K, T type thermocouple, PT100/PT1000 RTD are used.

The functionality related with No-OS drivers is covered in below 2 files:

It is hoped that the most common functions of the AD7124 are coded, but it's likely that some special functionality is not implemented. Feel free to consult Analog Devices Engineer-Zone for feature requests, feedback, bug-reports etc.
resources/tools-software/product-support-software/ad7124_temperature_measurement_demo.txt · Last modified: 20 Jul 2022 07:12 by Mahesh Phalke