In a few of the designs we have done, like the PlutoSDR and M2k there hasn't been enough room on the PCB for serial and JTAG, so we put it on a small breakout board, which communicates to the main platform with a small 10-pin ribbon cable, which is known as the ADALM-UARTJTAG.

This includes the Silicon Labs CP2103-GM USB to UART bridge, which you can plug a USB cable into.

This also includes connection to Xilinx JTAG cable as well. You will need a Xilinx JTAG Cable or equivalent to use it.

Analog Devices provides a small adapter board ADALM-UARTJTAG to be used for JTAG and UART, in order to make that easier for programming and debugging. You are encouraged to use this on your designs for the same reason we do - the standard JTAG connector is huge, and there are times where good old fashion console UART is valuable for doing debug. The 1.8V supply on the connector above is the I/O voltage, and can be used anywhere between 1.8V and 3.3V.

In the box, you should have received the UARTJTAG board, ribbon cable, jumper, and Samtec FTSH-105-01-L-D 10 position dual row 0.05“ through hole pin connector.

The PCB includes a jumper, which forces the Zynq to HALT on JTAG. This is great for halting, and not allowing anything to run, but does pull down a chip select for SPI flash, and will not allow the SPI flash to be found by the on-chip bootloader, or by U-Boot. (If you are loading a U-Boot over JTAG).

The pin connector is likely inserted into the ribbon cable: 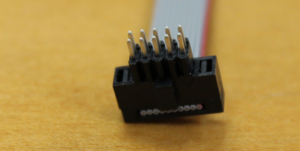 but can be removed, and either soldered to the PCB, or left in the ribbon cable, so you don't lose it. 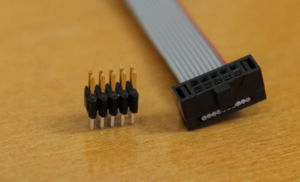 If you do want more, they can be obtained from Samtec, Digikey or Arrow.

Anyone is free to use the same pinout on their platform - or copy the schematics and make it themselves.