Multichannel analog inputs for the ADALM1000 Using the CD4052

The two analog input channels of the ADALM1000 (M1k) provide a high input impedance and wide dynamic range which is very helpful for many of the measurements that students would be making around their laboratory activities. However, there are only the two analog inputs. Often, there are many more than two signals in the circuit or system under investigation that the students would like to monitor. Or there could be a number of low bandwidth sensors, such as ambient temperature or light levels around a room, that need to be measured or monitored over a long duration of time when gathering experimental data. Any number of external analog multiplexer integrated circuits could be used to expand the number of voltage input channels. The widely available CD4052 dual 4 to 1 analog multiplexer IC can be used can be used for this purpose. Note that the 74HC4052 version has a much lower Ron than the higher voltage CD4052. In addition the PDIP versions of the MAX4618 and MAX4582 are pin compatible with the industry-standard 74HC4052.

The first configuration of this multiplexer uses one of the 4 to 1 multiplexers in the CD4052 to switch up to four different signals into the M1k BIN pin, as shown in figure 1. The green labels indicate connections to the 8 pin analog connector on M1k. The light blue labels indicate connections to the 6 pin digital connector on M1k. The red, orange, purple and yellow labels for the Mux inputs match the colors of the controls in figure 2. Digital outputs PIO 0 and PIO1 are used by the software to select between the four mux channels on alternating sweeps. The PIO 2 digital output controls the Mux Inhibit input. The four Mux input signals along with AIN provides a total of five scope voltage traces. This configuration can be used with or without turning on AWG Sync. When the AWG Sync mode is off the AIN signal waveform can be used as the trigger signal. The CHA or CHB current waveforms can of course also be used as a trigger source. 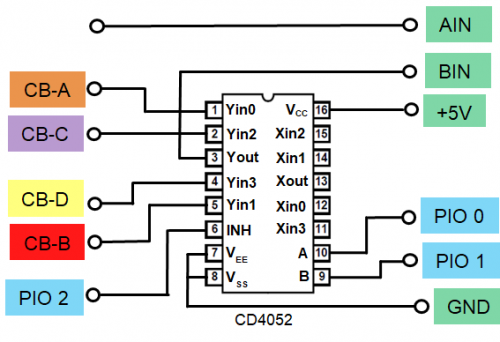 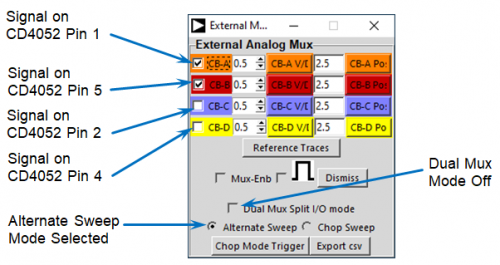 The connections for this Mux chopping mode are shown in figure 3. Two Mux channels in the CD4052 are used to multiplex two signals into the AIN and BIN inputs for a total of four scope voltage traces sampled at 25 KSPS. The channel A AWG output is used to drive the mux so it is not available for other uses but the channel B AWG output can be used for any purpose. So in this configuration one of the AWG channels is traded off for getting the third and fourth input signals. 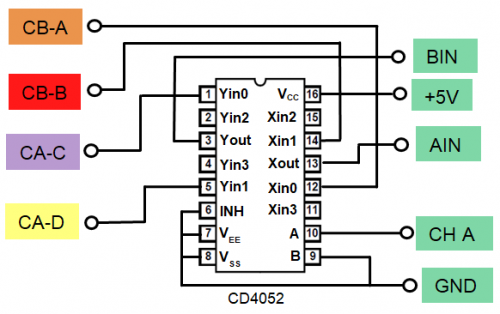 How to set the External Analog Mux control settings for this configuration is shown in figure 4. Four mux channels are being used, any or all of the traces can be enabled. The Dual Mux check box should be checked (on). The Chop Sweep radio button should be selected. 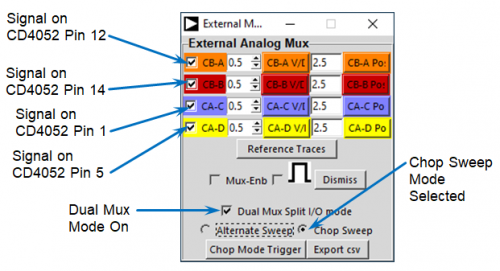 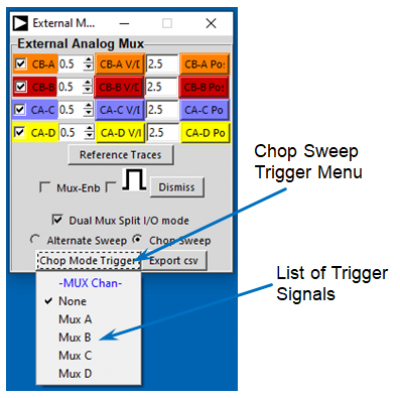 The wiring connections to the CD4052 are relatively simple and can be often built on the Solder-less breadboard along with the rest of the experiment circuitry. However, this might not always be a workable solution so a small PCB adapter has been designed. Figure 6 is a rendering of the top of the PCB.

To use the board in the Chop Sweep configuration, short jumper SJ3 to connect AIN to the X side of the Mux. The CH A AWG output which appears on the second pin from the left on the ANALOG2 header is connected to the left most pin on the CTRL header with the other two CTRL pins grounded.