The objective of this Lab activity is to:
1. Measure component impedance and circuit impedance using the ALICE-VVM Impedance Analyzer software.
2. Study the magnitude and phase changes with change in frequency for an RLC circuit.

Where ω = 2πf is the angular frequency.

For an inductor, the impedance (or more specifically, the reactance) XL is imaginary and can be represented as a line along the positive y-axis of the 2-D plot. The reactance of the inductor also depends upon the frequency and is given as:

The impedance of a series RLC circuit is the sum of the impedances of respective components.

This can also be represented as a phasor vector on a polar plot with: 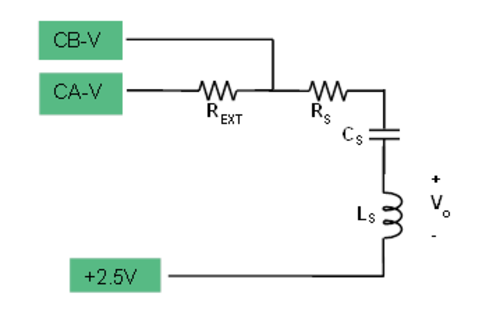 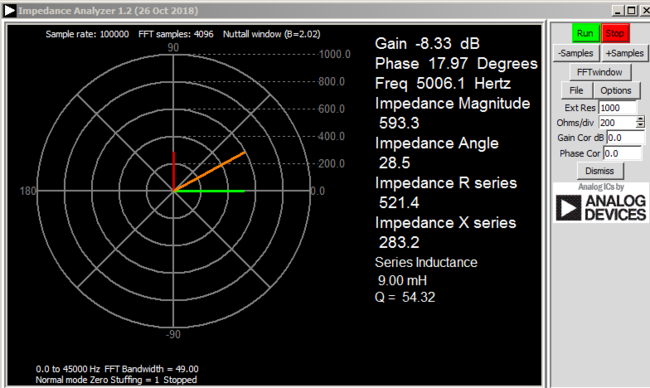 A. Measurement of Component Impedance:

3. Note down the magnitude, phase, resistance and reactance for the resistor in the table shown in figure 3. Note that the default frequency is set to 1000 Hz. Verify that the phasor is along the real axis and the phase is zero. Also the magnitude should be the same as resistance since the reactance is zero.

4. Replace RS with CS = 1.0 uF, Similarly note down the magnitude, phase, resistance and reactance values. For the capacitor, the phasor should be along the negative imaginary axis and the phase should be 270 or -90 degrees.

5. Replace CS with LS = 20 mH, Similarly note down the magnitude, phase, resistance and reactance values. For the inductor, the phasor should be along the positive imaginary axis and the phase should be 90 degrees.

B. Measurement of Circuit Impedance and Effects of Frequency on RLC circuit: 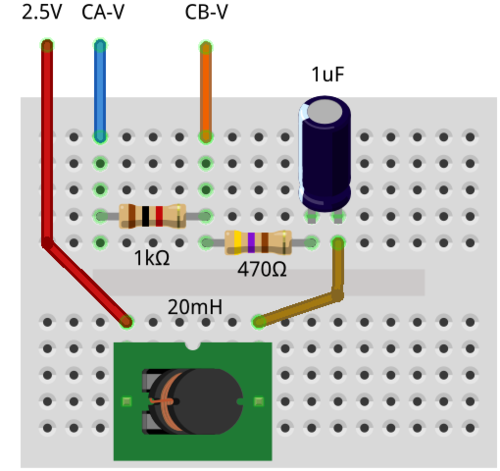 2. Note down the magnitude, phase, reactance and resistances for the RLC circuit at the default frequency of 1000 Hz. Record the values in table shown in figure 3.

3. Adjust the frequency till the phase becomes zero and note down this frequency. This is a special frequency where the total reactance is zero and the circuit is purely resistive.

Thus, the impedance of the RLC circuit is now just the resistance. The frequency at which this occurs is called resonant frequency. It can be mathematically derived using equation (1) to be:

1. Compute the resonant frequency fo for the series RLC using equation (2) and compare it to the measured value. What is the percentage error between the two?

2. Give your conclusions from the observations made in step (4) of the procedure.

3. Compute the magnitude and phase for the series RLC circuit, when the reactive component equals the resistive component.