The simplest form of a voltage level shifter as shown in figure 1, uses a pass NMOS device and a pull up resistor. If VIN at the input is at a logic low ( source of MN1 ) the output ( drain of MN1 ) goes to ground. MN1 will be on because its gate is connected to VLV and drives VOUT to ground. Conversely if VIN is at a logic high the source is at VLV. With the gate of MN1 also at VLVI it will now be off which allows VOUT to be pulled up to VHV by resistor RHV.

Similarly for a high voltage to low voltage level shifter if the input and output of the circuit is reversed, the definition of the source and drain of MN1 will be reversed. If VIN is at a logic low the right hand side of MN1, now the source , goes to logic low turning on the transistor ( gate connected to VLV ) and drives VOUT to logic low. With VIN is at a logic high, the right hand side of MN1 is now equal to or more positive than either the gate or left side of MN1. The left side will now be considered the source and will be pulled up to VLV by RLV. With the gate also at VLV it will now be off which allows VOUT to be pulled up to VLV only by resistor RLVand not the input signal.

As we can see the same circuit can be used bidirectionally to translate signals in either direction between VLV and VHV. 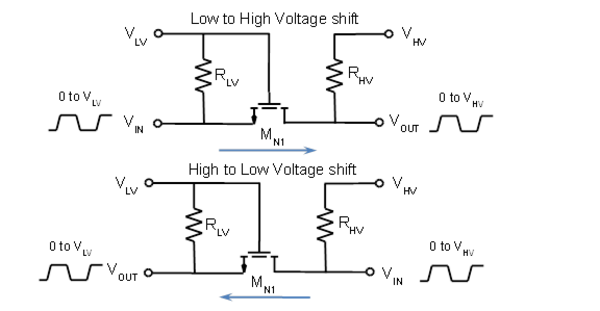 The ON resistance of the pass NFET, and the parasitic capacitance of the signal lines mainly determine the fall time of the output signal. Also, the rise time of the output signal is determined mostly by the value of the pull-up resistor on the output and the signal-line parasitic capacitance assuming the pass NFET turns off instantaneously, which is not generally the case but we assume it is for this discussion. An annoying aspect of resistor loaded level shifters such as this is the DC current that flows in resistors RLVand RHV. For the Low to High shifter a current equal to VLV/RLV flows when VIN, and VHV/RHV with VOUT low. As was just pointed out the transition time for the output is a function of RHV and any parasitic capacitance and there will be a trade-off between power dissipation and speed which will determine the optimal value for the pull up resistors.

Build the circuit shown in figure 2 on your solder-less breadboard. Start by using 1 KΩ resistors for RLV and RHV. Use CHA-V to drive VIN and use the positive power supply, the fixed 3.3 V supply from the digital port connector for VLV. The fixed +5 V supplies VHV. Scope CB-H will be used to view the output waveforms. 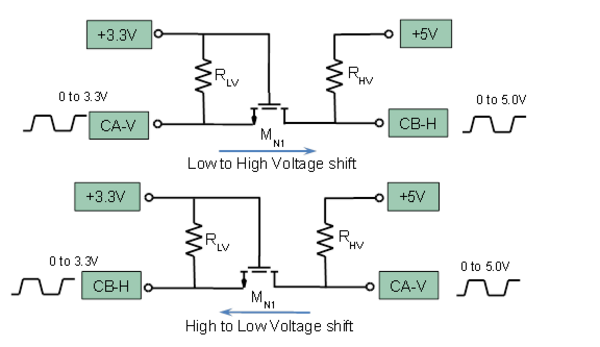 Display CHA-V and CHA-I traces to monitor the input signal. and CHB-V trace to observe the rising and falling edges of the output waveform. Replace the 1 KΩ resistors, RLV and RHV, with 10 KΩ, 47 KΩ and 100 KΩ resistors and compare the relative rise / fall times and CHA max current for each value. Do this for both the Low-High shift and High-Low shift configurations.

Are there any differences in delay or rise/fall times between the different pull-up resistor values of the level shifter? If so why? Compare the measured CHA max current for each resistor value and configuration. Are there any difference between the low to high vs high to low configurations especially for the higher values of RLV and RHV? If so explain why.

Two NPN transistors can be substituted for the single NMOS transistor connected as shown in figure 3. When the Enable input is high, a low-going input signal drives the emitter of one of the transistors as a common-base amplifier. The 10-kΩ resistor in the base circuit provides enough current to saturate the transistor and drop the VCE voltage to approximately 0.1 V, thereby pulling the output side low. 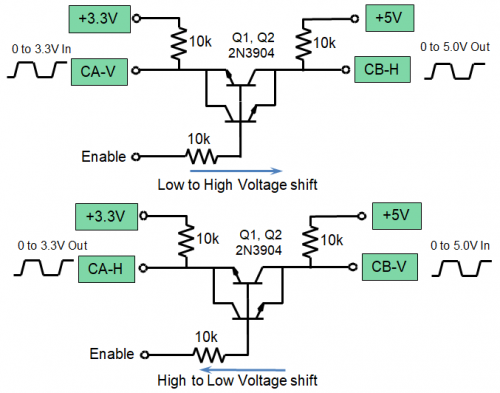 For extra credit try substituting the fixed 2.5 V supply for VLVand using either the fixed 3.3 V or fixed 5 V supply for VHV. Be sure to adjust the MAX voltage setting for the CHA output depending on which supplies are being used for VLV and VHV.