Interfacing SigmaDSP Processors with a Microcontroller

This guide describes how to integrate a SigmaDSP processor into microcontroller-based systems.

Microcontrollers are available in a wide variety of architectures and capabilities, so rather than creating a fully-featured SigmaDSP library for every processor, we focus here on the principles behind successful SigmaDSP integration so that users can complete designs quickly and efficiently.

Arduino-compatible example code, attached below includes a simple program to boot ADAU1701, ADAU1761, or ADAU1467 processors without any modification. It is written for the Teensy 4.0, so pin assignments should be adjusted for use on other platforms. Teensy 4.0 was chosen because it is easy to use and has enough memory to store even the largest SigmaDSP program. Version 1.1.0 of the code is also tested and working on ESP8266 (with minor changes described below).

All current SigmaDSP processors are equipped with I2C and SPI control ports. Connecting your microcontroller to one of the control ports allows you to download a SigmaDSP program, read/write registers, and update program parameters on the fly.

SPI is the fastest protocol for communicating between a microcontroller and SigmaDSP processor. Depending on your chosen SigmaDSP the SPI SCLK frequency can be set as high as 20 MHz. It requires four pins on your microcontroller, preferably a hardware SPI port; software SPI implementations are possible but will typically incur high overhead on a microcontroller.

I2C is a slower protocol. Most SigmaDSP processors support a maximum SCL frequency of 400 kHz, although ADAU146x processors are specified up to 1 MHz. I2C requires two pins on your microcontroller, preferably a hardware I2C port; software I2C implementations also incur some microcontroller overhead.

There are many other reasons why either I2C or SPI might be more suitable in your device. For simplicity we won't go into those reasons here. If you are not sure which to use, go ahead and post a question in the EngineerZone support forum. If you describe your application we can guide you through your choice.

In the example code you can switch between I2C and SPI code by toggling #define USE_SPI in USER_SETTINGS.h. To save memory, code for the unused interface will be excluded by the compiler.

Logic levels on your microcontoller must be the same as the IOVDD supply of your SigmaDSP, or level shifters should be used. The Arduino Uno uses 5V logic by default which is not directly compatible with SigmaDSP processors.
It is recommended to connect your microcontroller to a working SigmaDSP evaluation board before attempting to program a custom board and verify working communications between the microcontroller and DSP. This allows you to separate the firmware debug process from the hardware debug process. 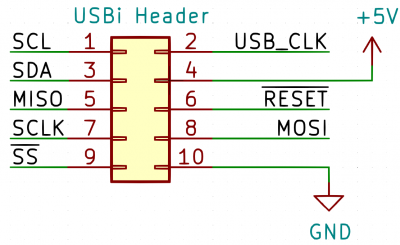 USB_CLK is not a required signal for SigmaDSP development boards, so it is usually left as an open circuit.

Please reference the schematics for your evaluation board's User Guide, which can be found on its product webpage, to determine which interfaces are exposed on connectors. Also note whether your evaluation board includes pull-up resistors on the SCL, SDA, and /SS pins; if they are not present, you must add them.

The EVAL-ADAU1701MINIZ schematic shows that only I2C is available on the programming header (pins 1 and 3). Additionally, there are no I2C pull-up resistors shown in the schematic so they must be provided by your own hardware. The header also includes a reset pin (pin 6) and 5V power pin (pin 4). In the example code ADAU1701 is referred to as a “Sigma100” processor.

The evaluation board uses 3.3V logic levels. Level shifters are recommended for interfacing with 1.8V or 5V microcontrollers.

The 5V power pin (Pin 4) can be connected to your microcontroller's VUSB pin if sufficient current is available. Be careful not to exceed 500mA total current draw from a USB port.

The ADAU1761 (referred to as Sigma200) has a similar pinout to the ADAU1701, although I2C pullup resistors are already in place on the board. The evaluation board schematic is available here.

EVAL-ADAU1761Z also allows Pin 4 of the USBi connector to power the DSP. Again, ensure that your system consumes <500mA from a USB port. 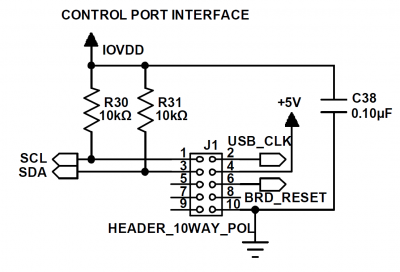 ADAU145x and ADAU146x processors (also referred to as Sigma300 and Sigma350, respectively) expose communications pins as SPI. Since these processors multiplex SPI and I2C interfaces the header can also program the board over I2C (See the “Example Schematic” section for more information).

Note that Pin 4 of the USBi connector illuminates an LED but does not supply power to the entire board. ADAU145x and ADAU146x processors should be powered through the barrel jack. 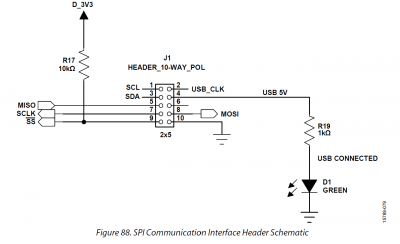 The following schematic based on the Teensy 4.0 microcontroller allows programming of SigmaDSP processors through the USBi programming header and was used for development of the example code. Please click the image to see a full-resolution version. 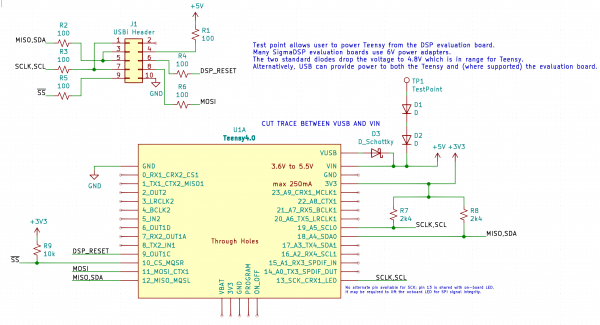 Notice that the SCL and SDA connections are duplicated on the header:

This is because some SigmaDSP development boards connect the I2C interface to the USBi (e.g., ADAU1701), where others connect the SPI interface (e.g., ADAU1466). Connecting I2C to Pin 1 and Pin 3 allows programming of the former; and, including both SPI and I2C connections allows either protocol to be used for the latter.

The same is true for the microcontroller:

This configuration connects the SPI and I2C interfaces of the Teensy to each other. If the unused interface is turned off (tristated) in software, this allows the Teensy to choose which communications protocol to use without changing hardware. This functionality is included in the example program.

Considerations for Self Boot

Microcontroller memory is often in short supply. By configuring the SigmaDSP processor to self boot from an external EEPROM, most of the SigmaDSP program can be excluded from your microcontroller code. However, there are some considerations and common pitfalls to take into account before making this decision:

The example code is separated into the following files:

The example code requires some files exported by SigmaStudio which describe the contents of the SigmaStudio project, including register values and parameter locations.

These files are overwritten each time the “Export System Files” button is pressed in SigmaStudio, so be careful to note any changes in another location.

Most applications do not require these files to be altered.

SigmaStudio also exports the following files which are not used by the example code.