If the suggested vendor for the FMC Riser has no stock available, then a FMC Riser can be procured from Samtec. Create a “My Samtec” account and request a quote for Part Number: REF-228680-01, directly from Samtec.

Board Connections to the ZCU102

Connect the Stingray board to the PMOD connectors on the ZCU102 as described below:

The Interposer board PMOD is pin-compatible with the XUD1A PMOD enabling a direct connect. The 14-Pin PMOD 6 Inch Cable is optional, but recommended as it allows XUD1A to move away from the interposer board for easier RF cabling connections. 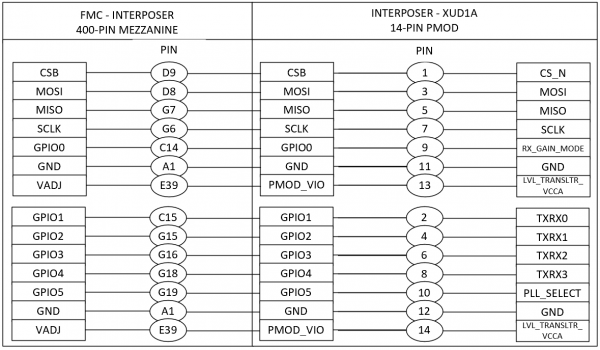 Connect the MxFE evaluation board to the ZCU102's HPC0 port as shown below.

Don't forget to use the use the FMC riser to raise the AD9081 up!

The ADXUD1AEBZ contains IF bandpass filters per channel (FL3, FL6, FL7, FL8). The rejection for these filters is not sufficient for optimized system performance and additional rejection is required to suppress mixing products, LO feedthrough, DAC image, etc.

The XUD1A has 4 RFIO ports whereas the Stingray board has 8 RFIO ports. For this system, the Stingray's 8 channels will be paired using external splitter/combiners (Recommended Splitter/Combiner) to create 4 digital channels which can interface with the XUD1A and MxFE thus created four subarrays where each subarray consists of eight analog channels each. The below tables show how these connections are to be made.

The MxFE Evaluation Platform has provisions for directly driving the sampling clock of the MxFE data converter. An SMP-F plug is available for this purpose, which connects to an AC-coupling capacitor that is not populated by default. Reference the schematic for more information. The table below lists the modifications required for direct clocking.

The default LO configuration for the XUD1A is for an external LO via SMA-F connector. The LO is common across all 4 up/down converter channels via splitter network. Refer to the XUD1A Block Diagram for more details.

The on-board ADF4371 PLL can be used in lieu of an external LO signal. The default ADF4371 reference clock is an on-board 100 MHz VCXO crystal oscillator, but provisions are available to provide an external reference via a SMP-F connector. 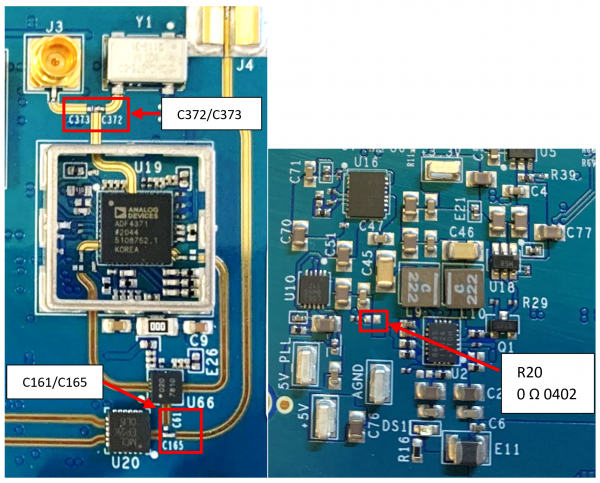 The table below lists the modifications required for the on-board LO.

There are two potential issues that prevent the 1.8V VADJ from powering on the AD9081-FMCA-EBZ board. Upon boot, the FPGA queries the EEPROM of the different boards attached. If a non-compliant EEPROM is detected, the VADJ stays low during boot thus preventing the AD9081 board from powering on. 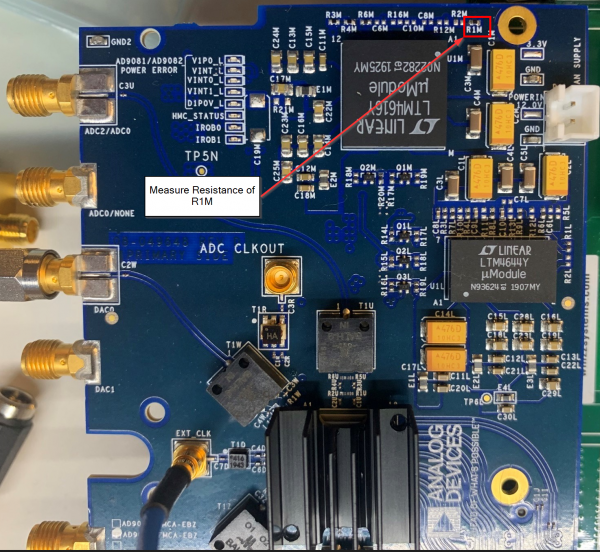 For additional questions or support, please visit the Engineering Zone forum at ADEF.