Multi-Chip Synchronization with the Quad-MxFE + Calibration Board

The Quad-MxFE Platform, in conjunction with the 16 Tx / 16 Rx Calibration Board, has demonstrated multi-chip synchronization (MCS) of the four AD9081s on the system. MCS provides the user with a known, deterministic phase after each power cycle for a given operating frequency. The platform provides MATLAB scripts which can be tweaked for a particular customer application to showcase MCS on their own system. 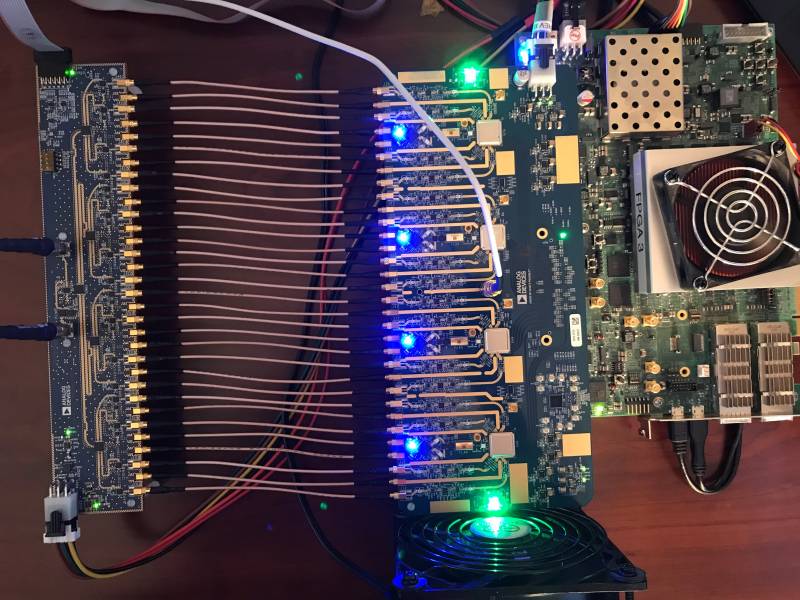 It is helpful to define a few terms prior to a MCS discussion.

The AD9081 contains digital signal processing (DSP) blocks on-silicon to allow for channel-to-channel digital phase and/or amplitude calibration techniques to be implemented as part, or the entirety, of the system level calibration. Some of these phase adjustment knobs occur at the numerically-controlled oscillators (NCOs) residing in the 4x Coarse (Main) Digital Up/Down Converters (DUC/DDCs) and 8x Fine (Channelizer) DUC/DDCs. Additionally, on the Rx side, on-silicon programmable finite impulse response (pFIR) blocks allow for equalization of both phase and amplitude for all Rx channels in the system. Each of these DSP blocks must be synchronized when dealing with multiple MxFE® chips in a system. 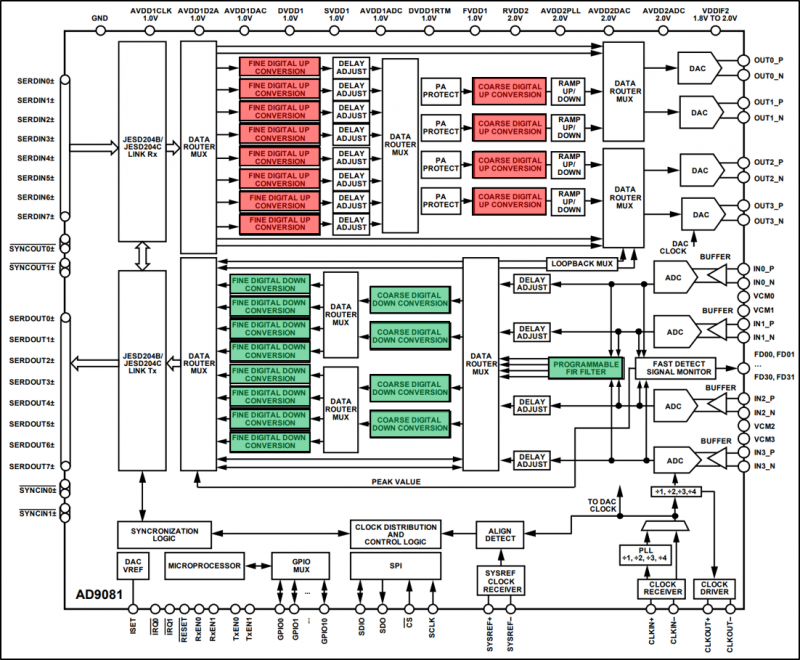 Multi-chip synchronization using the AD9081/AD9082 is achieved with the help of two distinct features within the chipset:

The one-shot sync feature first requires that the user defines the JESD link parameters (such as M, N’, L, etc.) and then configures the synchronization logic for any desired SYSREF averaging (if using continuous SYSREF pulses). Additionally, desired LEMC delays can be used to force the LEMC to be generated at a certain delay after the SYSREF edge. After this is completed, the user then enables the one-shot sync bit within each digitizer IC and then requests that SYSREF pulses be sent to each IC within the same clock cycle, as shown in the figure above. For the Quad-MxFE Platform, analog fine delays have been introduced within the HMC7043 clock buffer IC to allow synchronous SYSREFs to all digitizer ICs. A subsequent check can be executed to verify the one-shot sync process performed successfully by querying registers within each IC which provide information about the phase relationship between the SYSREF signal and the LEMC boundary of each IC’s link. Once a stable phase is measured (ie. once the SYSREF-LEMC phase register reads ‘0’), the user then knows that the LEMCs of all the digitizer ICs are aligned and the user can then proceed to the NCO master-slave sync process. The subtasks described for the one-shot sync are contained within an application programming interface (API) provided for the AD9081.

The NCO master-slave sync feature first assigns one of the AD9081 within the subarray to act as a ‘master’ chip, as shown in the above figure. All other digitizers are then deemed ‘slave’ ICs. The master IC is setup such that the GPIO0 pin of this device is configured as an output and routed to the GPIO0 nets of the three slave digitizer ICs. The slave GPIO0 nets are configured as inputs. The user can then choose to trigger on either the SYSREF pulse, the LEMC rising edge, or the LEMC falling edge. The LEMC rising edge is used as the NCO master-slave sync trigger source as default for the base control code provided with the platform, and the GPIO nets are routed through the HDL instead of locally on the subarray. Next, the DDC synchronization bits are toggled low and then high to arm the ADC-side NCO synchronization algorithm. Likewise, the microprocessor align bit is toggled low and then high to arm the DAC-side NCO synchronization algorithm. When this trigger is requested, at the next LEMC rising edge the master digitizer IC asserts high a ‘master out’ signal through its GPIO0 net. This signal propagates to the GPIO0 inputs of each of the slave devices. At the next LEMC edge, all digitizer ICs experience a NCO reset algorithm. After this any LEMC pulses are ignored with regards to the NCO master-slave sync algorithm. As with the one-shot sync, these NCO master-slave sync subtasks are contained within API functions for user ease-of-use. 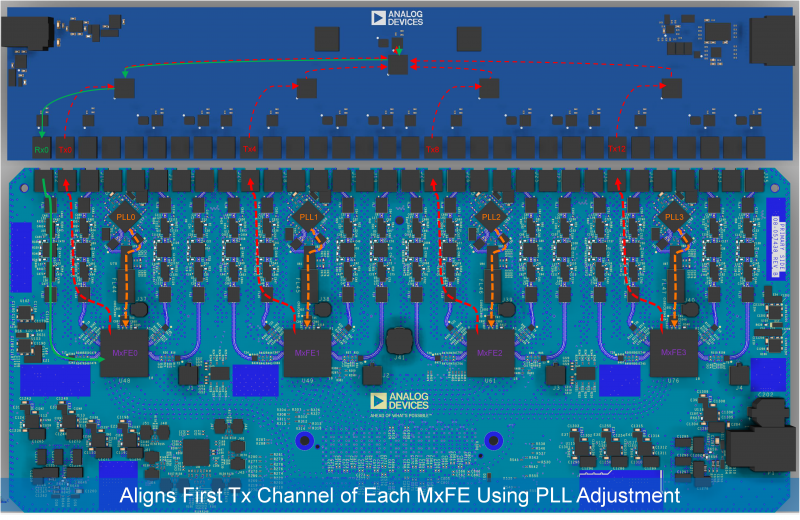 A receiver data capture is obtained which then allows the user to apply cross-correlation techniques to determine the complex phase offsets between these four transmit channels, φTxOffset. The ADF4371 PLL synthesizer ICs contain within them a voltage-controlled oscillator (VCO) which are operating at a frequency fVCO_PLL. The measured phase offsets φTxOffset are then related to the required PLL phase adjustment φPLL_Adj and the RF frequency fcarrier such that:

Using this formula, the ADF4371 PLL synthesizer phases can be adjusted by a new known amount to establish a common Tx baseline between all digitizer ICs for all power cycles, as shown in the figure below. The open circles for each channel shown in the figure correspond to the first power cycle, whereas all the other solid dots correspond to subsequent power cycles. As can be seen from this figure, the calibrated Tx phase offsets for the first (and second) channelizers of all AD9081s are phase aligned. The second channelizer of each digitizer IC is aligned in this instance as well because two channelizers are used for each DAC in the system. 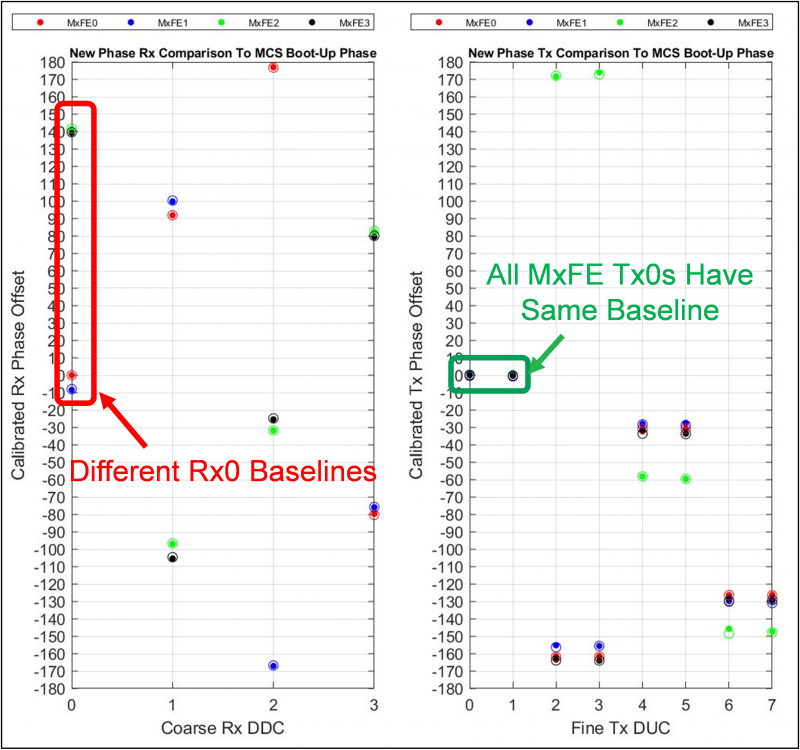 Back To Quad-MxFE Main Page