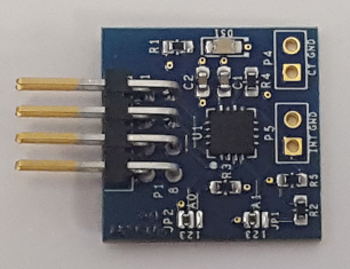 The PMOD board is small in size with dimensions approximately 1 inch in width by 1 inches in length. There are a few options on the hardware I'd like to point out for you, in order to use the board.

When using the ADT7420 PMOD board, the 3.3V power for the PMOD comes directly from the host board it is connected to. The power from the host is generally capable of providing up to 100 mA at 3.3V, but for complete PMOD power specifications please click here.

The fastest way to tell if the EVAL-ADT7420-PMDZ board is powered is by seeing if the LED on board is illuminated. The LED can be found here on the board. 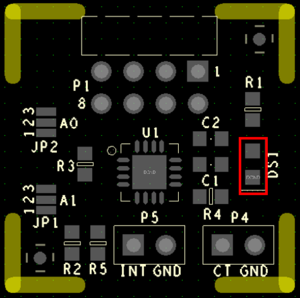 The specific interface used for the EVAL-ADT7420-PMDZ boards is the extended I2C. In general ADI has adopted the extended I2C connector for all PMOD devices which have an I2C interface. It provides flexibility to add/daisy chain multiple I2C devices onto the same bus.

The EVAL-ADT7420-PMDZ has some optional modes of operation to increase flexibility when using multiple EVAL-ADT7420-PMDZ boards in a single system and to help alert the Over/under/critical temperature readings. Each configuration is explained below.

The ADT7420 can have up to 4 unique I2C device addresses, depending on the logic level of pins A1 and A0. The default configuration for the EVAL-ADT7420-PMDZ is for A1 and A0 to be tied low, so the default I2C address is 0x48. 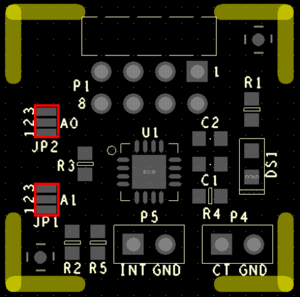 If you decide to change the I2C address, then you will need to switch the position of the JP1 and JP2 solder links using the following table.

The ADT7420 has the capability of monitoring temperature and alerting users of Over/Under temperature conditions, as well as Critical temperature events. Access to these pins and functions are provided via the INT and CT connections on the board. 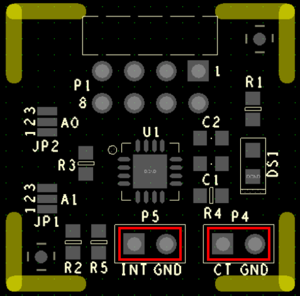 The temperatures are software configurable, and all you need to do is monitor the INT(for Over/Under temp conditions) or CT(for Critical temp events) with respect to GND.