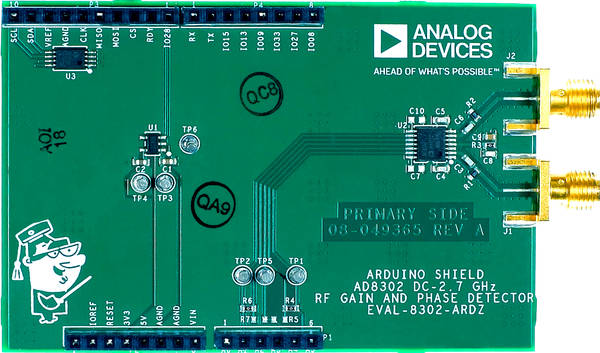 The EVAL-AD8302-ARDZ shield illustrates the functionality of the AD8302, a gain and phase detector which operates for frequencies up to 2.7 GHz. The voltage outputs of the AD8302 are routed to the ANALOG IN connector of the Arduino base board. This allows the RF power detector’s output voltage to be easily digitized and processed by the Arduino base board’s integrated six-channel ADC.

The power supply for the board comes from the Arduino base board through the POWER connector (5V). So there is no need to connect an external power supply.

The EVAL-AD8302-ARDZ is designed to work as a shield for EVAL-ADICUP3029 and DC2026C(also called Linduino One). For EVAL-ADICUP3029, PC software GUI and device development drivers are available. 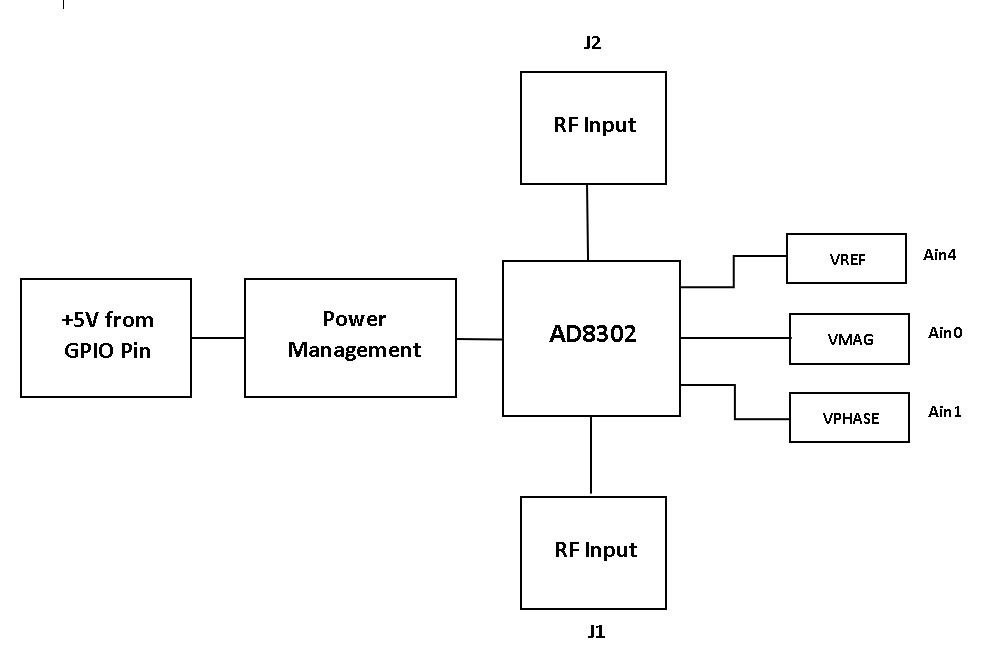 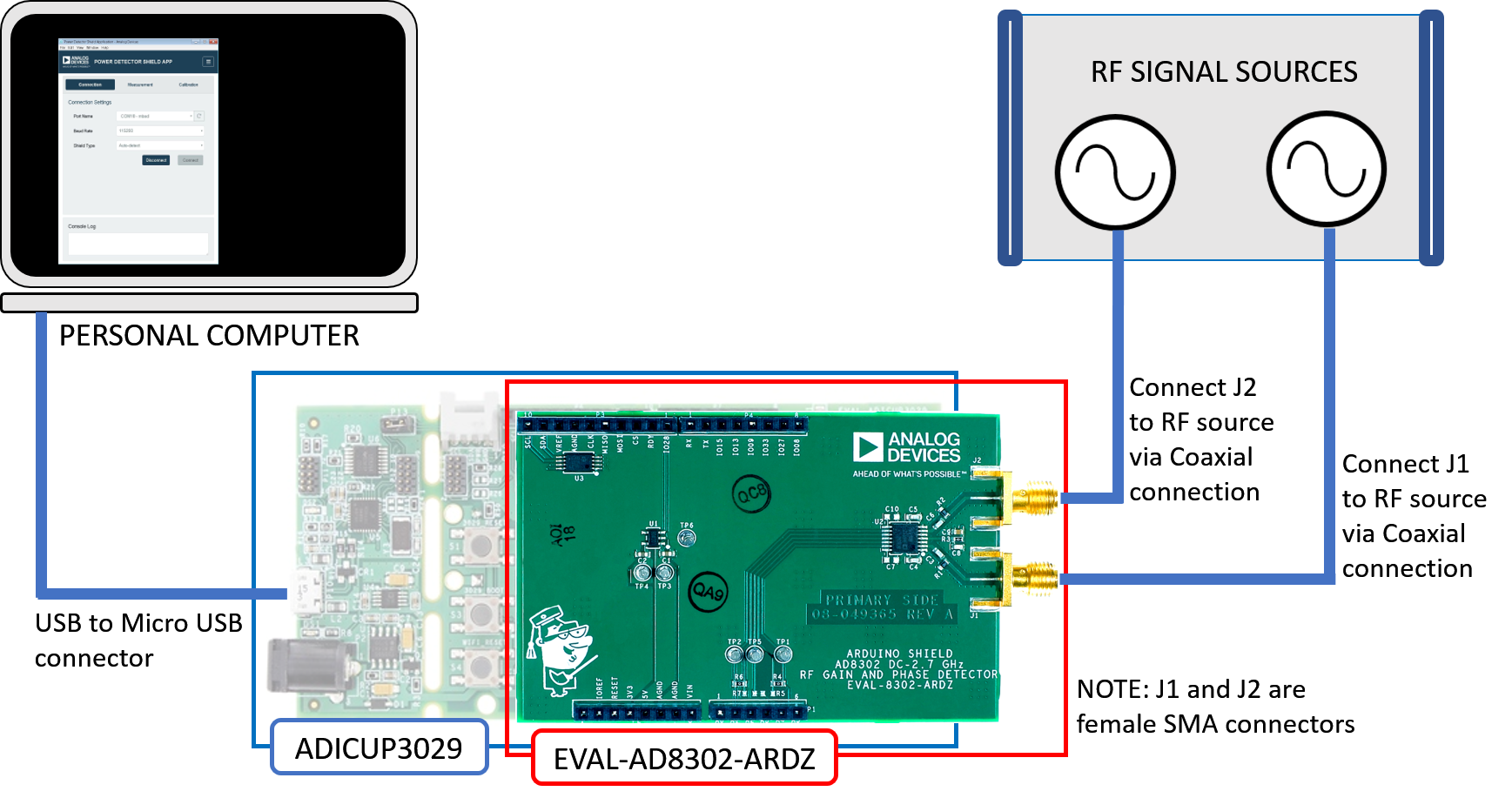 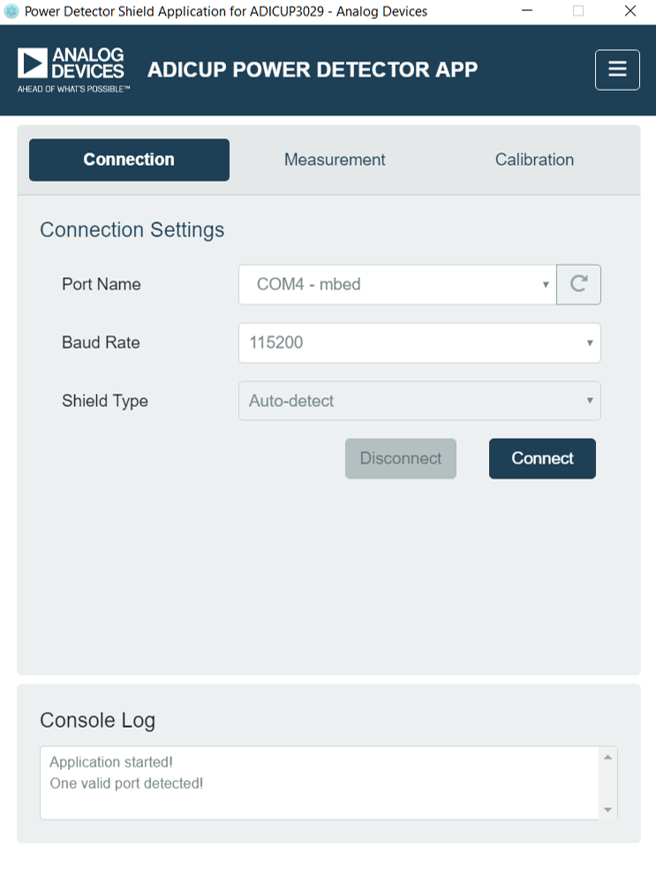 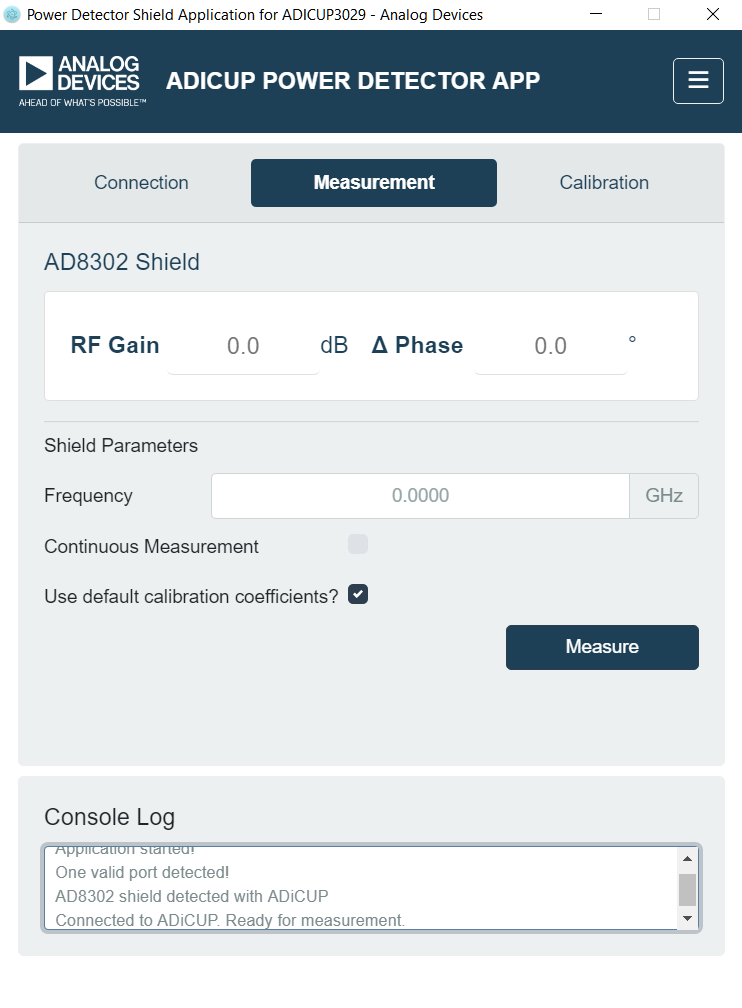 Not entering the correct frequency may result to less accurate measurements.

Not entering the correct frequency may result to less accurate measurements.

Click Connection or Calibration to switch to respective window. 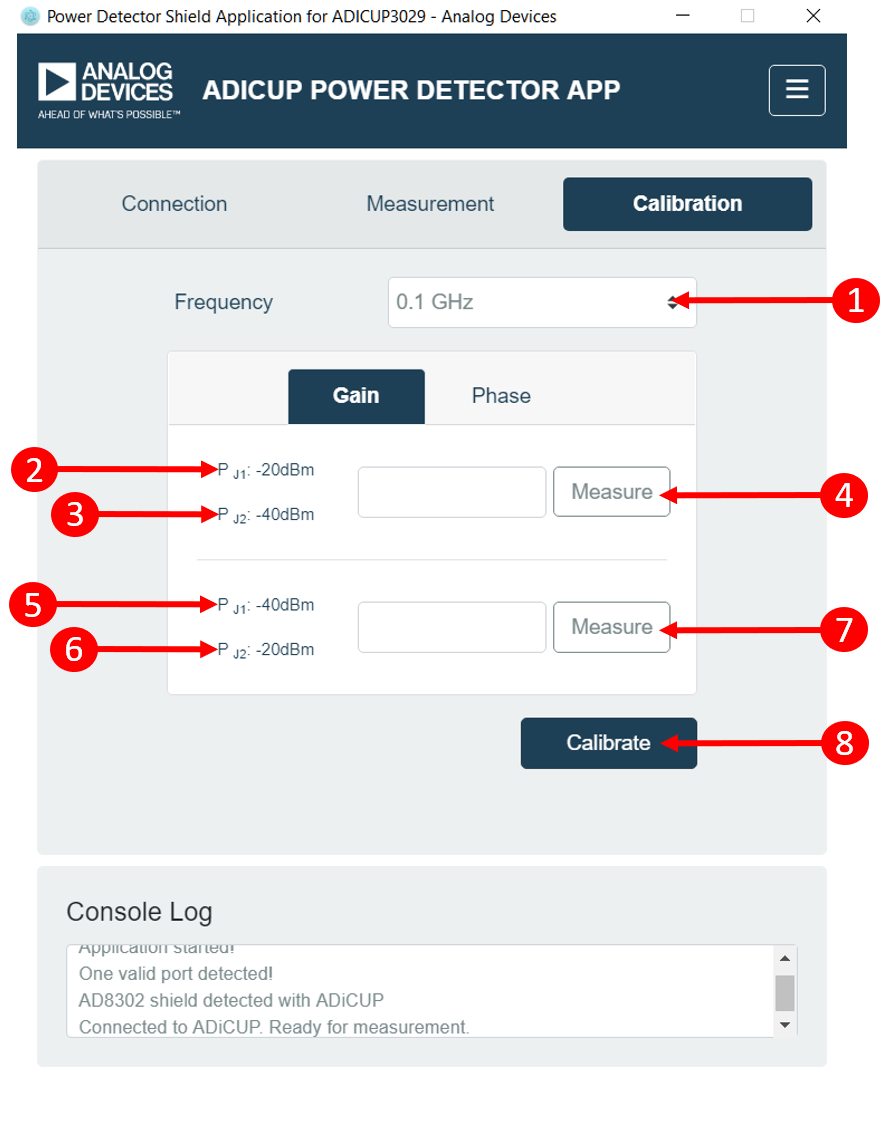 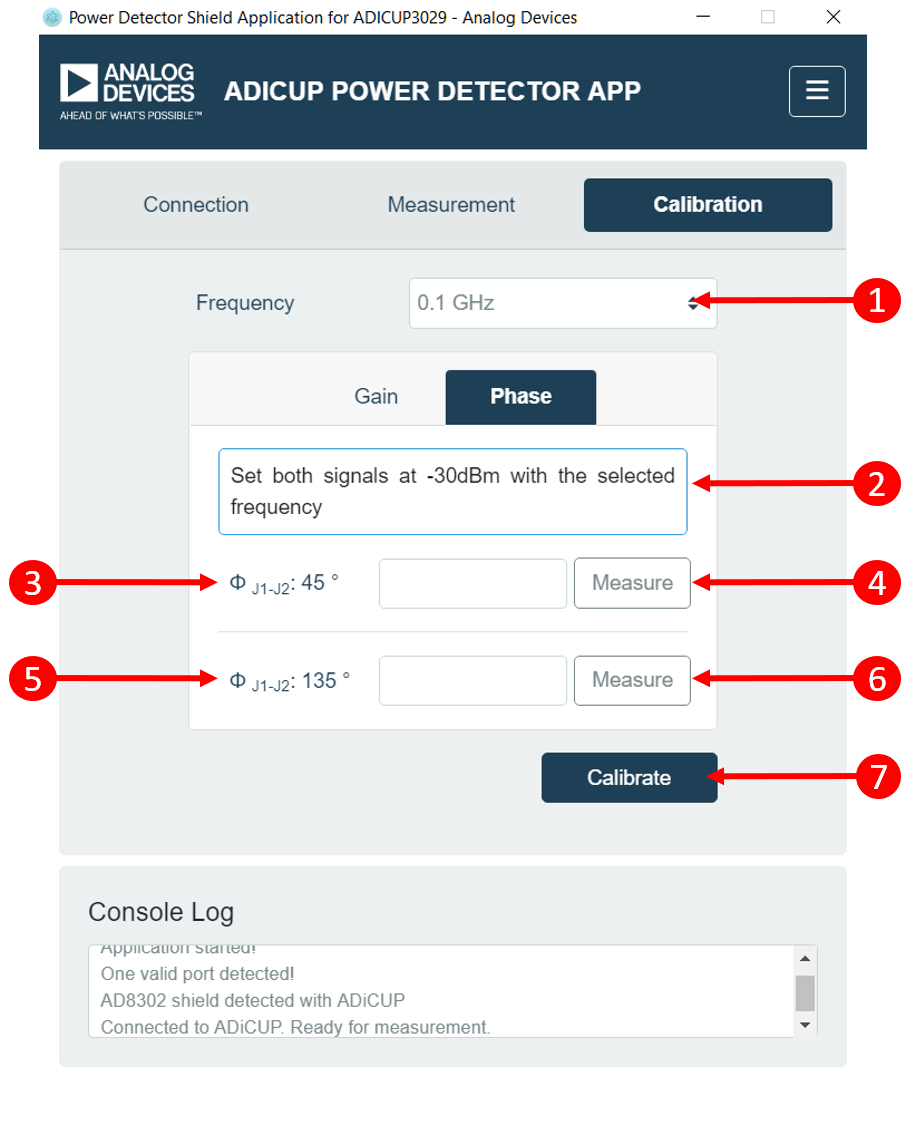 User must be able to synchronize the phase of input signals perhaps, by using external devices/equipment, to do this calibration

Calibration can be implemented using 2, 3, or 4-point calibration techniques which can be used to approximate nearly linear response characteristics such as in AD8302. A typical characteristic of the AD8302 for magnitude difference of 1.9GHz input signals is shown in Figure 1. This is TPC4 from the AD8302 datasheet. 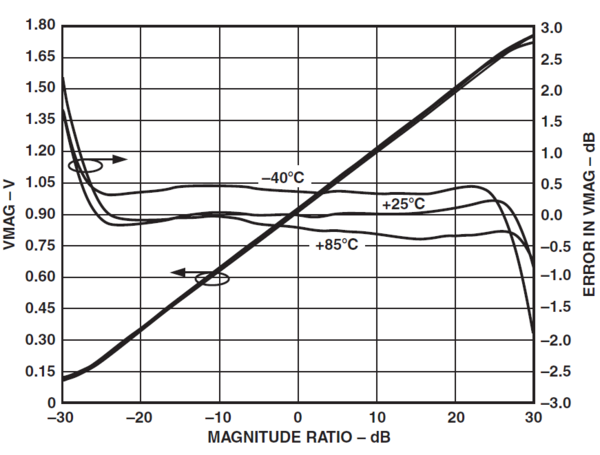 Two-point calibration is the simplest calibration technique. This models the magnitude transfer function of the AD8302 and ADC as a single straight line

MAG is the RF Power Magnitude being measured

CODE is the ADC code

If there is some non-linearity in the transfer function of the RF detector, the number of calibration points can be increased to improve measurement accuracy. To implement three-point calibration, three known power levels are applied MAG1, MAG2 and MAG3 (MAG1 should be greater than MAG2 which should be greater than MAG3) and the corresponding ADC codes are noted (CODE1, CODE2, CODE3)

After calibration when measuring RF input power, the power is calculated using the appropriate equation

To decide which equation and calibration coefficients to use, the CODE from the ADC should be compared to CODE2 (CODE2 is the demarcation point between the two calibration regions). This will indicate which region of the AD8302's transfer function the RF power magnitude is located. For example, if the ADC CODE is greater than CODE2, this will indicate that the input power is greater than MAG2. So SLOPE1 and INTERCEPT1 should be used to calculate the input power. Because of the need to identify the region in which the measured RF input power is located, the CODE2 value should also be stored after calibration along with the SLOPE1, SLOPE2, INTERCEPT1 AND INTERCEPT2.

This technique can be extended to four or more calibration points. This may improve measurement accuracy at the cost of more complex calibration.

Development packages are available for C and Python. Other development environments may be used but this development guided is focused on software development on CrossCore Embedded Studio (for C) and on Pycharm(for Python).

Assumes a fresh installation of all required software 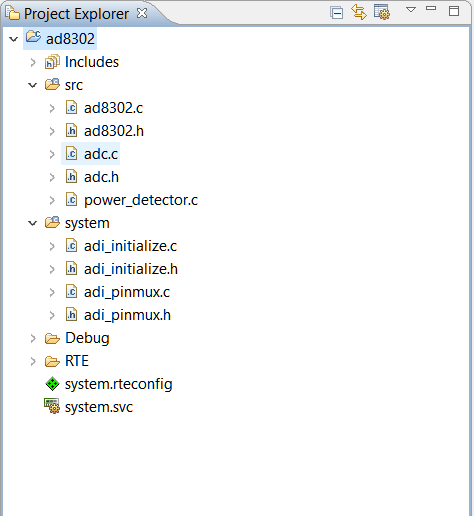 Assumes a fresh installation of all required software

Bill of Materials of EVAL-AD8302-ARDZ

Archive of .art files of EVAL-AD8302-ARDZ

For any queries regarding the hardware and evaluation software, contact as at EngineerZone.