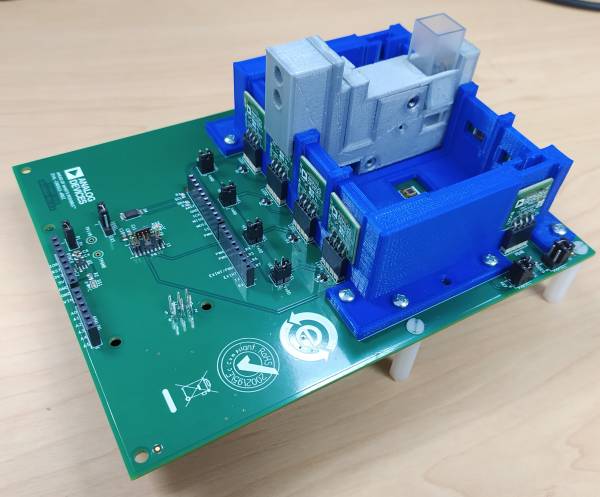 Here are the list of items and their photos included in CN0503.

The CN0503 supports 4 channels or paths of light which can be configured for different types of optical measurements. The 2 channels at the sides are capable of measuring light intensity reflected at 90 degrees from the liquid sample to support measurements for turbidity, fluorescence, etc. The LED boards placed in each of the 4 channels are interchangeable and natively support 8 different wavelengths. Additional spare boards are available to accommodate LEDs with other wavelengths. 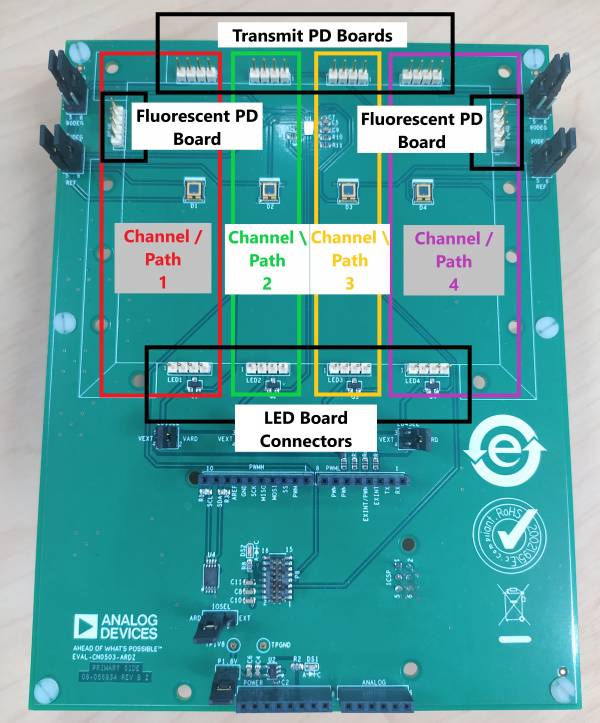 CN0503 uses 3D printed mechanical fixtures to enable four directed light paths to the liquid sample held in a Cuvette. The mechanical fixtures can be classified into two separate objects: the Mounted Base and the Tower. The Mounted Base is capable of holding four Towers which are freely interchangeable, as well as two Fluorescent Filters. The Tower holds the Cuvette, which contains the liquid sample, and optical glass items: a Condenser Lens, a Neutral Density Filter, a Narrowband Transmit Filter, and a Beamsplitter. Below are two videos showing the assembly of the base and tower, respectively.

A Mounted Base fits on top of the Main Board by following the outlined position in the silkscreen. At its bottom, attach 4 M1 magnets to the provisions as shown below. 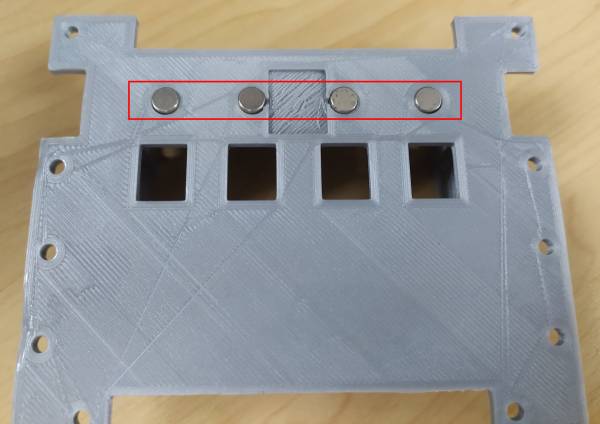 The Mounted Base will fit snugly between the LED and PD connectors. 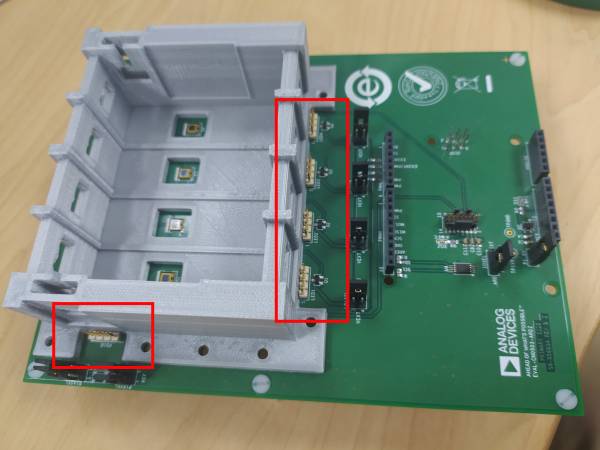 Secure the Mounted Base to the Main Board using 10 S2 Screws and 10 Hex Nuts at the holes at its sides as shown below. 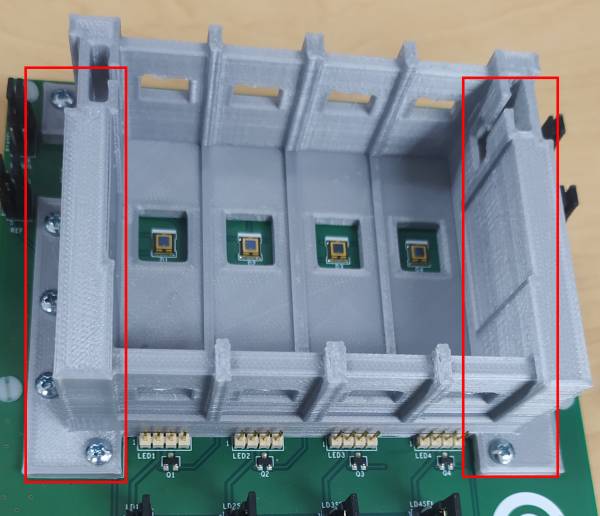 The LED Boards are drawn with a huge 'X' on the silkscreen which marks the center of the area of interest or the active area of the LED. To mount the LED Boards, face the top of the board with the LED facing towards the small window of the Mounted Base and attach the 4-pin female connectors to the jumper headers marked LED as shown below. 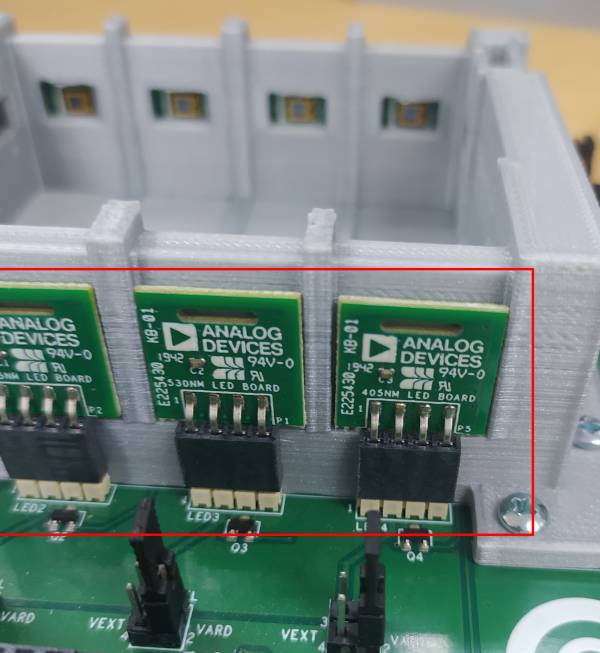 To mount the photodiode (PD) boards, face the top of the board with the photodiode facing towards the small window of the base and attach the 4-pin female connectors to the jumper headers marked PD as shown below. 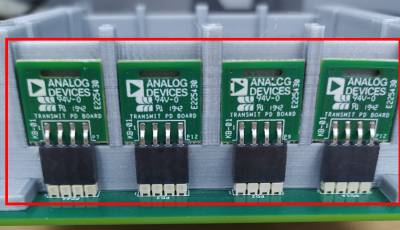 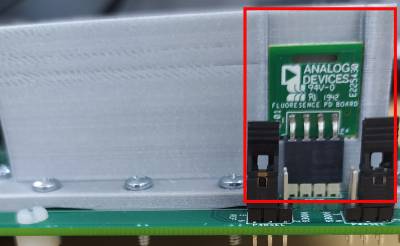 The two Fluorescent PD Boards should be placed at opposite sides of the base. The exact centering of the photodiode is not crucial

To replace or remove the PD and LED boards, pull the the notch in each board using a flat screw driver or fingernail to lift it up from the jumper headers 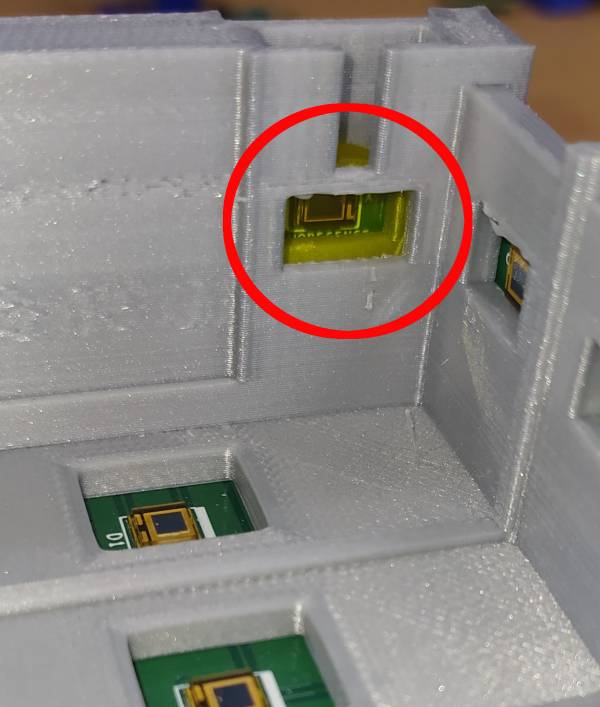 The tower holds the optical glass items and the cuvette which holds the liquid sample. This section details how each of these items are assembled into position to form the light path and also, the 3D printed mechanical fixtures which hold them in place (Cuvette Holder, Cuvette Holder Cover, Beamsplitter Cover, and Lens Cover).

Following the proper order of steps to assemble the tower makes it easier to do as well as prioritizes the important optical glass pieces.

Check for slight movements of Beamsplitter by listening for clicking sounds when you shake the Cuvette Holder.

The Condenser Lens is used to focus and direct the light from the LED to through the tower and form the light path. Thus, it is important that the Condenser Lens be positioned properly and tightly secured so that no slight movements occur.

Check for slight movements of the lens by listening for clicking sounds when you shake the Cuvette Holder.

This step is typically not required, because the EVAL-CN0503-ARDZ kit does not contain these components. Both the Narrowband Transmit Filter and Neutral Density Filter are optional items which can be added to the optical path if your application requires it.

The Cuvette can easily be added to the Cuvette Holder as shown below. 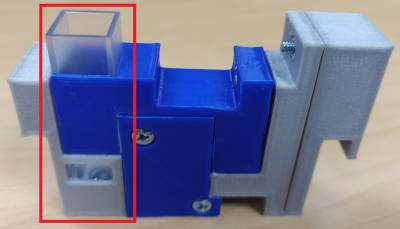 (Optional) The Cuvette Holder is a tight fit for 10mm by 10mm Cuvette. When using a smaller-sized cuvette, a provisional screw hole can be used to press against the Cuvette and secure it.

Mounting the Tower to the Base

The Mounted Base accommodates up to a maximum of 4 Towers. Towers are interchangeable and can be placed in any of the 4 positions. To attach the Tower to the Mounted Base, it should hang from the top of the walls of the base as shown below. Slight pressure may be needed to fully push the Tower down. 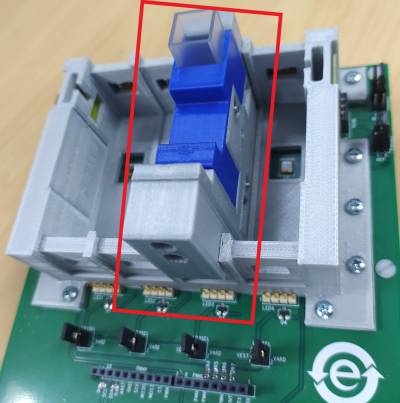 The CN0503 has ten jumper positions which configure different settings as shown below. Also, the default shunt positions are highlighted. 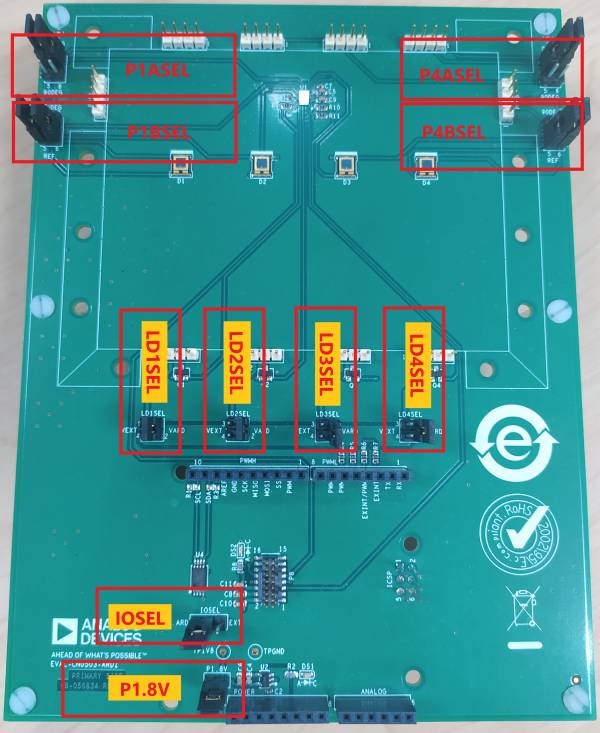 P1.8V enables the 1.8V LDO supply which sources its input voltage from the Arduino 3.3V pin. By default, a shunt is placed in P1.8V.

IOSEL selects the source of the logic level voltage for the ADPD4101. By default, a shunt is placed connecting pins 1 and 2.

There are 4 jumper selection headers to set the supply source of each of the four LED connections. Each follow the same selection rules for shunt placement. By default, a shunt is placed connecting pins 1 and 2 for all 4 jumper headers.


Each LED is connected to a transistor which protects the LED drivers of the ADPD4101 from overvoltage.

The CN0503 is stacks on top of the EVAL-ADICUP3029 or any Arduino microcontroller using the PWMH, PWML, POWER, and ANALOG headers. You will also have to remove the stand-offs from the CN0503 as shown below. 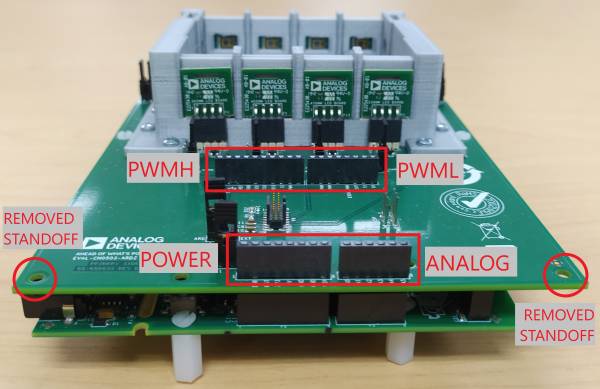 This section details the hardware setup of CN0503 for a demonstration showing 4 different experiments in each optical path, utilizing colorimetry (absorbance measurement), turbidity, and fluorescence measurement. Below is a general block diagram of the setup.


Listed in the table below are the LED Boards and optional optical glass components used in each path.


The jumper configuration of the CN0503 for this setup is shown below.

In optical path 1, the experiment shows the detection of quinine in tonic water using fluorescence measurements. Optionally, you can also use samples of soda water and de-ionized water for comparison.

In optical path 2, the experiment shows pH measurement by using colorimetry to detect changes the solution through the bromothymol blue indicator. As pH changes from an acidic level to a neutral and basic level, bromothymol blue changes color from yellow to blue. A yellow colored solution will block 430nm light while a blue colored solution will allow it to pass. The change in pH can be done using a simple aquarium kit.

In optical path 3, the experiment shows nitrate detection using colorimetry. Using the API reagent found in nitrate test kits, a solution with a higher concentration of nitrate turns into a darker shade of red. As a result, the degree of absorbance of 615nm light decreases with the increasing nitrate concentration.

In optical path 4, the experiment shows turbidity measurements of cloudy water made by adding a a drop of milk and de-ionized water using 530nm light.

ADI has ordered additional assembled Cuvette Holders from Shapeways and received high quality prints back, although there are certainly other vendors capable of printing these files. ADI is not responsible for any printing mishaps or issues with the printing vendors, we are merely providing our feedback.