The AD-FRQCVT1 extends the frequency of operation for the AD-FMCOMMS3/4. Two on-board programmable Phase-locked Loops frequency synthesizers (ADF4351) generate the needed Local Oscillator signals used by the up- and down-converting mixers. Input signals in the frequency range of 1-100 MHz is up-converted to an output signal centered around 340 MHz (RX SAW BPF) to the AD-FMCOMMS board. A output signal in the range of 1 to 100 MHz is generated by down-converting a 370 MHz (TX SAW BPF) signal from the AD-FMCOMMS board.

The Analog Devices board support packages for the FMCOMMS3/4 design, on the various supported FPGA carriers, include an additional SPI interface routed to the PMOD board header. 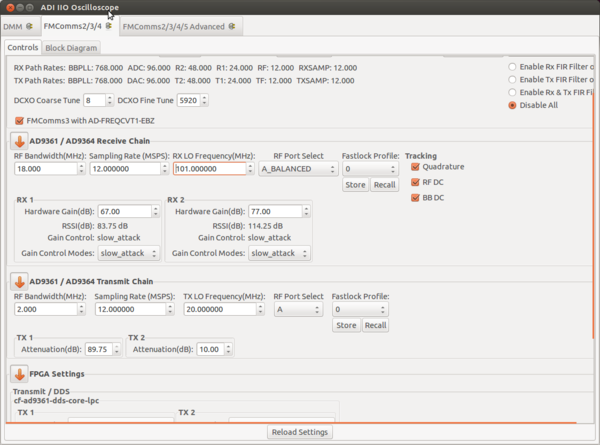 Two environmental variables allow the user to control the sign in the mixing equation as well as the window size (span) where the signal is centred around the SAW band pass filter center frequency.