Applications such as wireless base stations (BTS) require that the reference clock lock to a system master clock. In these situations, it's recommended to use a stable external oscillator such as a VCTCXO1) in conjunction with a synchronizing PLL such as the AD9548, which can be sync'ed to a 1 PPS2) output from a GPS chipset. This will give you the most stable time base possible, and meet the requirements of base stations.

Wireless user equipment (UE), however, dos not typically need to be locked to a master clock but they do need to adjust the LO frequency periodically to maintain connection with a base station. The BTS typically occasionally informs the UE of its frequency error relative to the BTS. This will help account for any sorts of frequency error, including temperature, or stability issues of low cost crystals and Doppler shift due to movement between the UE and the BTS.

To solve the UE problem with crystals, the AD936x includes an digitally controlled adjustable a trimming capacitor inside the crystal oscillator tank circuit on the XTALP pin. The baseband processor can adjust the reference clock frequency by adjusting this capacitor. This combination of external crystal (XO) and trimming capacitor is collectively referred to as the digitally controlled external crystal (DCXO).

To solve the UE problem with oscillators, (which drive into XTALN single ended, and are not effected by external capacitance), the above tuning solution will not work. The only solution for this is to read the actual oscillator frequency, and tell the system that actual frequency.

When discussing parts per million (or ppm) stability issues - the size of the actual impact is sometimes is lost.

The 40MHz crystal on the FMCOMMS2/3/4 is an Epson special for Analog Devices (it's a TSX-3225, with reduced jitter, which in this applications is more important than absolute accuracy datasheet). It has a spec of initial frequency tolerance of ±10.0 ppm, frequency stability (temp co) of ±15.0 ppm max, and an aging spec of ±2.0 ppm. This works out to an RMS average (including aging) of ±18.1 ppm. (we do an RMS, since it's statistically unlikely that all deviations would be the max at the same time).

Luckily, most receive algorithms include some sort of coarse and fine frequency correction to fix the LO, but they need to understand that:

Crystals are available in different precisions, ±10 ppm less, you'll pay more. It's always a tradeoff between jitter, precision, power and price. For the FMCOMMS2/3/4 solutions, ADI decided to sacrifice precision for price - to demonstrate that the AD9361 can be used with a low cost crystal solution. Because of this the FMCOMMS2/3/4 boards are not meant to be used for BTS type applications, where absolute actual frequency is required.

This section describes the setup, operation, and recommended specification of the DCXO3) and reference clock used on the FMCOMMS2/3/4 and ARRADIO platforms. This technique can not be used on FMCOMMS5 or PicoZed SDR, which uses a single ended oscillator, not a crystal.

By adjusting a capacitor within the AD9361, the resulting DCXO frequency can be adjusted to compensate for XO frequency tolerance and stability. The resolution of the DCXO varies with coarse word with a worst-case resolution (at coarse word = 0) of 0.0125 ppm. Using both coarse and fine words, the DCXO can vary the frequency over a ±60 ppm range.

To tune the AD9361, you need to determine how you want to tune things:

and you need to decide what you want to tune:

The decision of what/how can come down to, what equipment do I have in the lab, or production test station, and how much time it takes, and is the software written to take advantage of things.

The suggested/preferred way to tune things today is automatically, measuring the buffered crystal output. To measure the frequency, we have used either Hameg HM8123 or the Agilent 53131A frequency counters, and the SCPI code inside the osc application supports this.

Other methods will be described as well.

To observer the internal clocks, or crystal, this is controlled by the CLOCKOUT settings of the Advanced tab of the IIO oscilloscope. 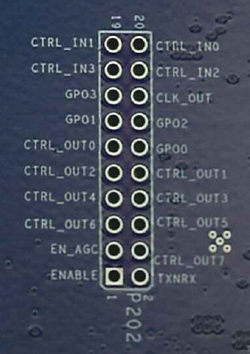 This will control the CLK_OUT pin on the AD9361, which can be found on the P202 pin header of the FMCOMMS2/3/4 boards. Other boards may vary. It is necessary to be able to observing this output with a frequency counter, or something that will tell you the frequency to do the tuning.

To observe the RF output, look at the output (Duh). You will need to make sure to look at both the RF carrier and any signal (the DDS) that is on the output.

There is no automated process to do this, since this isn't going to be very accurate, and is not recommended, but it is possible to use an oscilloscope to measure the frequency of the CLOCKOUT pin, or a spectrum analyzer of the RF output.

It's just a matter of manually changing the DCXO coarse and fine tuning until you get the result you want, and then clicking “Save to EEPROM”.

With the latest version of IIO Oscilloscope it's possible to run an automated tuning process via a SCPI-connected device (currently either the HM8123 or 53131A listed above).

This support is provided in the FMComms2/3/4 plugin as seen below. 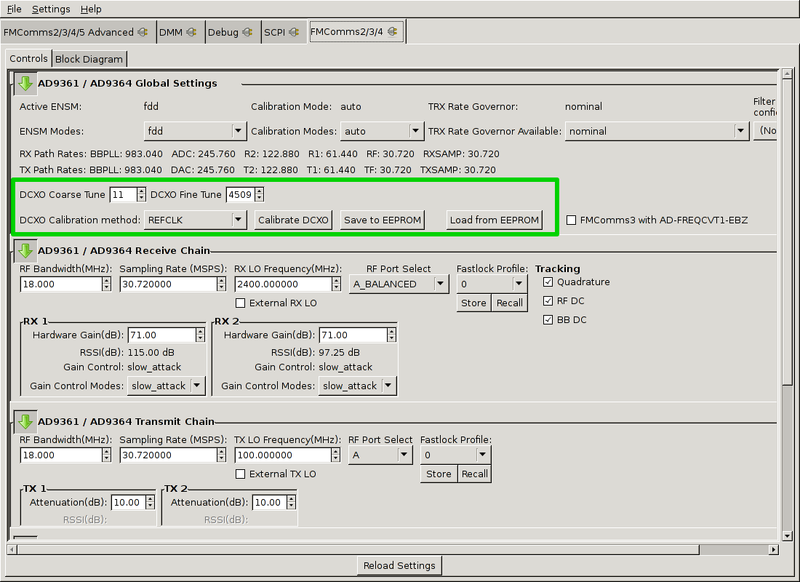 Currently only two calibration methods are supported, REFCLK and RF Output. In order to use the REFCLK option the signal from the CLK_OUT pin described above must be used as input for one of the supported counters.

Using the RF Output method requires connecting TX1 from the FMComms card to the input of a counter.

Note that the method providing the most accurate end result should be REFCLK.

2. Force the SCPI plugin to be loaded before running osc as root by launching a terminal and running the following:

3. Select from the calibration methods described previously and hit the 'Calibrate DCXO' button on osc.

A calibration progress bar should appear as seen below if everything is properly connected and the process is proceeding. If not an error message should pop up, noting what probably went wrong. Usually errors come from using the mismatched a calibration method with input to the counter device or SCPI connection issues. In addition, note that a calibration in progress can be cancelled by hitting the 'Stop calibration' button also seen in the image below. 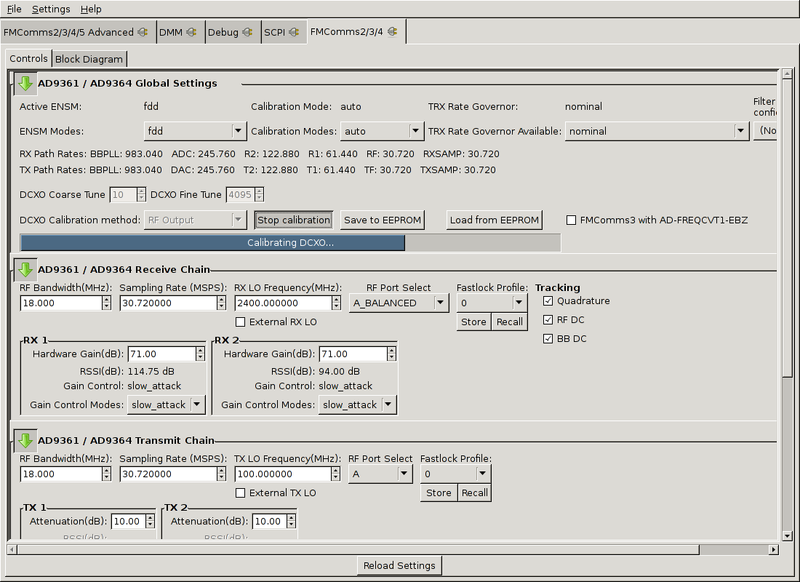 A future planned extension to this work is calibrating against an RF Input source in which an antenna would be attached and the user would select a known frequency being used for a local broadcast or similar (e.g. an FM radio station) that would then be tuned against.

This technique can be used on FMCOMMS5, PicoZed SDR, or the Pluto SDR, which uses a single ended oscillator, not a crystal.

This is normally done by two methods:

The issue with measuring a known RF signal is that both the sample rate (FS) and local oscillator (FLO) are effected by the oscillator offset.

Its easier to understand things by working through an example. If we simplify the concept of the AD9361 clock tree, VCOs and PLLs; we can assume that it is just a simple multiply between the oscillator frequency (FOSC) and both the Rx local oscillator (FLO) and ADC sample rate (FS). 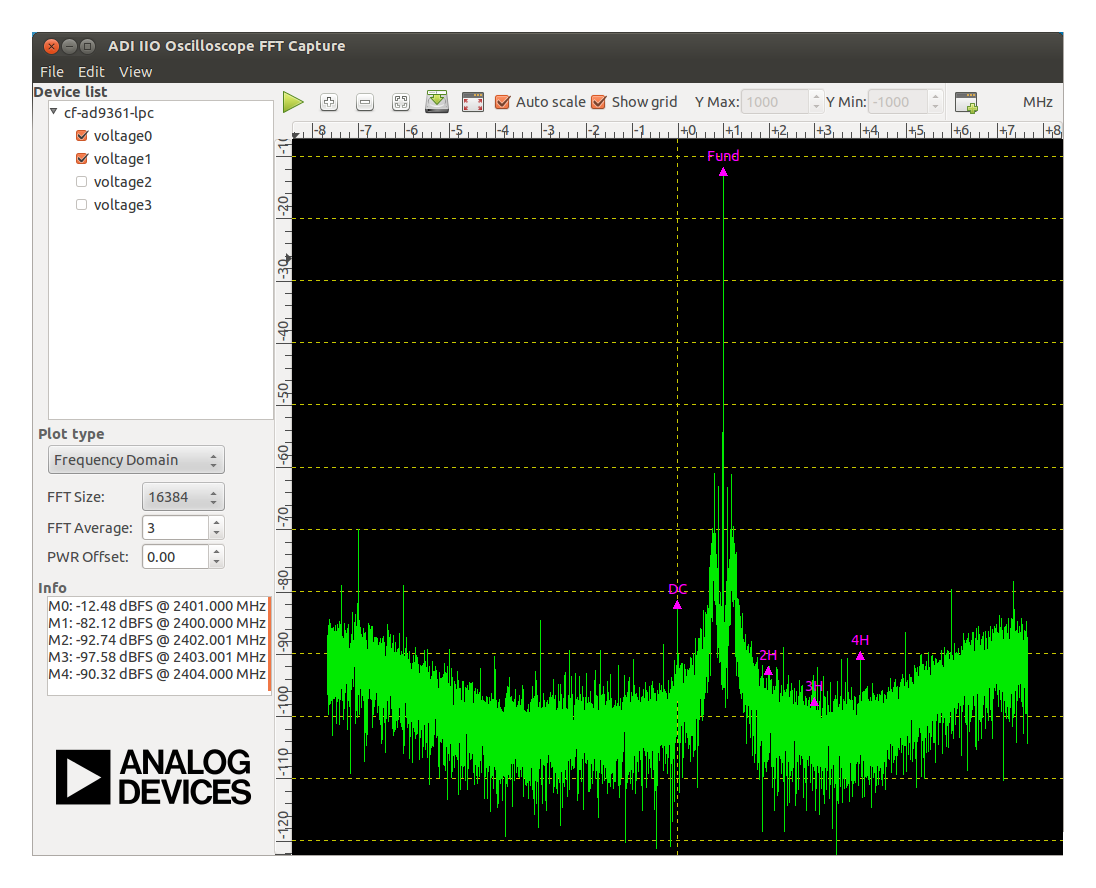 However, if we have a (for example +10ppm offset), the numbers work out to something like:

Working backwards is possible. If you trust the external signal more than the internal oscillator (FOSC), you should use this method.

since everything is a known, but PPM, it can be solved by simple substitution. You can also see from that that lots of bins are good, and things that are away from the LO (have a large bin number) will provide more detail to work on. The actual frequency shouldn't really matter than much, and tuning things at 500MHz, should be similar to tuning things at an LO of 3500 MHz.

In this example, we :

The more accurate the bin number, the more accurate the ppm offset result will be. You may think a bin number of 2210.166486 is contrived - however, it is very easy to actually measure that using Quadratic Interpolation of Spectral Peaks to find the actual peak and where it is expected to be in the fractional part of the bin. The three closest peaks fit a parabola (which is a good approximation for narrow CW Tones which have had their energy spread into adjacent bins by a FFT window function), and the actual peak is found.

This specifies any shell prompt running on the target

To make this easier for ADALM-PLUTO users, the cal_ad9361 application was created, which is found on your PlutoSDR. All you need to do is find a strong tone (like an ATSC pilot tone), and use that to tune the radio.

This specifies any shell prompt running on the PlutoSDR

In the above examples, if you do not account for ADC sample rate offset, you will never be able to get an exact reading. but it might be close enough. For example, if we take the previous example:

In this example, we :

In most practical examples, it would be fine to ignore this when the sampling rate to RF LO frequency is high (in this case 2400:7.68 or 312.5:1). When LOs are low, and sample rates increase, it creates a larger impact, and can't be ignored.