Light Emitting Diodes (LEDs) are high efficiency lights commonly used in indicators and for illumination. In this Activity you will learn how to manually toggle four LEDs on and off when you click on a control button and then modify the program to program to display a binary number.

The digital I/O channel pins are referred to as D0 through D3. These correspond to the pins labeled PIO 0 - PIO 3 on the ALM1000 board silkscreen.

The Python software development layer (libsmu and pysmu) for the ADALM1000 provides a way to write specific control routines for external hardware. Be sure to install the libsmu and Python bindings, if you have not done so already, before continuing with this activity.

The first thing to do is connect / initialize to the ADALM1000 by doing the following commands:

This sets up a “session” to communicate with the hardware. This will find and use the first board found. This simple approach works well when only one board is connected to the computer.

Now through Python we can set as outputs and control any or all of the general purpose digital pins on the ALM1000.

On your solder-less breadboard connect the four digital I/O pins from the ADALM1000 digital connector to drive four LEDs as shown in figure 1.

Open the toggle_led.py Python program in your favorite editor (from this archive toggle-leds.zip). The IDLE that comes with Python is handy because you can run the program directly from there. Scroll down to the sel() function. You will see a series of if statements that set a pin high or low depending on how the buttons are set in the window. The sel() function is called whenever a button is pushed. Run the program, and you should see something like this. 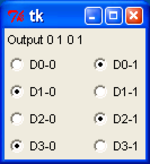 Push some of the buttons to toggle on and off the LEDs.

Close the previous program and now open toggle_led_alt.py in the editor. Scroll down to the sel() function. In this example we use an alternate approach where we use the value, either 1 or 0, of the button variables to set a pin by adding it to 0x50 and sending that through the devx.ctrl_transfer() function.

Modify the program to display the binary representation of a user specified number from 0 to 15.