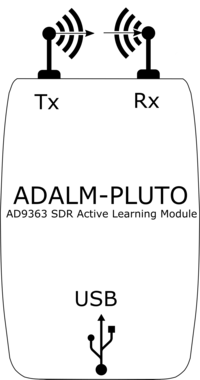 The basic block diagram of the ADALM-PLUTO is pretty easy to understand. It has two antennas, where the analog Radio Frequency (RF) energy goes in/out, and a single USB connector, where digital data also goes in/out to a host system. However, there is more going on that just RF to bits.

For nearly the last hundred years, radio design and architecture hasn't changed that much. While many designers and engineers have made vast improvements in devices (from tubes to transistors to integrated circuits), and implementations (shielding, noise reduction, etc.), the fundamental architecture that radio engineers work with is historic 2).

The radio inside the ADALM-PLUTO is the AD9363, a high performance, highly integrated RF agile transceiver, based on a direct conversion receiver. 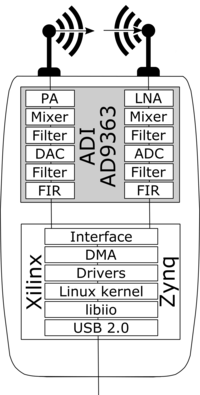 1)
surprisingly, Hertz considered these results as being of little practical value
2)
according to the National Register of Historic Places a building should be fifty years old to be historic, so I think this is an acceptable adjective for technological invention
university/tools/pluto/users/understanding.txt · Last modified: 14 Jan 2021 05:38 by Robin Getz