The antennas connectors on the ADALM-PLUTO are standard polarity SubMiniature version A (SMA) connectors. There are many ways to characterize an antenna, from gain (or loss), radiation pattern, beamwidth, polarization, and impedance.

The actual antennas included with the ADALM-PLUTO are Jinchang Electron JCG401. While the JCG401 is specified for 824-894 and 1710-2170MHz, they do operate over a much wider range, but it should be understood that all antennas are filters. They will have some frequency selectivity (however, they are not brick wall filters). Just because something is specified for 824 MHz, does not mean that it will not pick up something at 600MHz, or even 87MHz, or it might not.

The JCG401 datasheet does spec radiation pattern, beamwidth, polarization, and impedance, but leaves out performance (gain or loss) over frequency - since it is spec'ed for 824-894 and 1710-2170MHz. We can quickly do that ourselves with the help of a E5071C ENA Series Network Analyzer. We connect the two antennas to the two ports, calibrate with a wire, and then run a S21 test.

Running an S21 test on the E5071C will broadcast a tone from one antenna (on port 2), and receive it on the other (port 1), and plot the results (in dB) compared to a wire that was used during the calibration on the instrument. It's interesting note that we are measuring both Rx and Tx capabilities. It is possible that the Rx at sub 600MHz could be fine, and it is just a Tx problem (unlikely, but I just wanted to point it out). 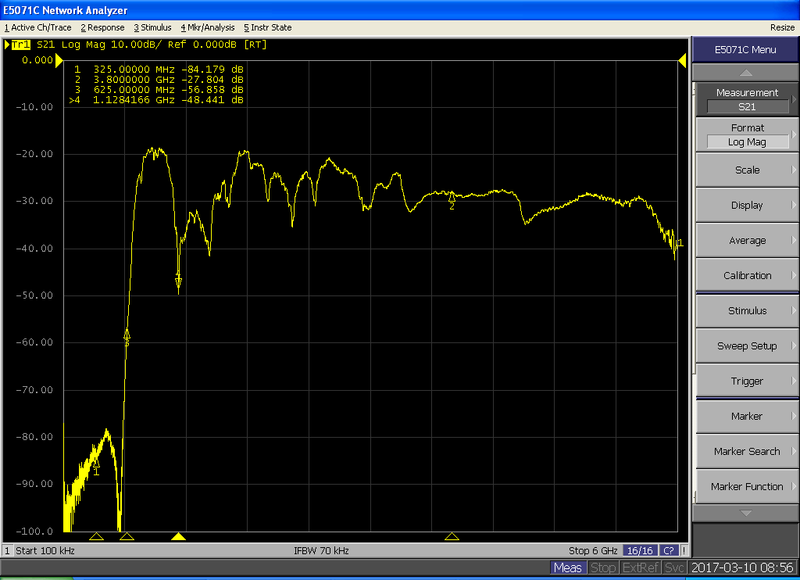 You can see thing over 625 MHz, the antenna has pretty good performance, with the exception of a tight notch at 1.12 GHz. This means unless you are really close to an FM broadcast station, you will not be able to receive FM with this antenna. (it has been done, and it does work - it just limits the distance between you and the antenna. Remember that most terrestrial FM broadcast stations are 10,000 to 20,000 watts). 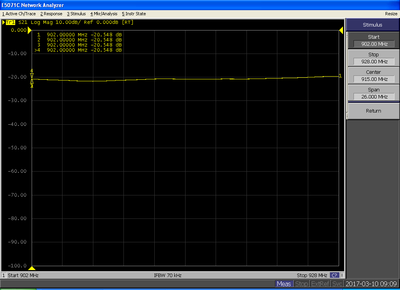 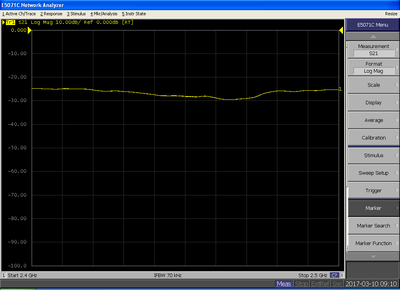 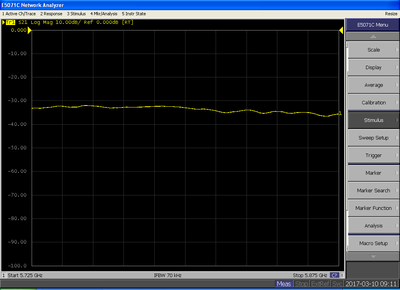