Whether you want to understand the changes between revisions, or just understand how to probe the PCB, this is where all the information should be.

The PlutoSDR includes a button (S1 on the PCB), and two USB connectors.

The button can be defined by software, it is normally held on with a paper clip or thumb tack during power on to put the device into a recovery mode. It can be re-purposed to do other things.

The second USB connector (the one on the side) is for power only when running in Host mode. 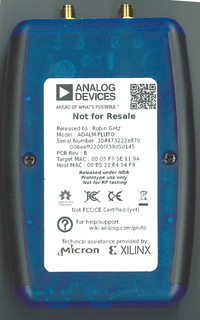 The plastic case comes off quite easily, with the removal of two black Phillips screws on the bottom of the case. This is a picture of the pre-production Rev B boards. The production version may be different. It will for sure be CE and FCC certified. (already passed).

Removing the screws will allow you to take the top off the case, and expose the PCB.

If you want to remove the PCB, and place it on the table, we recommend that you attach Cylindrical Bumpers (also known as feet), on the PCB to protect the components on the bottom of the PCB. These are not included in the design, and must be purchased separately (as we don't expect too many people wanting to do this).

When you order from ADI's authorized channels, you may get any revision listed below; there is no way to order one specific revision (it's a single part number), so do not ask - it's not possible. Normally inventory is managed via a FIFO (First In; First Out) mechanism, so the oldest inventory is shipped when an order is placed. However - warehouses have been known to misplace a box, and ship older inventory later.

If you really want to purchase a specific version - I'm sorry. There is no way. That's just what you read in the paragraph above. Emailing anyone to ask for a specific version will just get the same answer, and will consume everyone's time. Please don't do it.

Which revision do I have?

There are three ways to tell which revision you have (and they should all match):

Look at the sticker

It's printed on the back of the Pluto SDR (on the sticker) the below in Rev B: 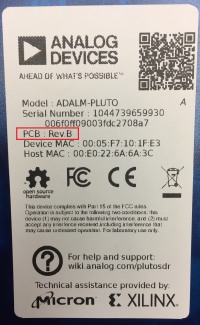 In the file:///D:/info.html#version page, it will tell you (assuming that your Pluto SDR drive is “D”):

Take it apart and look

The PCBs are slightly different (these pictures are the top sides). 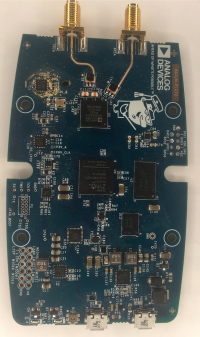 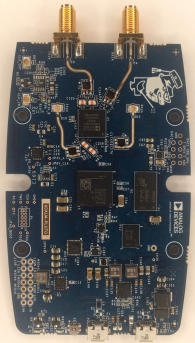 If you look close, the revision of the PCB is etched in metal on the side (Zoomed in for clarity).

Revision C was never released, and was identical to rev C (minus 2 blue wires1)), so we are only releasing rev D info. Since firmware is the same between rev D and C, the firmware identifies and recognizes rev D hardware as rev C.

The 2nd Rx/Tx channel internal to the rev D is not test during production test. If it works - bonus! If it doesn't work; Pluto is only advertised as a 1 Rx, 1 Tx radio, and that is guaranteed/production tested on each unit - and that is what you received.

Don't know yet - we will keep track of the list here.

Here are some pointers to datasheets that are sometimes hard to find.

Like all things, PlutoSDR is a integration/copy/paste of previous known working platforms. There were a few different AD936x /Zynq platforms that were worked on that we borrowed things from:

1)
Always doublecheck if UART Tx should be connected to Tx or Rx of the next chip, English nomenclature is terrible
2)
Power Supply Rejection Ratio
university/tools/pluto/hacking/hardware.txt · Last modified: 12 May 2021 11:36 by Mihai Bancisor