You can get the latest Windows release here:

Download MSYS2 from here: MSYS2 Download
Follow the instructions on the page linked above to install it, and update it.
!!!Open the MINGW64 shell of MSYS. Other terminals will not work! Make sure all packages are up to date.

When it's done, you need to install a couple of packages (64-bit or 32-bit) to be able to be build Scopy:

First, make sure you are running the 64-bit shell (MingW64) of MSYS2. It won't work in any other shell.

This will fetch the latest sources from GitHub to a “scopy” directory.
First, let's create a build folder so that we don't pollute the sources with generated files:


Scopy has many dependencies and various errors can occur when installing these manually.
To simplify things, we created two shell scripts: one to configure MSYS environment variables and one to download and install all the required components.
Run these as shown below.


The first script configures the environment variables(MingW version, system architecture,compliers, CMake options).
The second, which installs the dependencies, is similar to previous build guide:first, it installs the dependencies, that can be handled by pacman. After that, an archive of precompiled libraries(gnuradio, libsigrok, etc) is downloaded. Its contents are then installed.


If you are using 32-bit Windows, before you run the scripts, you need to edit the set_build_env_msys script to comply with your system architecture.

The file is should be located at C:\msys64\home\user\scopy\CI\appveyor.
Return to the MINGW64 shell prompt and run the scripts as indicated above.
Then, let's configure the build:


If everything goes well, it should say “Configuring done” and “Generating done”.
To build the project:

This can take as long as 10 minutes or more, depending on your CPU. 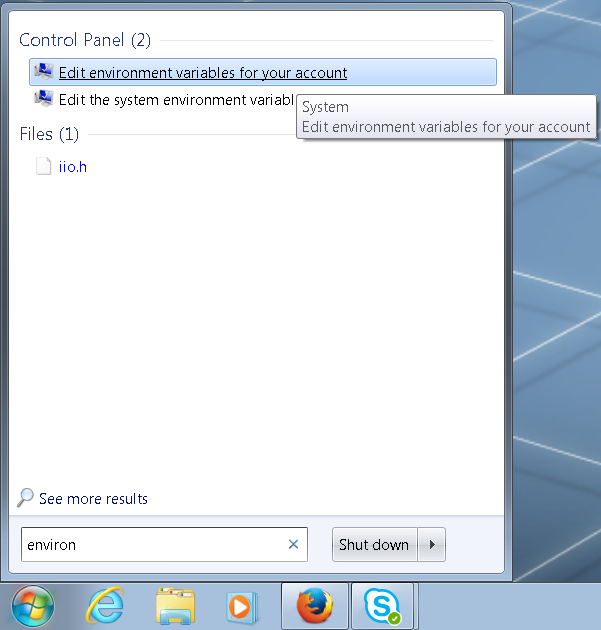 The following dialog will open: 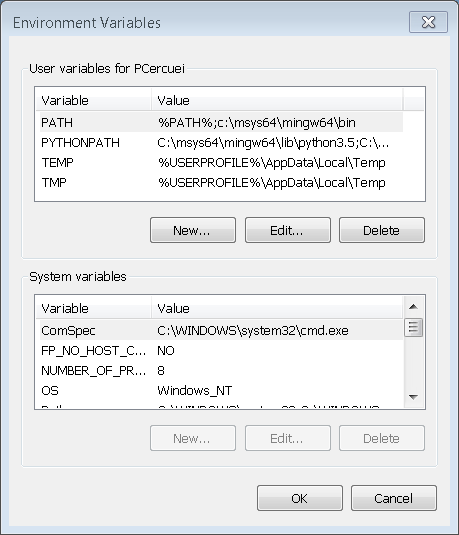 Once those steps are done, the Scopy you built should run. With the file explorer, navigate to:

To avoid using the MSYS terminal to rebuild the app, you can use QtCreator to build it.
First, you need to install it using an offline or an online installer from the official Qt Downloads page. In the installer,select only the QtCreator option. This way, only the creator will be installed. Other Qt Libraries needed we be uses from the MSYS folder. After you installed it, open it.


For the build to work, you need to configure a build kit to have the same compilers, Qt version and debugger you used when building from the MSYS terminal. To do this, open the configuration menu, as shown below and go to Kits. 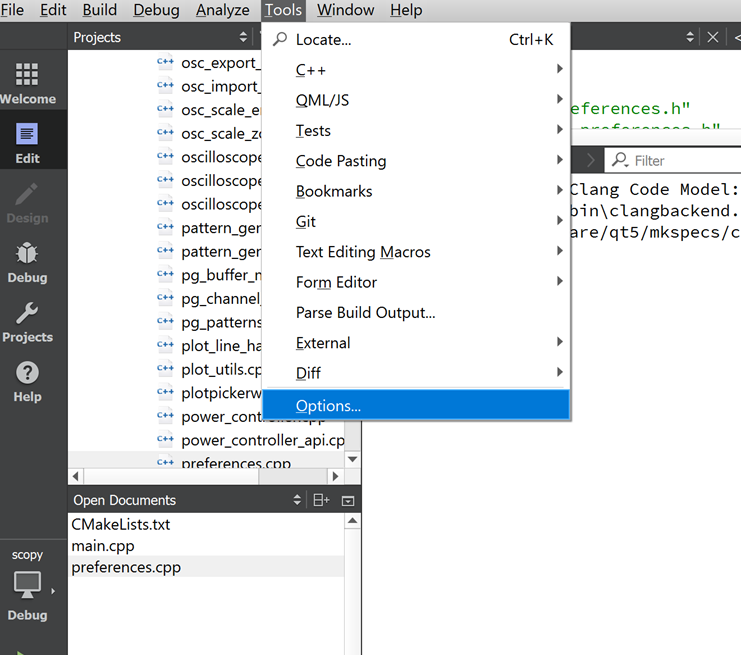 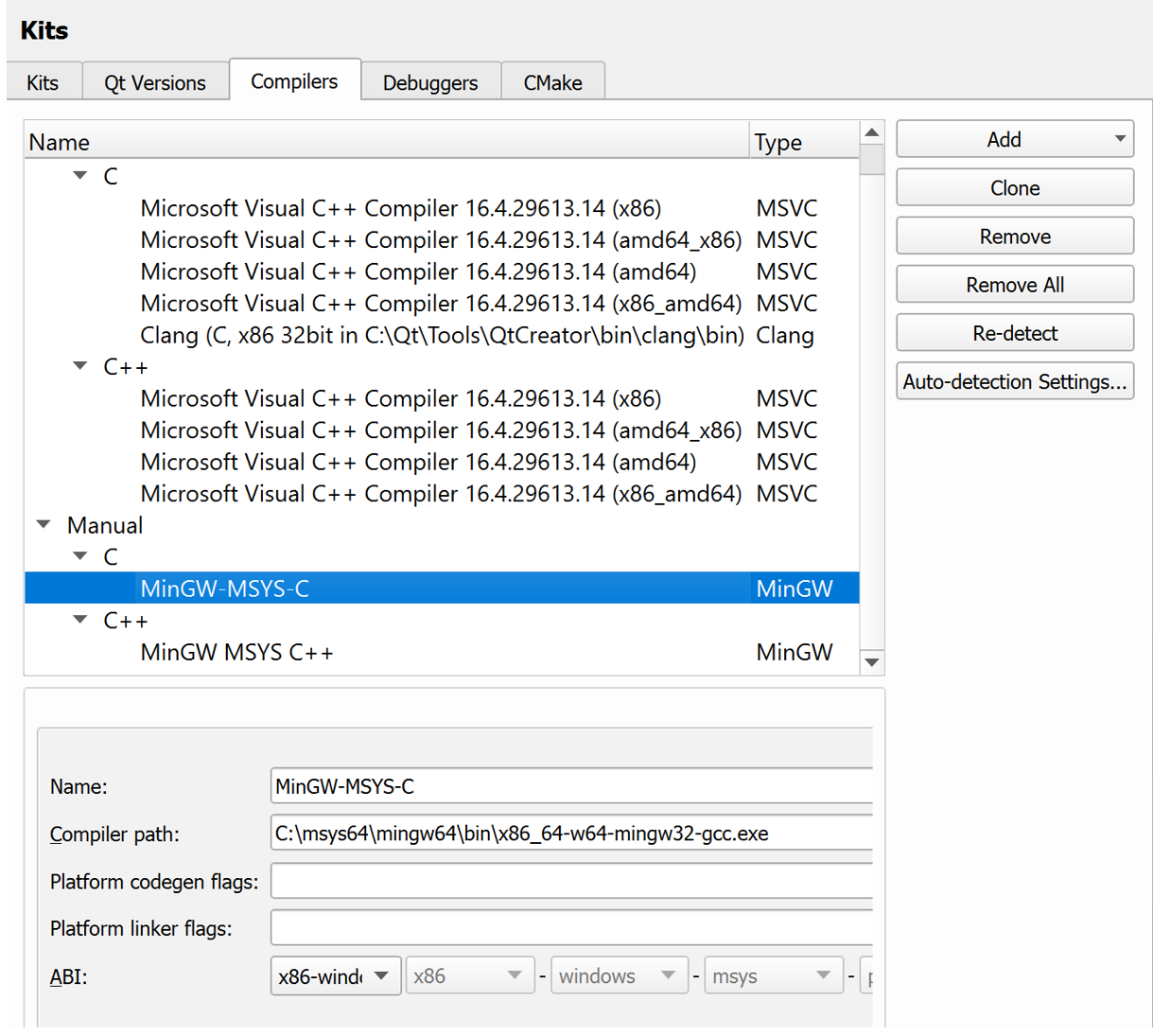 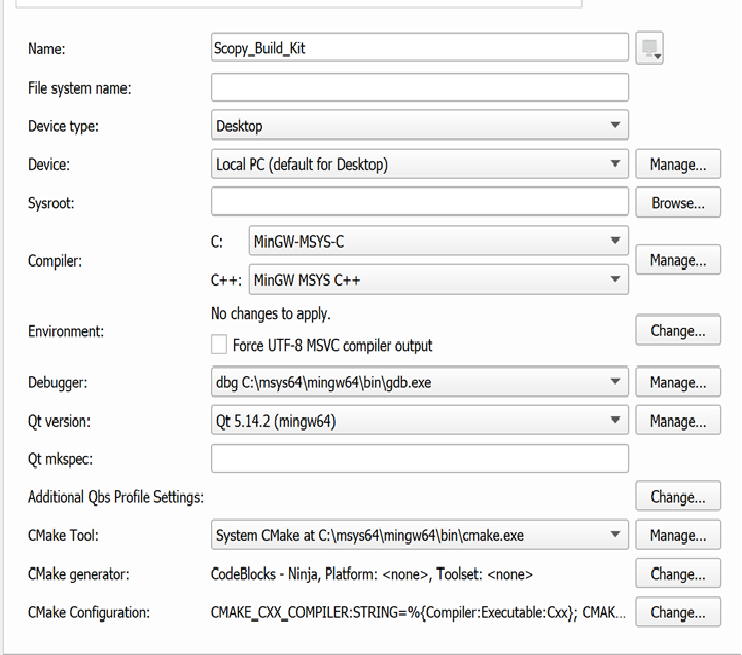 Select Ninja as the Cmake generator.
Name your kit, then select the tools from the msys folder, as indicated above, then click OK.

Now, to open Scopy as a project, click Open file or Project and open CMakeLists.txt. 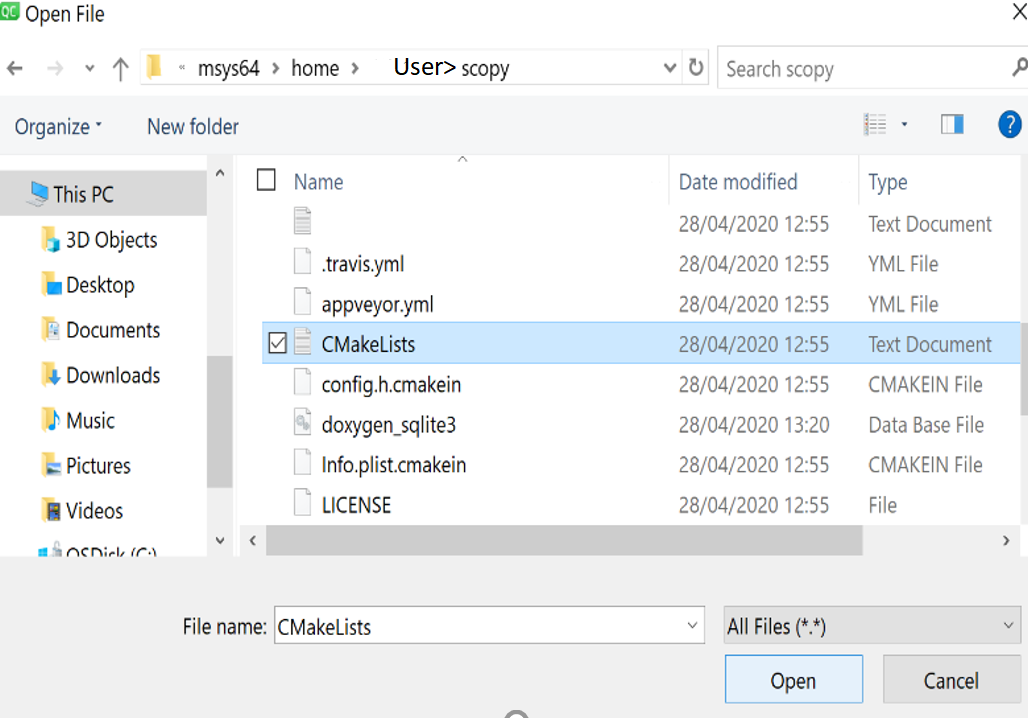 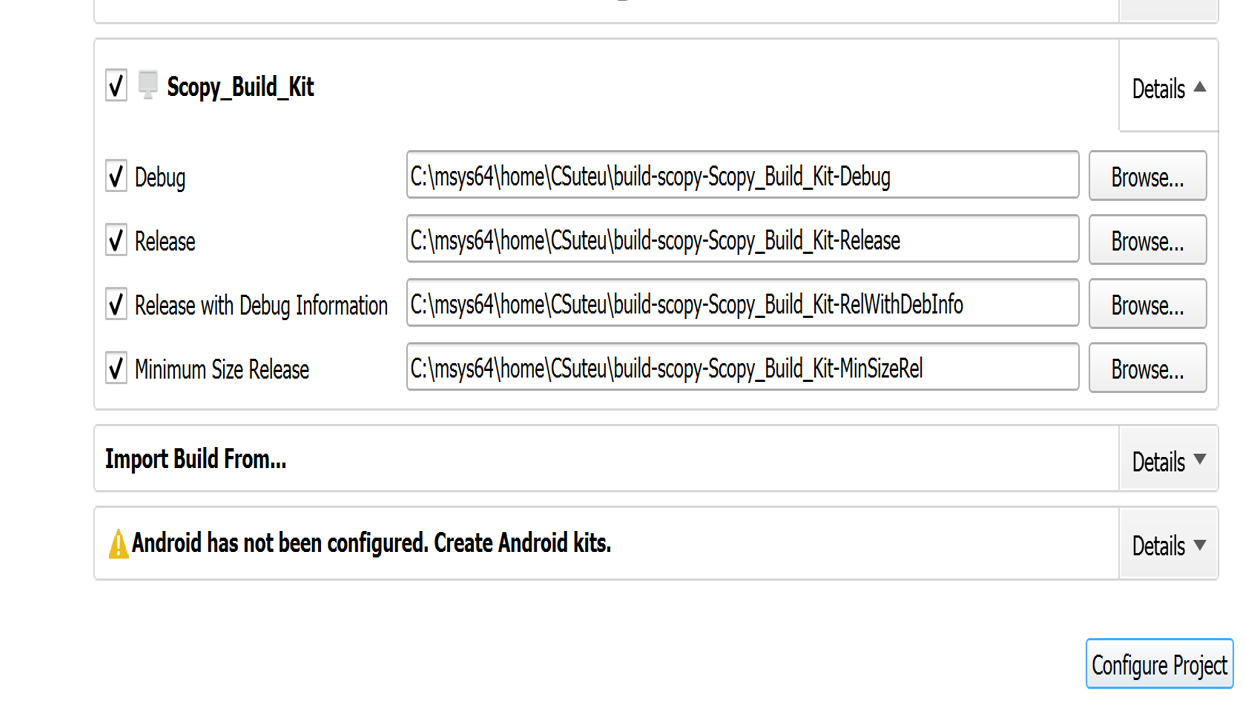 Now just click Build and Run and QtCreator will handle the rest.

In case Cmake will throw an error when you first try to build the project, you will need to edit the Cmake Configuration.
To do this go to Tools>Options again and select your kit. The last option in the configuration list is the CMakeConfiguration.
Click Change and add the path to your Cmake as indicated below. At the third line, add a “;” and then the full path (for example: C:\msys64\mingw64\lib\cmake).