It's a quick update to change the M2K network settings, which is described below.

When using multiple M2K devices on the same host, there are a few options:

In order to use multiple devices, you must change their IP address. This is managed by updating the config.txt file on the M2K mass storage device. 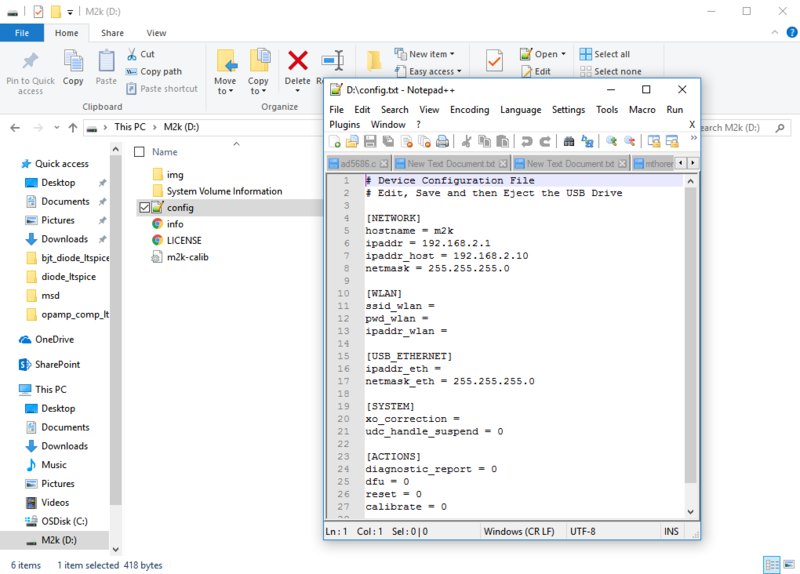 It's a simple matter of updating the [NETWORK] settings of the M2K ipaddr (default is 192.168.2.1), and your host PC settings ipaddr_host (default of 192.168.2.10). ip_addr and ipaddr_host must be unique, and must be on the same subnet. Separate M2Ks on the same machine must be assigned different subnets. It's not recommended to use the real internet subnet. After saving the file back to the M2K mass storage device, simply eject (not unplug) the M2K mass storage device from your host.

There is a Avahi deamon running on the M2K. Avahi is a free Zero-configuration networking (zeroconf) implementation, including a system for multicast DNS/DNS-SD service discovery. If you hostname is unique and your host is zeroconf enabled, you can simply connect to your M2K using hostname.local.

This section allows the user to perform certain [ACTIONS] The procedure is always the same. The config.txt file is edited using your favorite editor. Then the file is saved, finally the drive is ejected. (Not unplugged) After 2-3 seconds the drive reappears and may have some new file indicating some status.

Setting this to 1 will generate a file called diagnostic_report, which contains various status information about the system and the Hardware.

The information contained in this report can be used to asses and debug system problems or failures. In order to guarantee fast and precise support it is recommended to always include a diagnostic when reporting a problem.

Setting this to 1 will put the system into DFU mode. Device Firmware Upgrade (DFU) is a vendor- and device-independent mechanism for upgrading the firmware of USB devices.

Setting this to 1 simply resets and reboots the device.

Setting this to 1 will calibrate the board.

Use the device_passwd command to permanently change the password. This script/command calls the Linux passwd command and stores all user/password related files on mtd2 (JFFS2). The next time the system boots it will check all the MD5 sums and then uses this password instead.

This specifies any shell prompt running on the target. The # is the prompt, and the bold is what you type

Note: In case you forgot your password, there a mechanism which allows you to revert to the default password using the config.txt file on the mass storage device. Add revert_passwd = 1 under the [ACTIONS] sections, then follow the procedure described here: Config File ACTIONS

Use the device_persistent_keys command to permanently store your private SSH dropbear keys. This script/command copies the current key or generates one, which is now stored on mtd2 (JFFS2). The next time the system boots it will check the MD5 sum and then uses this key instead.

This specifies any shell prompt running on the target. The # is the prompt, and the bold is what you type