The objective of this exercise is to understand the operation of a Wien bridge oscillator, including a thorough understanding of the individual components:

Here is a complete video run-through of the experiment, including theory, construction, and measurements:

The Wien bridge oscillator was originally developed for telephony applications. The circuits in this excercise are modern adaptations of one described by a Stanford University student, William R. Hewlett,4 in his 1939 masters thesis (see Linear Technology Application Note 43, Appendix C, “The Wien Bridge and Mr. Hewlett”).

Oscillators are circuits that generate periodic waveforms without any input signal. They generally include some form of amplifier stage like transistors or OP-AMPs with a feedback network consisting of passive devices such as resistors, capacitors, or inductors. In order to oscillate, a linear circuit must satisfy the Barkhausen_stability_criterion, which in simple terms states that at the frequency of oscillation:

Consider the first one, and its consequences in an oscillator: If the loop gain is less than unity, the oscillations will die out. If the loop gain is greater than unity, the oscillations will increase in amplitude, either forever (which is possible in a simulation), or until something limits the amplitude (hopefully gracefully, and not as the result of a catastrophic failure.) If the end application is not very sensitive to distortion (output frequencies at multiples of the desired fundamental frequency), then simple gain limiting methods can be employed - this could be as simple as allowing the amplifier output to “clip” at the supply voltage. But if the application requires a pure sinewave, then carefully controlling the amplifier's gain is absolutely critical.

There are various feedback elements employed to generate the required frequency-dependent phase shift - quartz crystals, mechanical resonators, L-C (inductor-capacitor) networks. The Wien_bridge was developed by Max Wien in 1891, as an extension of the Wheatstone_bridge. Whereas the Wheatstone bridge consists of purely resistive elements, the Wien bridge can be used to measure capacitors. While initially intended as a measurement circuit, at balance, the phase shift of a Wien bridge is zero, so including a gain element with a phase shift of zero will satisfy one of the the Barkhausen criterion.
(It would have been impossible to make an oscillator in 1891 as no linear electronic gain elements existed - the audion tube was invented in 1906.)

There are several advantages to using a Wien bridge as the feedback element in an oscillator:

With the phase shift satisfied, the other half of the Barkhausen criterion is a loop gain of unity. At resonance, the reactive arm of the Wien bridge has an attenuation of 1/3, so the amplifier must have a gain of 3. The circuit shown in Figure X is a simple Wien bridge oscillator with a 1.0kHz output that illustrates this principle. 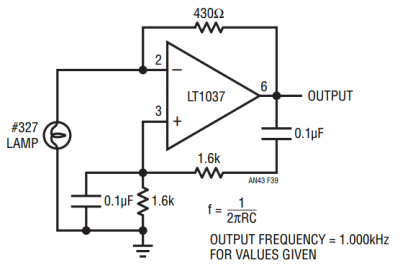 Once the circuit is oscillating, the amplitude control can be described as follows:

In order to become familiar with the operation of a bridge circuit, open the wheatstone_bridge.asc LTspice simulation shown in Figure X.

Note that the bridge is initially unbalanced, and a small, but nonzero voltage appears at Vcd. (A Voltage-controlled voltage source with a gain of unity is a convenient way to measure the difference between two nodes such that it appears in the simulation results.) Experiment with different values for R3, noting that a value of 10k should balance the bridge and give a zero output. Try reducing R1 and R2 to 1k - does this have any effect on the output voltage?

Open the basic_wein_bridge.asc LTspice simulation shown in Figure X. The simulation is set up as an AC sweep from 100Hz to 10kHz. (Note that a DC bridge supply would produce a fairly predictable output - node C woudl be at ground potential, and node D would be at 1/3 of the supply.) Run the simulation and probe node C, the output of the reactive arm of the bridge. Notice the “Gentle” hump in response, peaking somewhere slightly less than 2kHz. Probe node Vcd next. Notice the extremely sharp null in response, making it very easy to locate the exact resonant frequency of 1.59kHz. 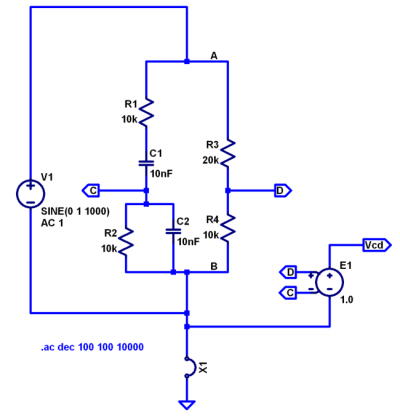 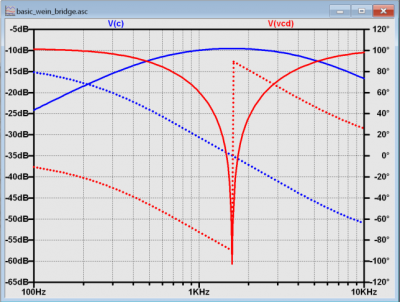 Open the wien_bridge_vcvs_gain.asc LTspice simulation. This is a circuit that is impossible to build in real-life - the gain stage is essentially perfect - infinite input impedance, zero output impedance, and no offset or gain error. But it allows us to experiment with ideal cases, to gain some intuition into the Barkhausen criterion and test out some assertions made in the background information. 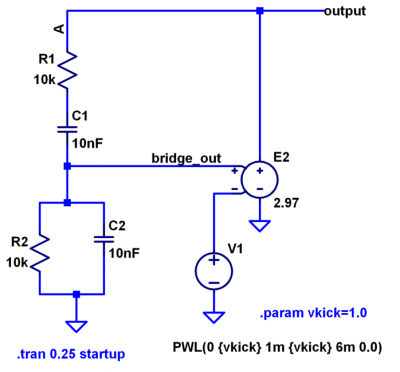 Ignoring V1 for the moment, note that when this simulation is started, all voltages are zero. There is no reason for it to do anything other than stay at zero forever. V1 is there to “kick” the circuit into operation by providing a step to the gain stage when the simulation is first started, then it ramps back to zero and has no further effect on the circuit's operation.
Run the simulation, and probe the output node. Results should look similar to Figure X. 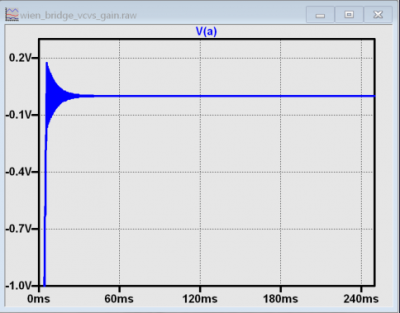 Note that the circuit oscillates a for a few milliseconds, but the amplitude exponentially decays to zero. This is because the gain is set 1% too low (as you might expect if you built an amplifier with 1% resistors.) Next, set the value for E2 to 2.997, or about 0.1% too low. Oscillations continue longer, but still decay. 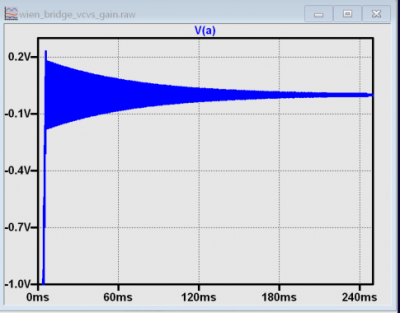 Since we know that the gain needs to be exactly 3 to sustain oscillation, set the gain to 3.0 and run the simulation. 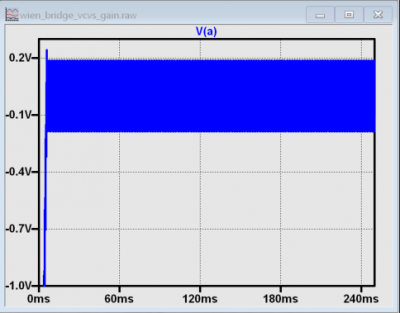 Notice that the operation is exactly as predicted, with a steady amplitude for the entire 250ms simulation time. This would never happen in real life, or even with simulations using a model of a real amplifier - the finite gain, finite input impedance, would cause the gain to be slightly more or less than 3.

As a final illustration that simulations can model situations that would be impossible in the real world, set the gain to 3.03 (1% too high) and run the simulation. 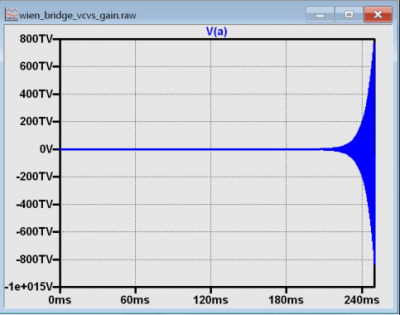 The output amplitude hits 15 TERAVOLTS after 250ms, with no end in sight. Again, this simulation is only to build intuition about the Barkhausen criterion and has no basis in reality. If you were to build this circuit with an op-amp configured with a gain of 3.03 and powered by +/-5V, oscillations would build until they approached 5V amplitude, then simply “clip” (producing a distorted waveform.)

The circuit shown in Figure X is a complete (and practical) Wein bridge oscillator circuit that can be built on a breadboard and run as a simulation (wien_bridge_osc_complete.asc). Rather than using an incandescent bulb (which has a positive coefficient of resistance) for the amplifier's input resistor, this circuit shunts part of the feedback resistance with diodes, which have a negative coefficient of resistance. Ignoring the diodes, the gain would be 1+(10k+4.7k)/(4.7k+2k)), or about 3.19. But as the voltage across D1 and D2 approaches 600mV or so, the effective resistance of R2 is reduced, dropping the gain. 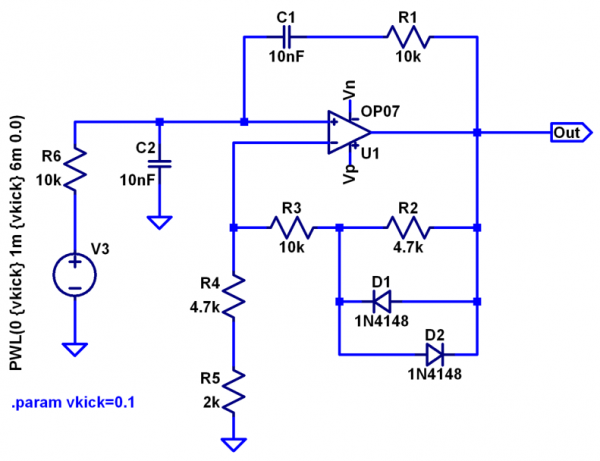 Run the simulation. The “kick” circuit is not necessary to get the simulation to start… eventually. But the amplfier's offset in the model is quite low, so the kick helps the simulation start up much faster. Startup time is also a concern in some real-world applications, and circuits similar to V3, such as a pulse generator made from logic gates can be employed. Experiment with different valus for vkick (including zero). 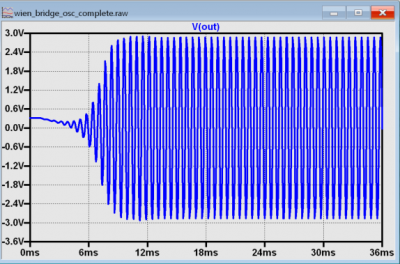 Next, construct the circuit as shown in Figure X. 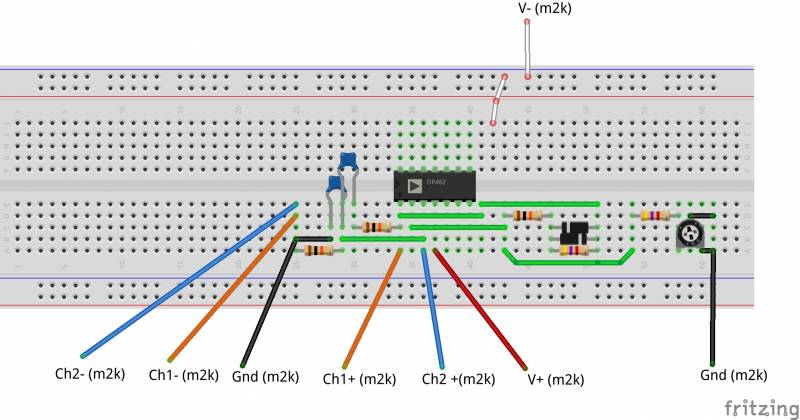 Note that R5 is a potentiometer, allowing the gain of the circuit to be “dialed in” to where oscillation just starts. Measure the output with Scopy's oscilloscope, results should be similar to Figure X. 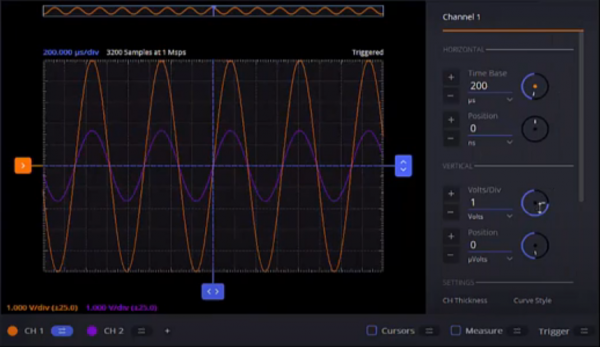 What is the relationship between the gain control elements and distortion?