The objective of this Lab Activity is to investigate transformer characteristics in various configurations.

Transformers only work with alternating current, AC. For example transformers reduce the 120V wall power by stepping the voltage down to more convenient levels for most consumer electronic applications (only a few volts) or for other low power applications (typically 12V). Transformers also step the voltage up for long distance transmission, and down for safe distribution. Without transformers, the waste of electric power in distribution networks, already significant, would be enormous. It is possible to step up or down DC voltages, but the techniques are more complicated than with AC transformers and actually involve turning the DC voltage into some form of AC signal in the process. Further, such conversions are often inefficient and/or expensive. AC has the further advantage that it can be used to drive AC motors, which are usually preferable to DC motors for high power applications. While transformers are most visible in power applications, they serve important roles in many other communications related signal paths at audio and RF frequencies.

The transformer core has high magnetic permeability, i.e. a material that forms a magnetic field much more easily than in free space, due to the orientation of atomic dipoles. In figure 1, the core is made of laminated soft iron but at higher frequencies ferrite is more common. The result is that the magnetic field is concentrated inside the core, and almost no field lines leave the core. 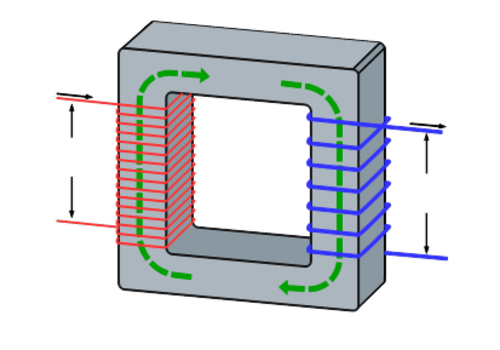 It follows that the magnetic flux φ through the primary and secondary are approximately equal, as shown. From Faraday's law, the emf in each turn, whether in the primary or secondary coil, is the negative of the derivative of the magnetic flux with respect to time or, -dφ/dt. Neglecting the winding resistance and other losses in the transformer, the terminal voltage equals the emf. For the Np turns of the primary, this gives:

For the Ns turns of the secondary, this gives:

Where r is the turns ratio.

What about the current? Again, neglecting losses in the transformer, and if assuming that the voltage and current have similar phase relationships in the primary and secondary, then from conservation of energy we can write, in steady state:

Power in = power out,

You never get something for nothing. For a step up transformer, if you increase the voltage, you decrease the current by (at least) the same factor or turns ratio. Note that, in the figure, the coil with more turns has thinner wire, because it is designed to carry less current than that with fewer turns.

In communications related applications, transformers are most often used between sections of the circuits to match impedances. As we just saw a transformer converts alternating current at one voltage amplitude seen at the primary to another voltage amplitude at the secondary. The total power input to the primary and output from the secondary is the same ( except for internal losses ). The side with the lower voltage is at lower impedance (because this has the lower number of turns), and the side with the higher voltage is at a higher impedance (as it has more turns in its coil).

Manufacturer datasheets list certain electrical characteristics for the devices. Probably the most important for our purposes is the winding inductance. For power conversion applications the DC resistance (DCR), the maximum rms current (Irms), and saturation current Isat are also specified.

For higher inductance, multiple windings (WN) can be connected in series. As the inductance increases, energy storage and Irms remain the same, but DCR increases and Isat decreases.

Note: this Wn2 factor is only valid when the coupling factor between windings is exactly ( or very nearly ) one. A more general formula is LT = L1 + L2 + 2M

Before measuring the frequency response of the transformers supplied in your parts kit, create a simulation schematic similar to figure 2 and perform an AC sweep from 10 KHz to 10 MHz. Use the manufacturer's datasheet to set the values for the winding inductance ( mutual inductance for an ideal transformer ) and resistance. Assume that the coupling factor is 1. For this analysis we will assume that the parasitic turn to turn capacitance is small enough to ignore.

Open the Network Analyzer Instrument and set the sweep to start at 10 KHz and stop at 10 MHz. The Max gain should be set to 1X. Set the Amplitude to 1V and the Offset to zero volts. Under the Bode scale set the magnitude top to 10 dB and range to 80 dB. Set the phase top to 180º and range to 360º. Under scope channels click on use channel 1 as reference. Set the number of steps to 200.

Run a single sweep for each 1:1 winding configuration for the two transformers in your kit of parts. You should see amplitude and phase vs frequency plots that look very similar to your simulation results. Be sure to export the data to a .csv file for further analysis in either Excel or Matlab.

How do your measurements compare to the winding inductance specified in the manufacturer's datasheet?

Step Up and Step Down Configurations

Figure 5 Step Up (red) and Step Down (blue) connections

Use the impedance matching formula to calculate the appropriate value for RL in both cases. Repeat the same frequency sweeps using the Network Analyzer tool. Be sure to export the data to a .csv file for further analysis in either Excel or Matlab. Compare the measured low frequency roll off points with those measures in the 1:1 configurations from figure 2.

For additional credit calculate the correct RL for other possible step up and step down ratios possible with these 6 winding transformers such as 1:3, 2:3, 3:1, 3:2 etc. Measure and report the data for as many different configurations as you have time for.