Common-emitter and emitter-follower amplifiers are the most widely used single-transistor amplifiers. The common-base configuration, illustrated below in its basic NPN form, is used less frequently as a stand-alone voltage amplifier stage, mostly because it has a low input resistance, but it is often combined with a common-emitter stage to form a cascode amplifier. In a common-base voltage amplifier, the input voltage is applied to the emitter and the output voltage is taken from the collector, and the input and output voltages are in-phase. The in-phase relationship can be understood by observing that when the signal voltage applied to the emitter increases, the base-emitter voltage vBE decreases, causing the emitter/collector current to decrease, decreasing the voltage drop across the collector resistor, RC, thereby increasing the collector voltage. Because of its low input resistance, the common-base amplifier is sometimes used as a current-in/voltage-out amplifier or current buffer. Its operation in the cascode configuration is acting as a current-in/voltage-out amplifier because it takes the collector current from the common-emitter stage as its input and produces an output voltage at its collector. 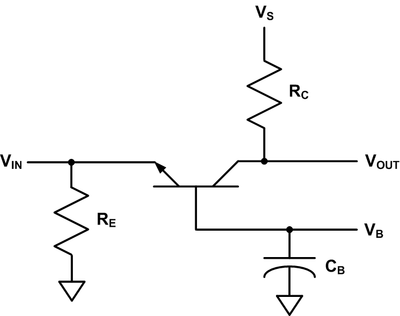 As with all linear Class A BJT amplifiers, the transistor must operate in the forward active region in the common-base amplifier. This means that the base-emitter junction must be forward biased, the collector-base junction must be reverse biased, and operation must be prevented from entering the saturation region. These bias conditions can be seen in the schematic shown in the “Procedure” section for the common-base stage as well as the CE stage in the cascode amplifier. The base is often biased using a resistive voltage divider, voltage regulator, or available power supply, and an emitter resistor, RE is used to establish the emitter current. The base should always be bypassed with a capacitor that produces a low impedance AC ground at all signal frequencies. If the amplifier is DC-coupled, the voltage source applied to the base must also provide a low DC resistance. The collector circuit is similar to what is used in the common-emitter amplifier, and in its simplest form consists of a resistor, RC connected between the collector and the power supply.

The approximate overall gain of the cascode stage can be quickly determined by inspection, using a few simplifications used in the common-emitter lab. The first simplification is to ignore base currents and think of the emitter and collector currents in both transistors all being equal. Referring to the cascode amplifier schematic, we can think of the same current flowing through the path consisting of the collector and emitter of the common-base transistor into the collector and emitter of the common-emitter stage, much in the same way as the current would flow in a series circuit. Using the results from the common-emitter lab, we can see that when the emitter bias resistor is fully bypassed, the AC voltage gain of the cascode amplifier is simply -RC/re,CE. In our circuit, part of the emitter bias resistor is bypassed and part is not. THe two 100 Ω resistors are bypassed with the 220 μF capacitor, leaving the 47 Ω resistor unbypassed. The unbypassed portion of the emitter bias resistor RE,UBP is in series with re,CE, so the total emitter resistance used for AC signal gain is now re,CE + RE,UBP. The general approximate voltage gain for the cascode amplifier can now be expressed as

In the cascode amplifier studied in this lab, the collector DC bias current IC is approximately 2.8 mA, so re,CE can be calculated to be

We can now calculate the overall voltage gain as

The output voltage is biased up at approximately 3.7 VDC which allows a +/-1 V output signal to swing with minimal distortion.