When beginning to explore electricity and Electrical Engineering, it is useful to start by understanding the basic relationships between voltage, current, and resistance. These are the three basic quantities required to understand and use electricity. At first, these concepts can be difficult to understand because they cannot be physically “seen”. We cannot see with the unaided eye the energy flowing through a wire or the voltage of a battery sitting on a bench. Even lightning in the sky, while visible, is not truly the energy exchange occurring from the clouds to the ground, but it is the heating of the air by the energy passing through it that produces the flashes of light. In order to detect this electrical energy, we must use measurement tools such as multi-meters, oscilloscopes and spectrum analyzers to visualize what is happening with the electrical signals in a system. Fear not, however, this lab activity will give you the basic understanding of voltage, current, and resistance and how the three relate to each other.

Electricity is the movement (flow) of electrons. Electrons are atomic particles with a negative charge. Moving these charges can be harnessed to do work. A light bulb, a fan, a radio, a mobile phone, etc., are all harnessing the movement of the electrons in order to perform some function. They all operate using the same basic energy source: the storage and movement of electrons.

The three basic principles for this activity can be explained using electrons, or more specifically, the charge they create:

1. Voltage is the difference in charge (more electrons, less electrons) between two points in space.
2. Current is the rate at which charge (electrons) is flowing between two points usually through some material.
3. Resistance is a material's tendency to resist the flow of charge (electrical current). Materials with very low resistance are called conductors. Materials with a very high resistance are called insulators.

So, when we talk about these values, we're really describing the movement of charge, and thus, the behavior of electrons. A circuit is a closed loop that allows charge to move from one place to another. Components in the circuit allow us to control this charge and use it to do work. 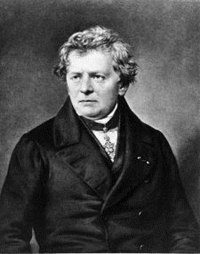 Georg Ohm was a Bavarian scientist who studied electricity. Ohm starts by describing a unit of resistance that is defined by current and voltage. So, let's start with voltage and go from there.

We define voltage as the amount of potential energy between two points on a circuit. One point has more charge (electrons) than another. This difference in charge between the two points is called voltage. It is measured in volts, which, technically, is the potential energy difference between two points that will impart one joule of energy per coulomb of charge that passes through it (don't panic if this physics jargon makes no sense, it is not really important at this point). The unit “volt” is named after the Italian physicist Alessandro Volta who invented what is considered the first chemical battery. Voltage is represented in equations and schematics by the capital letter “V”.

We can think of the water tank as a battery, a place where we store a certain amount of energy and then release it. If we drain our tank a certain amount, the pressure created at the end of the hose goes down. We can think of this as decreasing voltage, like when a flashlight gets dimmer as the batteries run down. There is also a decrease in the amount of water that will flow through the hose. Less pressure means less water is flowing, which brings us to current.

This brings us back to Georg Ohm. Ohm defines the unit of resistance of “1 Ohm” as the resistance between two points in a conductor where the application of 1 volt will cause 1 ampere, or 6.241×1018 electrons per second to flow. This value is usually represented in schematics with the Greek letter “Ω”, which is pronounced omega, and sounds a lot like “ohm”.

Combining the elements of voltage, current, and resistance, Ohm developed the formula:

Where:
V = Voltage in volts
I = Current in amps
R = Resistance in ohms

This is called Ohm's law. For example, say that we have a circuit with the potential of 1 volt, a current of 1 amp, and resistance of 1 ohm. Using Ohm's Law we can say:

Going back to the water analogy, say this represents our tank with a wide hose. The amount of water in the tank is defined as 1 volt and the “narrowness” (resistance to flow) of the hose is defined as 1 ohm. Using Ohms Law, this gives us a flow (current) of 1 amp.

Now consider at the tank with the narrow hose. Because the hose is narrower, its resistance to flow is higher. For the case with a narrower hose we can define the resistance to be twice as much or 2 ohms. The amount of water in the tank is the same as the other tank so the voltage is the same. Using Ohm's Law, our equation for the tank with the narrow hose is:

But what is the current? Because the resistance is greater, and the voltage is the same, this gives us a current value of 0.5 amps:

So, the current is lower in the tank with higher resistance as we predicted. Now we can see that if we know two of the values for Ohm's law, we can solve for the third.

Let's demonstrate this with an experiment.

For this experiment, we want to light up an LED (Light Emitting Diode). LEDs are somewhat fragile and should have only a certain amount of current flowing through them. Current larger than the maximum allowed can burn them out. In the datasheet for an LED, there will always be a “current rating”. This is the maximum amount of current that can flow through the particular LED before it is damaged.

We will be using the +5V power supply from the ADALM2000 as the voltage source.

ADALM2000 Active Learning Module
Solder-less breadboard, and jumper wire kit
1 LED, the longer of the two leads is the anode (+) and the shorter lead is the cathode (-)
1 Resistor

NOTE: LEDs are known as “non-ohmic” devices. This means that the equation for the current flowing through the LED itself is not the simple linear relationship V=IR. The LED is a special kind of diode. All diodes have something called an internal “voltage drop”. However, in this experiment we are simply trying to protect the LED from conducting too much current, so we can neglect the non-ohmic current characteristics of the LED for the moment and choose the resistor value using just Ohm's Law in order insure that the current through the LED will be safely less than 20mA.

For this example, we have the V+ output of the ADALM2000 configured to generate 5V and a (red) LED with a current rating of 20 milliamps, or 0.020 amps. To be safe, we would rather not drive the LED at its maximum current but rather its suggested current, which is listed on its datasheet as 18mA, or 0.018 amps. If we simply connect the LED directly to the battery, the values for Ohm's law look like this:

With just wire and no resistor yet:

Dividing by zero results in infinite current! Not actually infinite in practice, but as much current as the +5 volt supply of the ADALM2000 can deliver. We certainly do not want that much current flowing through the LED. We are going to need to include a resistor. 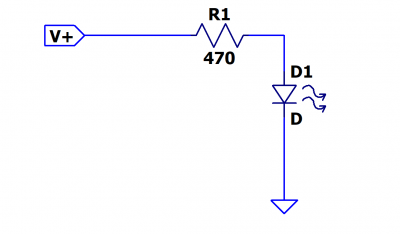 We can use Ohm's Law to determine the resistor value that will give us the desired current value:

Solving for the resistance:

So, the resistor value we need for R1 is around 277 ohms to keep the current through the LED under the maximum current rating.

277 Ohms is not a common value for off-the-shelf resistors, so for this experiment use a 470 ohm resistor (yellow purple brown) which is the next closest value greater than 277 in the ADALP2000 parts kit. Below is what your circuit should look like all put together.

Success! We've chosen a resistor value that is high enough to keep the current through the LED below its maximum rating, but low enough that the current is sufficient to keep the LED nice and bright. Enable the positive power supply to 5V. If the LED does not light up be sure to double check that the (+) and (-) ends of the LED are connected correctly.

This LED/current-limiting resistor example is a common occurrence in electronics. You'll often need to use Ohm's Law to change the amount of current flowing through the circuit.

Current Limiting Before or After the LED?

To make things a little more complicated, you can place the current limiting resistor on either side of the LED, and it works just the same.

Many readers learning electronics for the first time struggle with the idea that a current limiting resistor can be inserted on either side of the LED and the circuit will still function as usual. Try swapping the resistor and LED in your circuit. Does the LED still light up with the same brightness for both cases?

This is an oversimplification, as the current limiting resistor can only be placed in the circuit in two places; it can be placed on either side of the LED to perform its function.

For a more scientific answer, we turn to Kirchoff's Voltage Law. It is because of this law that the current limiting resistor can go on either side of the LED and still have the same effect. For more info and some practice problems using KVL, visit this website.

Measuring the actual Voltage and Current 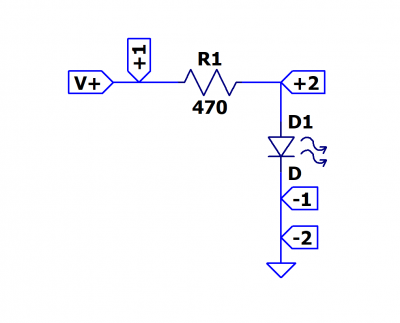 Schematic, Measure the actual voltages in the circuit.

Connect the voltmeter inputs as shown.

Breadboard connections for measuring the actual voltages in the circuit.

Start the Scopy Voltmeter tool. The interface looks like this. 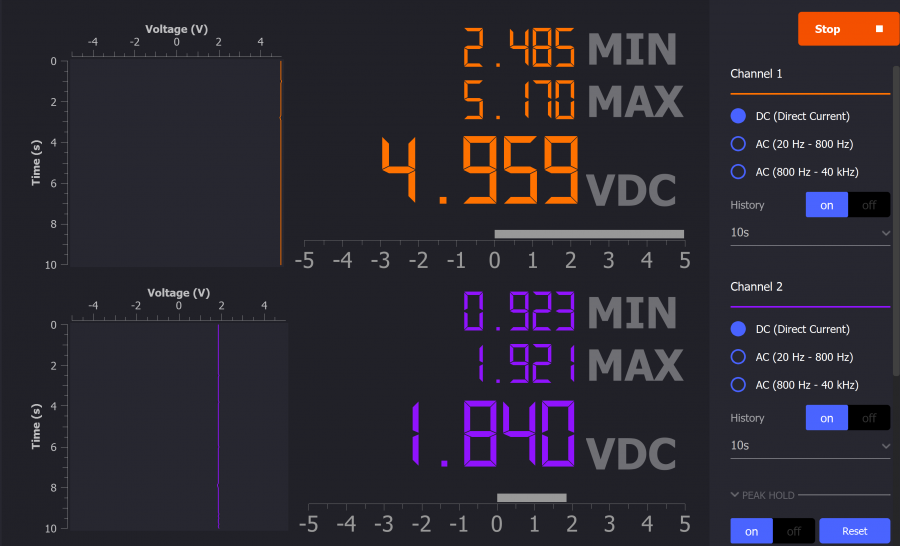 Click on the green Run button and the circuit voltages will be displayed. The Channel 1 Voltage should display the actual value of the +5 V power supply. The Channel 2 Voltage should display the actual voltage across the LED diode. In this example for a red LED the voltage was 1.84 volts. The difference between these two voltages, Channel 1-Channel 2 V, will be the voltage across the resistor which in this example was 3.12 volts.

We can use Ohm's law to calculate the current in the resistor:

Now you should understand the concepts of voltage, current, resistance, and how the three are related. Congratulations! The majority of equations and laws for analyzing circuits can be derived directly from Ohm's Law. By knowing this simple law, you understand the concept that is the basis for the analysis of any electrical circuit!

These concepts are just the tip of the iceberg. If you're looking to study further into more complex applications of Ohm's Law and the design of electrical circuits, be sure to check out the following hands on activities.