Debugging UART with the ADALM2000

The objective of this tutorial is to use the Pattern Generator and Logic Analyzer instruments provided by the ADALM2000 (M2K) board and the Scopy software toolset to visualize UART (Universal Asynchronous Receiver/Transmitter) transactions between two devices.

The EVAL-ADICUP3029 microcontroller board and a typical software project that uses the UART communication module, waits for input data from the user, and then echoes it back through the pins available on the board.

A Universal Asynchronous Receiver/Transmitter (UART) is a computer hardware device for asynchronous serial communication in which the data format and transmission speeds are configurable. Its purpose is to transmit and receive serial data, using only two wires to communicate between devices (TX and RX). In the past, UARTs were separate integrated circuits, such as the industry standard 16550. However, most modern microcontrollers include one or more UART peripheral devices on-chip, requiring only an external physical interface device, such as a line driver / receiver or USB-UART interface device.

A UART transmits data asynchronously, which means there is no clock signal to synchronize the output of bits from the transmitting UART to the sampling of bits by the receiving UART. The UART transmit contains start and stop bits to frame the data byte being transferred. These bits define the beginning and end of the data byte so the receiving UART knows when to start (and stop) reading the bits.

When the UART receiver detects a start bit, it starts to read the incoming bits at a specific frequency, called the baud rate. Baud rate is the rate at which data is transferred, expressed in bits per second (bps). Both UARTs (Rx and Tx) must be configured at almost the same baud rate. This scheme is tolerant of a slight mismatch in baud rate between the transmitting and receiving devices; a typical 8-bit byte can tolerate approximately 10% difference in baud rate between transmitter and receiver before a bit error occurs.

UART data is organized into bytes. Each byte contains 1 start bit, 5 to 9 data bits (depending on the UART), an optional parity bit, and 1 or 2 stop bits.

A parity bit may be included after the data bits. Parity describes the evenness or oddness of a number.

The parity bit is simple error detection scheme, and will detect all single-bit errors. Bits can be changed during transmission by mismatched baud rates, noise picked up on long distance data transfers, etc. Like baud rate, both transmitter and receiver must be set to the same parity configuration.

To signal the end of the data byte, the sending UART drives the data transmission line from a low voltage to a high voltage for at least two bit periods.

Figure 4. shows the hardware connection between M2K board and EVAL-ADICUP3029. 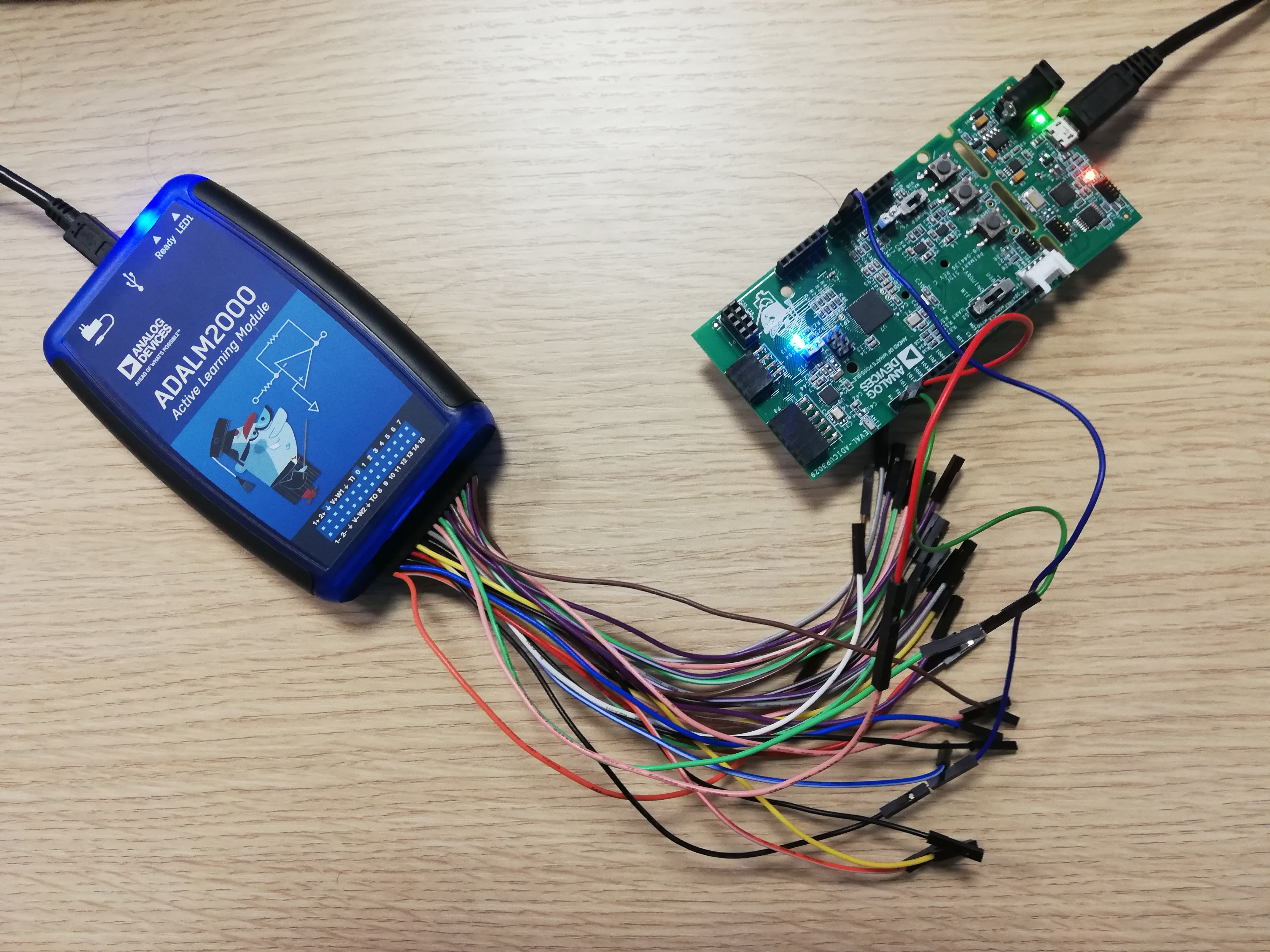 The UART pins for the EVAL-ADICUP3029 are available for communication at port P7.

There are several options for which software to use for this demonstration; the main requirement is that it implement some sort of command-line interface that echoes characters back as they are typed. The CLI example project for the EVAL-ADICUP3029 can be used:

First, set up the Pattern Generator to transmit test data to EVAL-ADICUP3029.

The EVAL-ADICUP3029 software application has the UART configured as follows:

For transmission, we will use only one digital channel as Tx. Open the Pattern Generator instrument, select DIO0 channel and press “Group with Selected” button. This will display the decoded pattern for our application based on the data that we want to send.

On the left side of the user interface, a settings menu is available. Configure the UART settings to match the software application that we want to debug.

An example for the Pattern Generator setup is presented in Figure 5. 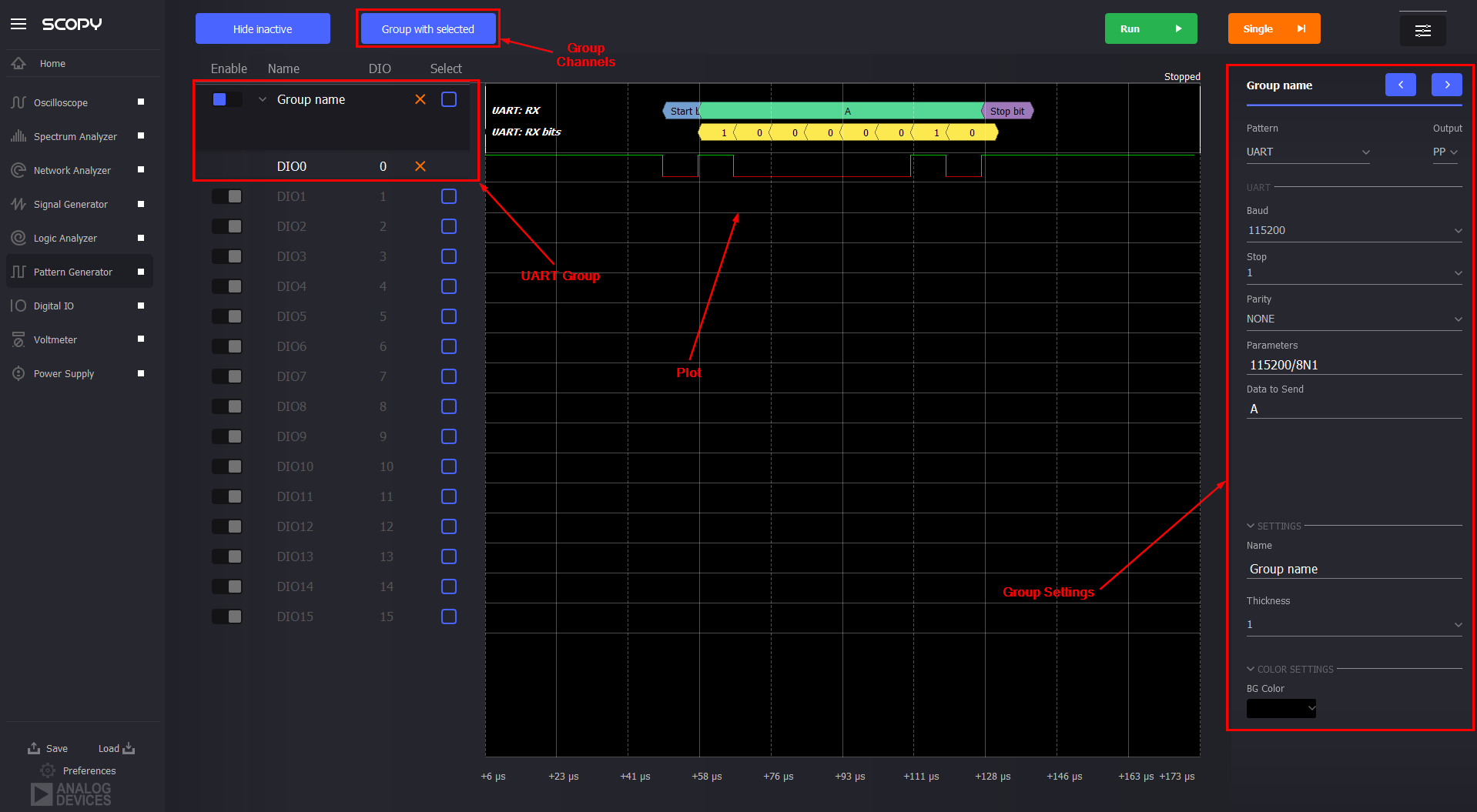 Several UART configuration parameters need to be determined in order to properly configure Scopy. For the EVAL-ADICUP3029 project, they are as follows:

An overview of the user interface is shown in Figure 6. 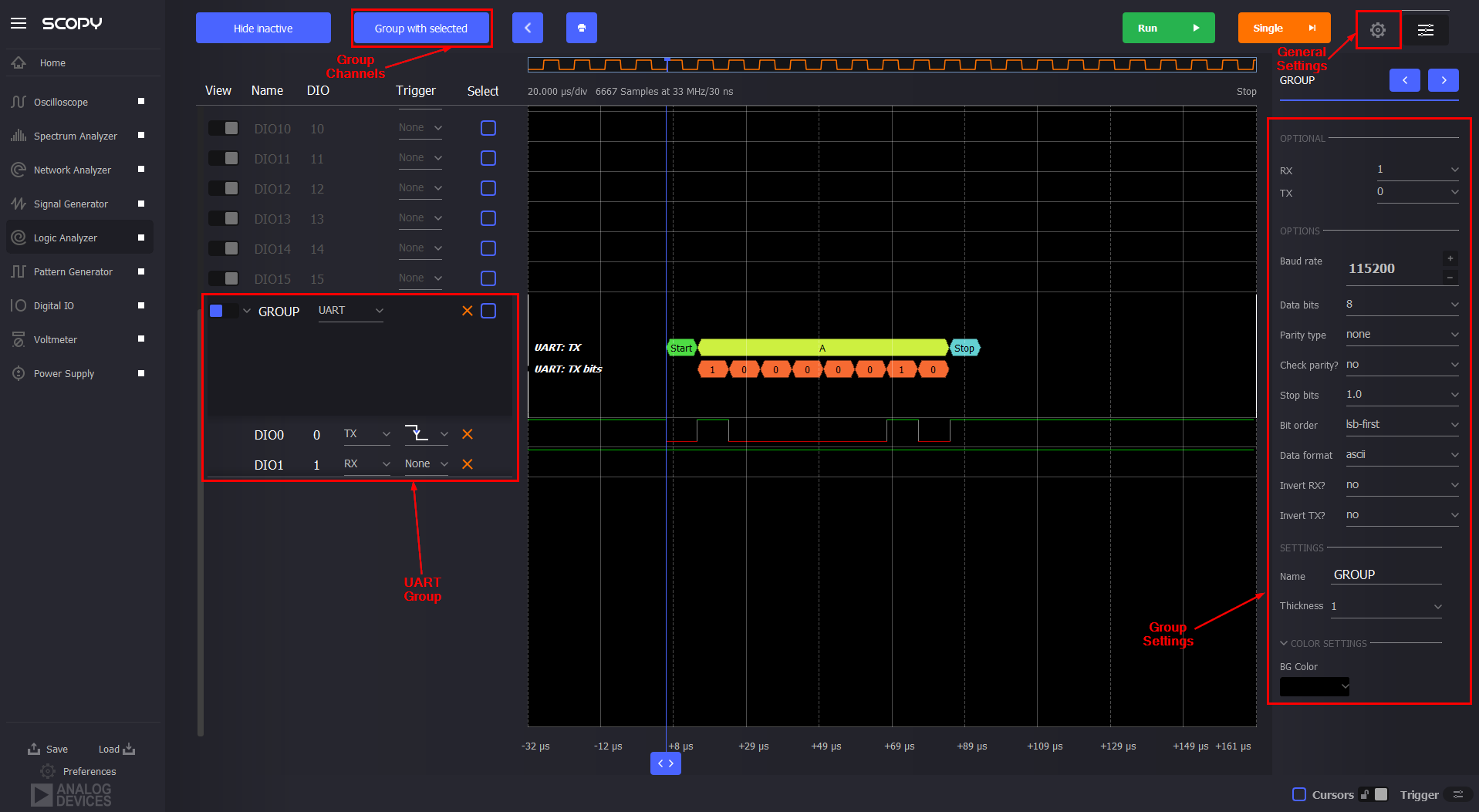 Select the channel group formed and apply the UART decoder. While the group is selected, open settings menu by pressing the

button on the top right side of the user interface. A settings panel will appear for the UART decoder, allowing the signal-channel configuration and parameters setup. Apply the parameters listed above to the group. 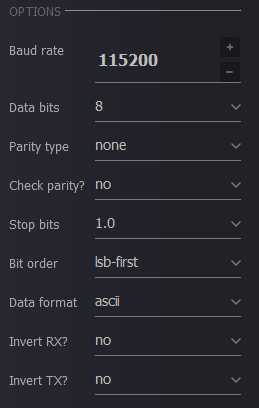 The Logic Analyzer must be set up to “catch” the UART byte transfer on the Logic Analyzer plot. Since the UART transfer starts with a start bit, (transmit line is pulled from high to low), we can use this event to trigger the capture. 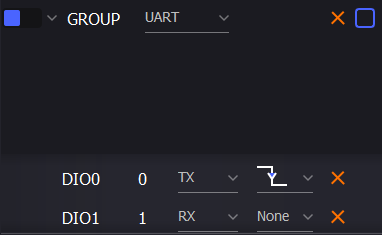 This example verifies the receive/transmit operations of the software application developed for EVAL-ADICUP3029. The data will be transmitted from the Pattern Generator, and visualized on Logic Analyzer, by connecting ADALM2000 to the UART pins of the EVAL-ADICUP3029 board (see Hardware Configuration step).

Set the Time Base of the Logic Analyzer instrument to 30us and the Trigger Position at 90us and run a Single sweep. 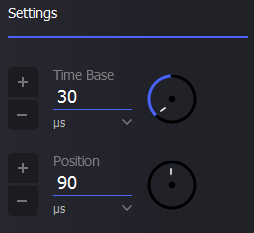 The Logic Analyzer will wait for the falling edge of the Rx signal to be triggered (corresponding to the start bit).

Run a single sweep on the Pattern Generator to send the first UART byte.

The result captured by the Logic Analyzer is presented in Figure 10.

Analyzing the plot, the byte (ASCII code) corresponding to character “A” is sent from the Pattern Generator and received at the EVAL-ADICUP3029 Rx pin. After the byte is received, on TX pin the byte is sent back and captured by the Logic Analyzer.

Now, let's try sending multiple characters and see what happens with our application.

In the Pattern Generator instrument, under the “Data to Send” label, set the data bytes to “ADI”.

Run Single sweep in The Logic Analyzer and then in the Pattern Generator.

The result captured by the Logic Analyzer is shown in Figure 12.

In addition to UART, the application includes a set of decoders covering a large number of communication protocols such as I2C, I2S, SPI, JTAG, and others, making ADALM2000 a powerful tool for analyzing and debugging digital signals.