Most operational amplifier or op-amp circuits have a fixed level of gain. However it is often useful to be able to vary the gain. This can be done simply by using a potentiometer on the output of a fixed gain op-amp circuit, but sometimes it may be more useful to vary the actual gain of the amplifier circuit itself.

A variable-gain or voltage-controlled amplifier is an electronic amplifier that varies its gain depending on a control voltage. This type of circuit has many applications, including audio level compression, synthesizers and amplitude modulation. It can be realized by first creating a voltage-controlled resistor, which is used to set the amplifier gain. The voltage-controlled resistor is one of the numerous interesting circuit elements that can be produced by using a transistor with simple biasing. Another approach is to use potentiometers to vary the value of the resistors that set the gain of the amplifier. 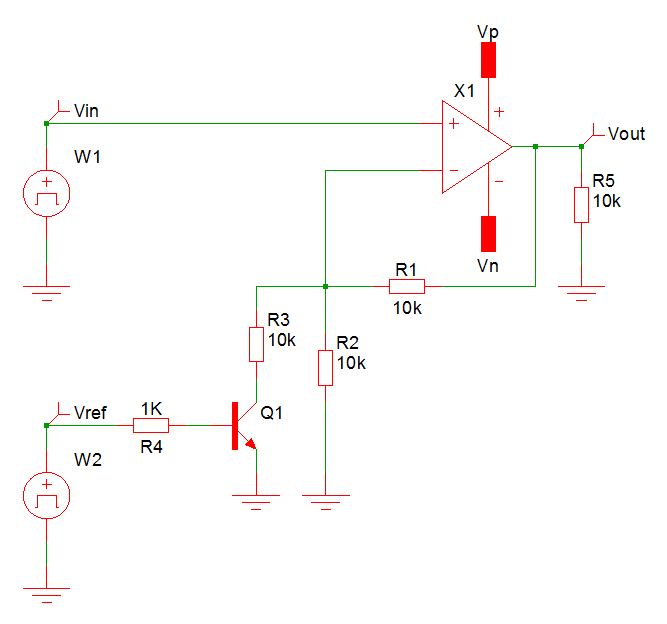 The configuration of the circuit is similar to a basic non-inverting amplifier. The only addition consists of a transistor and a resistor in parallel with resistor R2. The transistor works as a switch that allows 2 gain settings, based on its current state (on/off).

Use the first waveform generator as source Vin to provide a 2V amplitude, 1 kHz sine wave excitation to the circuit. Use the second waveform generator for controlling the transistor, providing a 2V amplitude, 1Hz square wave excitation. Supply the op amp to +/- 5V from the power supply. Configure the scope so that the input signal is displayed on channel 1 and the output signal is displayed on channel 2.

An animated plot is presented in Figure 3.

The output signal varies between two values, determined by the two gain settings, based on the state of the controlled transistor.