The objective of this Lab activity is to examine the structure and operation of the Silicon Controlled Rectifier or SCR. SCRs are mainly used in devices where the control of high power, possibly at high voltage, is needed. The ability to switch large currents on and off makes the SCR suitable for use in medium to high-voltage AC power control applications, such as lamp dimming, regulators and motor control. In addition, unintentional SCRs can form in integrated circuits and when these SCRs get triggered circuit malfunction or even reliability problems and damage can result.

A silicon controlled rectifier (SCR) is a four-layer solid state current controlling device with 3 terminals. They have anode and cathode terminals like a conventional diode and a third control terminal, referred to as the Gate. SCRs are unidirectional devices, i.e. they conduct current only in one direction like a diode or rectifier. SCRs are triggered only by currents going into the gate. The SCR combines the rectifying features of diodes and the On - Off control features of transistors.

An observation to note about this positive feedback loop is that it will hold the SCR ON and remain in this latched state as long as the following is true:

The voltage drop across the SCR from terminal A to K when the SCR is conducting is the sum of Q1VBE and Q2VCESAT in parallel with the sum of Q2VBE and Q1VCESAT . We know that the ß of BJT devices falls as the collector base junction is forward biased into the saturation region i.e VCE less than VBE. The VCE of the two transistors will drop until the above positive feedback gain equation is satisfied and ßPNP * ßNPN is equal to 1.

It is also important to note that the ß of BJT transistors is very low for very small values of collector current and from the above equation, the SCR will remain in the OFF state so long as the leakage current is so small that ßPNP * ßNPN is less than 1 at this low leakage current level.

The ADALP2000 Analog Parts Kit does not include an SCR but we can emulate one by building the equivalent circuit shown in figure 1© from discrete PNP and NPN transistors.

Build the model of the equivalent circuit of an SCR as shown in figure 2 on your solder-less breadboard. 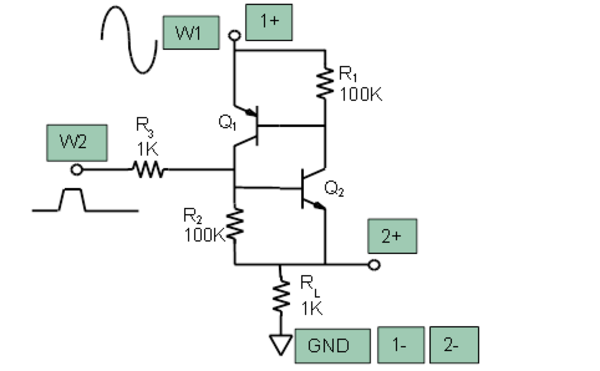 Figure 2 Circuit to emulate an SCR

The two 100 KΩ resistors, R1, R2, are placed across the respective VBE of each transistor to insure that any small leakage currents do not self trigger the simulated SCR. Resistor R3 converts the voltage pulse from AWG2 into a triggering current.

Figure 3 Breadboard connections of Circuit to emulate an SCR

Trigger the scope on channel 1. While observing the input sine wave on scope channel 1 and the voltage across RL on scope channel 2, adjust the phase of AWG2 in steps from 180º to 360º. Depending on the phase setting of AWG2 you should see something that looks similar to the figures below. You will notice that the voltage across RL is zero, SCR in OFF state, until the trigger pulse from AWG2 occurs and the SCR remains in the ON state until the input sine wave voltage crosses zero. 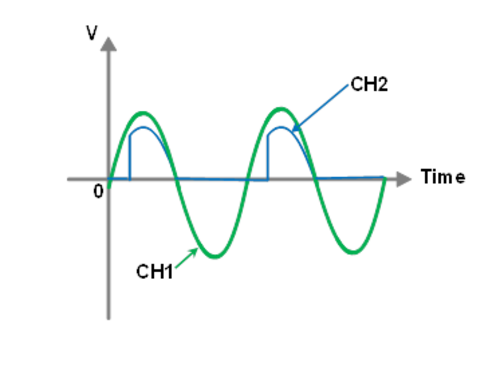 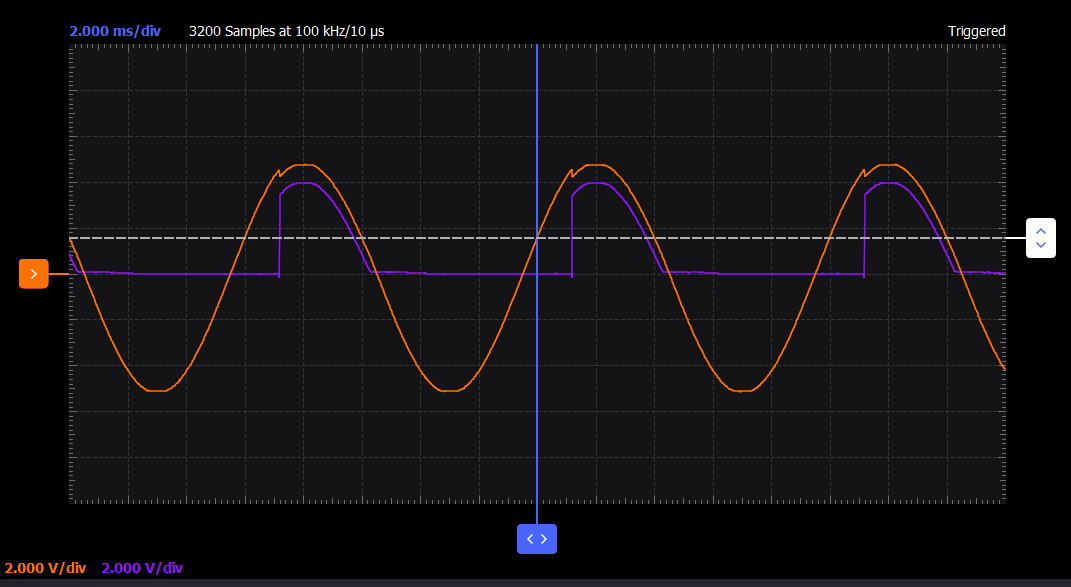 Measure and report the voltage drop across the SCR when it is in the ON state and conducting current. How does this voltage compare to a conventional PN junction diode?

Find the minimum pulse voltage ( amplitude ) above ground that will trigger the SCR by adjusting AWG2. Estimate the minimum trigger current based on this voltage, R3 and the VBE of Q2. Explain your result.

Replace resistor R3 with a 0.1uF capacitor. This coupling capacitor acts as a differentiator turning the square pulse of the AWG output into narrow positive and negative spikes of current on the rising and falling edges of the square wave. How does this effect when and how the SCR is triggered?

If a source of smaller ( low current ) SCRs is available, you could repeat the experiment with an actual device rather than our equivalent circuit emulation.

We have explored applications for the SCR that intentionally make use of its characteristics. Unfortunately, unintentional SCRs can form in integrated circuits and if these parasitic SCRs get triggered circuit malfunction can result or even reliability issues and damage to the integrated circuit.

Latch-up is a potentially destructive situation in which a parasitic SCR is triggered, shorting the positive and negative supplies together. If current flow is not limited, electrical over-stress will occur. The classic case of latch-up occurs in CMOS output devices, in which the driver transistors and wells form a four layer PNPN SCR structure when one of the two parasitic base-emitter junctions is momentarily forward biased during an over-voltage upset event. The SCR turns on and essentially causes a short between the VDD power supply and ground.

Since all these MOS devices are located close together on the monolithic die, with appropriate external excitation, the parasitic SCR devices may turn on, a behavior common with poorly designed CMOS circuits. Figure 4 illustrates a simplified cross section showing two transistors, one PMOS and one NMOS; these could be connected together as logic gates or as an analog amplifier or switch. The parasitic bipolar transistors responsible for latch-up behavior, Q1 (vertical PNP) and Q2 (lateral NPN) are as indicated.

Figure 6 Cross-section of PMOS and NMOS devices, with parasitic transistors Q1 and Q2

Proper design methods to reduce the possibility of SCR formation include increasing the spacing between NMOS and PMOS devices and interposing highly doped regions between and around Nwells and Pwells. Both of these kinds of layout approaches attempt to lower the ß of either the vertical PNP or the lateral NPN parasitic bipolar transistors to less than 1. Some of these methods also tend to lower the resistance of RPWELL and RNWELL which increases the minimum trigger current needed to turn on the SCR.

The Programmable unijunction transistor or PUT is a close relative of other four layer devices in the thyristor family. Its has a four layered construction just like the SCR and has three terminals named anode(A), cathode(K) and gate(G) again like the thyristors. Background and example circuits that use the PUT can be found in this ADALM1000 Lab Activity.