The objective of this Lab activity is to explore the use of a piezoelectric device as way to harvest energy by the conversion of mechanical energy to electrical energy through the bending of such a device.

Energy harvesting (sometimes also called power harvesting or energy scavenging) is the process by which energy is gathered from an external source (for example kinetic or mechanical energy), converted, and stored for small low energy consumption devices, like those used in wearable electronics and wireless sensor networks.

The piezoelectric transducer, LDT0 supplied in the ADALP2000 Analog Parts Kit is a flexible film device laminated to a polymer substrate. Two crimped contacts for mounting and electrical connections are provided. When the device is bent or displaced from its neutral position, a very high strain is generated in the piezo-polymer and a high voltage is generated. As a vibration sensor the LDT0 has a sensitivity of 50 mV/g. An electrical model of a typical piezoelectric device is shown in figure 1. 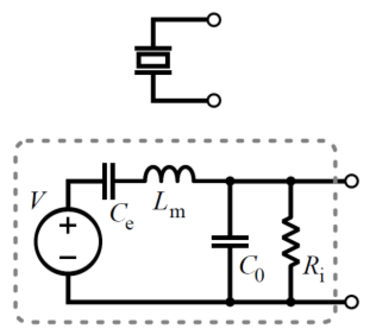 A piezoelectric transducer has very high DC internal impedance, Ri and can be modeled as a proportional voltage source, V and filter network. The voltage produced is directly proportional to the applied force, pressure, or strain. The output signal is then related to this mechanical force as if it had passed through the equivalent circuit. For our purposes as an energy harvester where we will be converting the AC voltage generated by the movement or vibrations to a DC voltage, we can ignore the filtering effects. 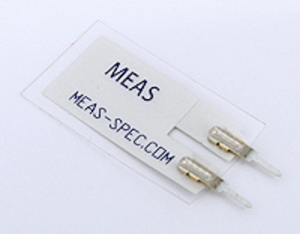 Build the energy harvesting circuit shown in figure 2 on your solder-less breadboard. Be sure to leave enough room around the LDT0 piezoelectric transducer so that it can be easily flicked back and forth with your finger.

Connect the ADALM2000 hardware as indicated by the green boxes. Set both scope channels to 1V/div. With the horizontal time base set to 200mS/Div and trigger set to none, rapidly flick the transducer back and forth with your finger. Observe the voltage waveform across the transducer on channel 1 and the rectified and filtered DC voltage on channel 2. What you observe should look much like the screen shot shown in figure 3. The channel 1 waveform in orange shows the vibrating waveform produced by the transducer as it is flicked back and forth. The channel 2 waveform in blue shows the DC voltage charging up from zero volts to higher voltages each time the transducer vibrates.

The energy stored in the capacitors is equal to:

Much like we saw with the loading effect of scope channel 1 on the output voltage of the transducer, scope channel 2 will load the DC output voltage as well. An input resistance of even 1 megaOhm will draw 1 uA of current with 1 volt across it. To further reduce this loading design and build a unity gain buffer utilizing an op amp with very high input impedance, i.e. very low input bias current. Hint, this generally requires a FET input op amp but even amplifiers with as much as 10 nA of input bias current would be a factor of 100 times better than the Scope input. After building the buffer re-measure the peak DC voltage you can get from the transducer.