The objective of this activity is to investigate the use of the zero gain concept to produce an output current which is stabilized (less sensitive) to variations of the input current level.

The breadboard connections are as shown in figure 1 below. The output of waveform generator W1 drives one end of resistor R1. Resistors R1, R2 and transistor M1 are connected as in previous zero gain amplifier section. Since the VGS of M2 is always smaller than the VGS of Q1, you should, if possible, select M1 and M2 from your inventory of devices such that (at the same drain current) M2's VGS is less than M1's VGS. The gate of transistor M2 is connected to the zero gain output at the drain of M1. R3, connected between the Vp supply and the drain of M2, is used along with the 2+ (Single Ended) scope input to measure the drain current.

The waveform generator should be configured for a 1 KHz triangle wave with 4 volt amplitude peak-to-peak and 2V offset. The input of scope channel 2 (2+) is used to measure the stabilized output current at the drain of M2.

The zero gain amplifier can be used to create a stabilized current source. Because the voltage seen at the drain of transistor M1 is now more constant with changes in the input supply voltage as represented by AWG1, it can be used as the gate voltage of M2 to produce a much more constant current in transistor M2. 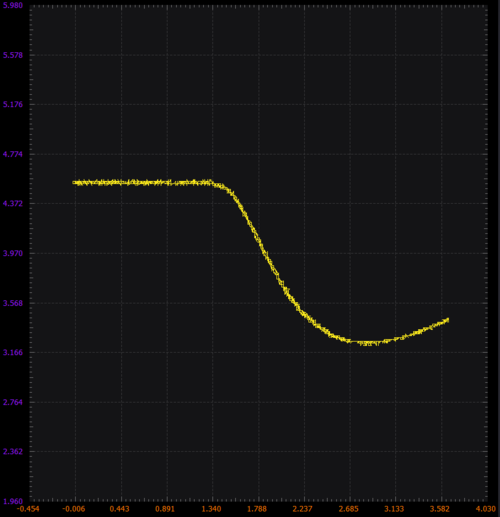 This circuit is sometimes referred to as a peaking current source. Why do you think?

Based on the delta VGS of M1 and M2, at what input and output current would the gain be zero for different values of R2?

An exercise for the reader is to plot the “stabilized” output current for all the various combinations of M1 and M2 from the available inventory of transistors. Why does it vary and by how much? The output of the simple peaking current source is always less than the input current at the peak by a substantial fraction. What is that fraction and why?

How can the circuit be changed to make the output a larger fraction of, or even equal to or larger than, the input?

The output current has a narrow peak. How could multiple copies of the peaking current source be combined to produce a much wider, flatter peak?