The objective of this lab activity is to investigate the characteristic of an oscillator which produces a pulsed output ( short burst of cycles ) which is gated by an input square wave.

A sinusoidal (sine-wave) oscillator is will produce an output waveform at a predetermined frequency for an indefinite period of time; that is, it operates continuously. Many electronic circuits in equipment such as radar require that an oscillator be turned on for a specific period of time and that it remain in an off condition until required at a later time. These circuits are referred to as Pulsed Oscillators or Ringing Oscillators. They are nothing more than sine-wave oscillators that are turned on and off at specific times. Figure 1 shows the circuit diagram of a pulsed oscillator with the resonant tank in the emitter circuit. A positive input on VGate makes Q1 conduct heavily and current flows through L1; therefore no oscillations can take place. A negative-going input pulse (referred to as a gate) cuts off Q1, and the tank oscillates or rings until the gate input ends or until the ringing dies out or stops, whichever comes first. 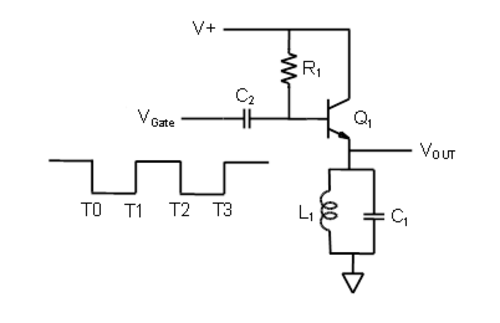 To see how this circuit operates, assume that the Q of the LC tank circuit is high enough to prevent damping. An output from the circuit is obtained when the input gate goes negative (T0 to T1 and T2 to T3). The remainder of the time (T1 to T2) the transistor conducts heavily and there is no output from the circuit. The width of the input gate controls the duration of the output signal. Making the gate wider causes the output to oscillate or ring for a longer time.

The resonate frequency of the LC tank is given by:

You probably have noticed by now that feedback has not been mentioned in this discussion. Remember that positive feedback was a requirement for an oscillator to sustain oscillation. In the case of the pulsed oscillator, oscillations are only produced for a very short period of time. Note, however, that as the width of the input gate (which cuts off the transistor) is increased, the amplitude of the sine wave begins to decrease (dampen) near the end of the gate period because of the lack of feedback. If a long period of oscillation is required for a particular application, an oscillator circuit with feedback will be needed. The principle of operation remains the same except that the feedback network sustains the oscillation period for the desired amount of time.

Build the pulsed oscillator circuit shown in figure 2 on your solder-less breadboard. The green squares indicate where to connect the ADALM2000 module AWG, scope channels and power supply. Be sure to only turn on the power supplies after you double check your wiring. 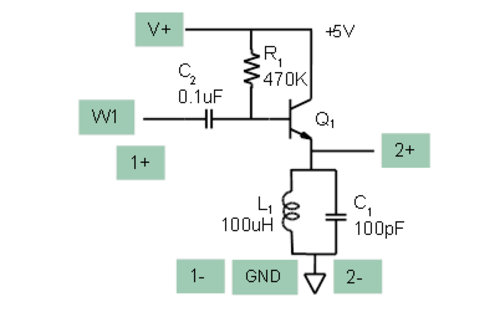 Setup AWG1 as a square wave with 1.4V amplitude peak-to-peak and zero offset. Set the frequency to 50 KHz and the duty cycle to 50% ( square wave high for 50% of the period ). Set both scope inputs to 500 mV/div and the time base to 2 uSec/div. Set the trigger on the falling edge of channel 1.

Turn on the +5V power supply and start the AWG. Observe the output waveform. It should consist of a burst of a few cycles of sinewave starting at the falling edge of the AWG 1 square wave and ending on the rising edge. 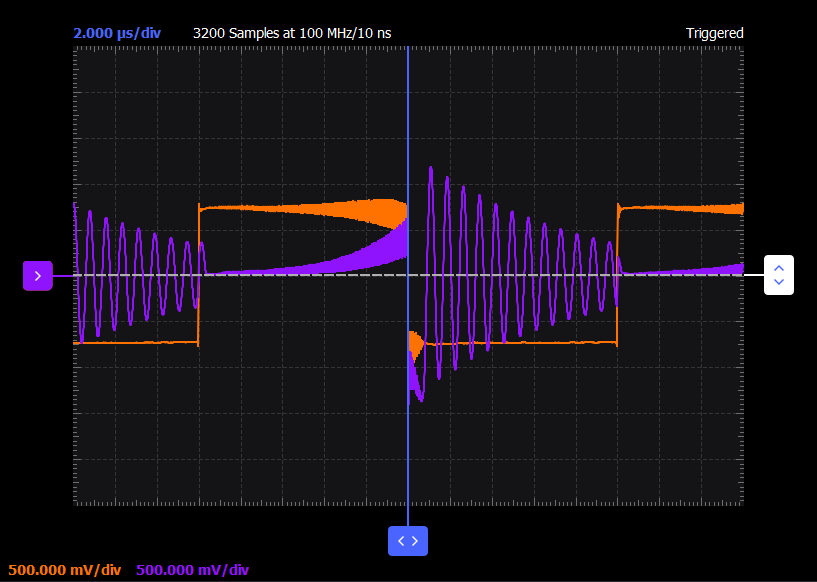 How does the measured output sinewave frequency compare to what you calculate using the formula for an LC tank and the values for L and C you used? Does the amount of dampening of the output amplitude make sense based on the internal DC resistance of the inductor you used? If not what other factors might contribute to the dampening?