This activity will explore the most important electrical and physical characteristics of common chemical batteries.

We have said that an ideal voltage source will produce a constant output voltage independent of the current supplied to the load, i.e. whatever current is needed to maintain the voltage at a constant value. However, real world voltage sources can only supply current up to some limit. The power supplies built into the ADALM1000 hardware, for example, use active circuitry to maintain the output voltage at a constant value but only for load currents of +/- 200 mA. This is a relatively small current because the board is powered from the computer USB port. Bench top laboratory supplies, powered from the wall socket, can supply much more, often many amps. Similarly, batteries store a finite amount of energy and have a limited current capability depending on the size of the battery. As the current increases the output voltage will begin to drop as the chemical reaction in the battery tries to maintain the current. In most cases this drop in output voltage with increasing load current can be accurately modeled by including a resistor, typically a few ohms at the most, in series with an ideal voltage source, as shown in figure 1. This is the “internal” resistance of the battery, Rint. This simple model isn’t perfect, because as the battery discharges its voltage will drop even without significant loading. But the internal resistance model does capture the characteristics at a given state of battery charge. Since this simple model is the same as a Thévenine equivalent, we can characterize it in the same way, by measuring the open-circuit voltage and “short-circuit” current (not actually shorted but using a known load resistance). We do not want to damage the battery, so a current limiting resistor is added in series with the battery as shown in figure 2. When the output is “short-circuited”, this resistor limits the maximum current that will flow. 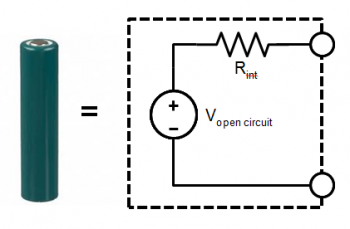 You will need one or more batteries (AA or AAA) and a holder for them. Insert the batteries in the holder and add an external 100 Ω resistance in series with the battery as shown in figure 2. Open the Meter – Source tool, figure 3. Turn on Source A with CA-V set for 1.5 nominal for the case of a single cell. For two cells in series adjust the Value such that it is nominally the total battery voltage. Measure the open-circuit voltage (when current through the 100 ohm resistor is zero as measured by CA mA) and the drop in voltage across the battery ( CA-V setting ) while measuring the current (CA mA ) and the voltage across the cell, CB V. Calculate the internal Thevenin equivalent resistance based on the change in the cell voltage and the current. Note that if the holder contains two cells in series, your answer will be twice the internal resistance of a single cell. 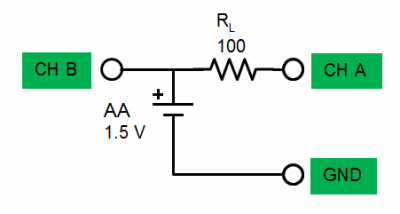 3. Now place a 470 Ω resistor across the terminals of the batteries, and record the voltage. In your lab report, discuss whether your measurement is reasonably well predicted by the internal resistance model for the battery.

A lemon battery is a simple battery often made for the purpose of educational experimentation. Typically, a piece of zinc metal (such as a galvanized nail or screw) and a piece of copper (such as a penny or copper wire) are inserted into a lemon and connected by wires. The typical voltage produced by a lemon battery can be between 0.5 and 0.9 Volts. The energy generated by reaction of the metals can used to power a small device such as a light emitting diode (LED) when enough cells are connected in series.

Insert a copper penny into a small cut or push a copper nail or heavy gauge wire into one side of the lemon. Push a galvanized (zinc coated) screw or nail into the other side of the lemon. The zinc and copper electrodes must not touch. This will be a single cell of a battery. The zinc and the copper are called electrodes. The lemon juice is called electrolyte. All batteries have a “+” and “-” terminal. Electric current is a flow of atomic particles called electrons.

Measure the voltage of your single cell using one of the ALM1000 input channels in Hi-Z mode (as a voltmeter). This will not be enough to light an LED. You would probably need at least 3 or 4 lemon cells connected in series to generate enough voltage to light an LED, figure 4.

The quality of the copper and zinc can be a problem for a battery like this. Try substituting a length of 14 or 12 gauge copper wire (common house wire) for the penny. Experiment with different lengths and configurations of electrodes. Other sources of zinc and copper may be found in the plumbing and electrical departments of a hardware store.

Other fruits and vegetables like oranges, grapefruits and potatoes will work as well. Basically anything that contains a mild acid. Try other household items to see how much voltage and current they can produce.

For experimenters who finish early or want an extra challenge, obtain a photovoltaic (solar) cell from your parts supply room for experimentation. A solar cell is a “real” power source like a battery in the sense that the output current is limited, although of course the output current also depends on the intensity of the light falling on it. Under well-lit conditions, characterize the open-circuit output voltage and the short-circuit current. Then, using various resistors or a potentiometer as a variable load, characterize the output current vs. output voltage characteristic for the solar cell, and export a plot of this characteristic for your report. If you were going to use this cell in an application, what voltage level should you expect for a 10 mA load current?