In this lab activity the concept of pulse width modulation is explored. Pulse width modulation is used in a variety of applications including sophisticated power control circuitry. PWM will be used to adjust the brightness of an LED. Simple RC low pass filtering techniques will be investigated as a way to produce a “DC” average output from the PWM signals.

Pulse width modulation (PWM), is a method of adjusting the average power delivered by an electrical signal, by effectively chopping it up into discrete parts. The average value of voltage (and current) fed to the load is controlled by turning the switch between supply and load on and off at a fast rate. The longer the switch is on compared to the off periods (so called duty cycle), the higher the total power delivered to the load.

Rather than adjust a constant voltage (or current) to an LED circuit, we will change the voltage applied to the LED using pulse width modulation (PWM). This method has some significant advantages over the constant voltage method.

For additional background, read the online tutorials on pulse width modulation listed in the “For Further Reading” section at the end of this Activity. Do not expect to understand everything. Rather, focus on the main idea, that the duty cycle translates to signal average. 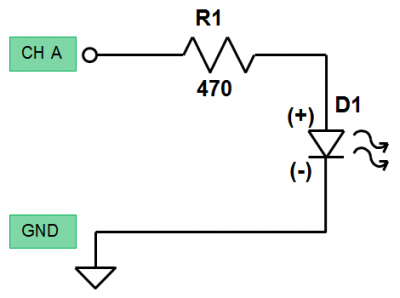 Set up the CH A waveform generator in SVMI mode and so that it produces a square shape waveform at a frequency of 2 Hz, with Max voltage = 5V and Min voltage = 0V. That is, the pulses go from 0 to 5 V. Be sure that the Sync AWG box is not checked. The waveform generator window should look like the one in figure 2. The AWG CH B settings do not matter except that it should be in Hi-Z mode. 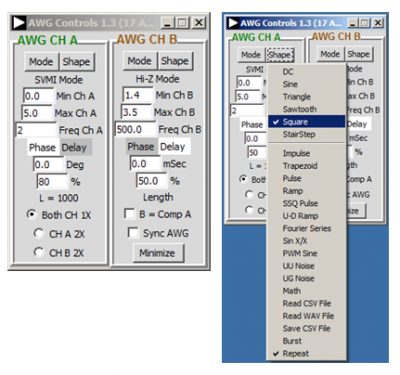 Note the entry box next to the “%”. This will allow you to adjust the duty cycle. Vary the duty cycle throughout its range from 0% to 100% in steps of 10% and describe what you observe.

Record the measurement for each duty cycle setting in your lab report.

Finally, at 50% duty cycle, lower the frequency of the square wave until you can just start to see the LED flash. Observe the LED both directly and to the side using your peripheral vision. Record the value of the highest frequency that you are able to sense flashing looking in both directions. Are they the same? How does this frequency relate to the refresh rate of televisions and computer monitors?

In this part of the activity you will use a simple RC low pass filter to measure the apparent “DC” average of a PWM signal. Configure the circuit on your solderless as shown in figure 3. 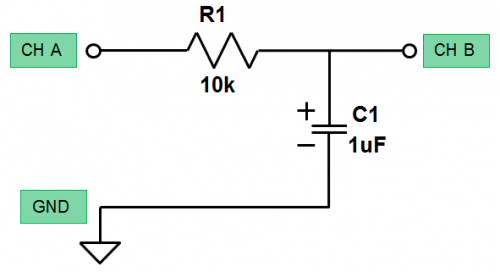 The nominal voltage observed at the output of the low-pass filter is determined by just two parameters, the duty cycle and the PWM signal's low and high voltages which can be thought of as the peak-to-peak amplitude plus a DC offset. The relationship between duty cycle, amplitude, offset and the filtered output voltage is fairly intuitive. In the frequency domain, a low-pass filter removes (suppresses) higher-frequency components of an input signal. The time-domain equivalent of this effect is smoothing, or averaging, thus, by low-pass filtering a PWM signal we are extracting its average value. Let's assume the duty cycle is 50% and our PWM signal low and high voltage is 0 and 5. You can probably guess what the nominal output of the filter will be: 2.5 V, because the signal spends half of its time at 0 V and half at 5 V, and thus the smoothed-out version will end up right in the middle.

Start with the Min and Max values of 0 and 5, a frequency of 100 Hz and 50% duty cycle. Select the CB-V trace from the Curves menu. Add the average channel B voltage by displaying the Avg value under Meas CB. The filter does not remove all the high frequency parts of the PWM signal so the residual frequency part is call e the ripple. To measure the ripple, add the P-P measurement for CB as well.

One of the built-in arbitrary waveforms in ALICE is a pulse width modulated sine wave. From the AWG CH A Shapes drop down, select the PWM Sine shape (figure 4). The Min and Max entries set the low and high voltages as with the simple square wave. The Freq entry sets the frequency of the sine wave. What was the duty cycle entry now sets the width of the PWM signal (should now be labeled PWidth). The number entered sets the number of master clock (100KSPS) samples per pulse, X 100. This effectively sets the PWM carrier frequency. 50 is a good place to start.

Click on the green Run button to start the AWG generator and describe what you see as you observe the PWM signal in the channel A trace and the filtered output in the channel B trace. You may need to adjust the Horizontal time/Div settings to display a couple of cycles of the sine wave. You should see something like figure 5. 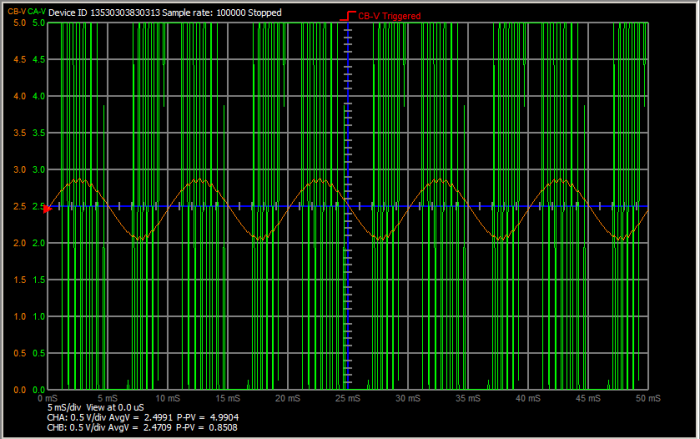 Try increasing and decreasing the number of samples per pulse effectively changing the PWM frequency.
How does the filtered output change?

Most of flameless LED candles are quite simple circuits. They consist of nothing more than an on/off switch, a 3V coin cell battery and the special flickering LED. The flickering effect is produced by an integrated pulse width modulation (PWM) circuit, inside the special LED as shown in figure 6. These flickering LEDs are a perfect way to demonstrate PWM in action both visually and with the ADALM1000 scope.

Figure 6, inside a flickering LED

After extracting the LED from the plastic candle housing insert the LED in your solder-less breadboard along with a 220 Ω current limiting resistor as shown in figure 7. Each time that the LED circuit turns on, current is drawn from the power supply, channel A set to DC 5 V, and through the 220 Ω resistor R1 to ground. To observe the voltage across R1 we can connect scope channel B, in Hi-Z mode to the resistor as shown. 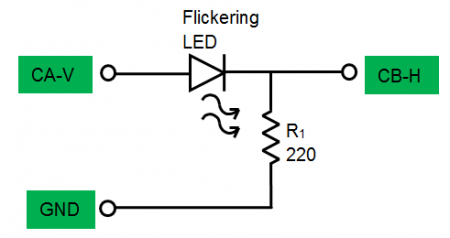 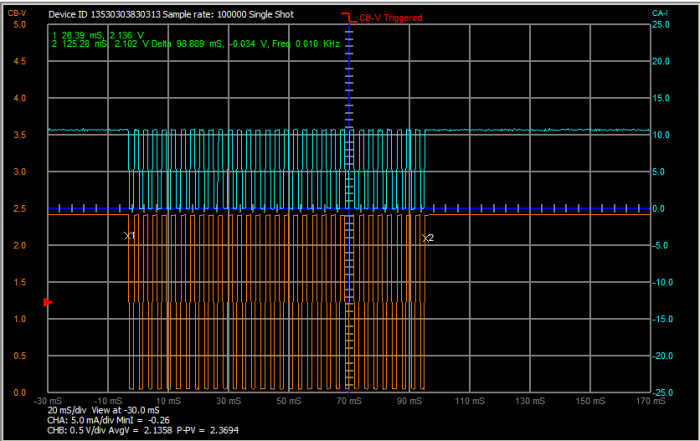 From this screen shot we can see one of the PWM bursts. It is 32 pulses long for a total of about 100 mS or 10 Hz. So it is possible for the duty cycle to change every 100 mS and the LED will seem to flicker at 10 Hz. 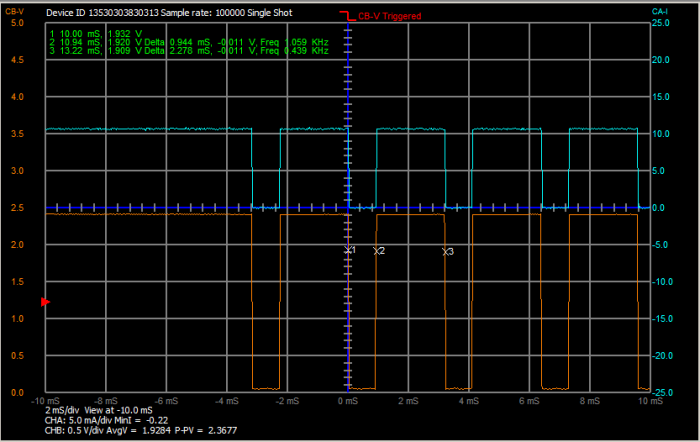 Figure 9, Beginning of a burst

The end of a different burst shown in figure 10 has a lower duty cycle but the same 310 Hz frequency. 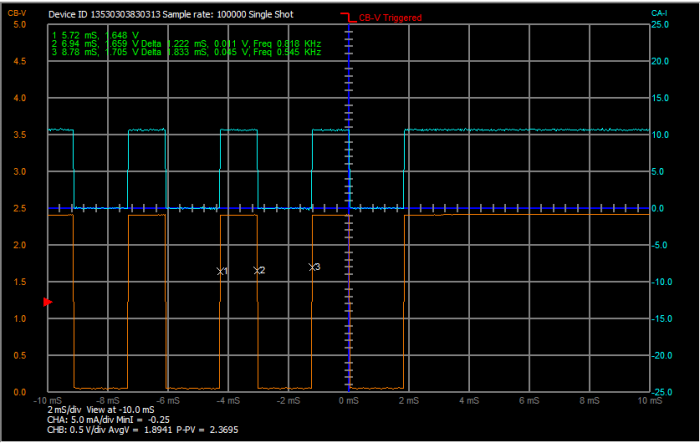 Figure 11 is another close up screen shot showing the chip transitioning from one pulse width to another. We can also see that the frequency (310 Hz) does not change as the pulse width changes. 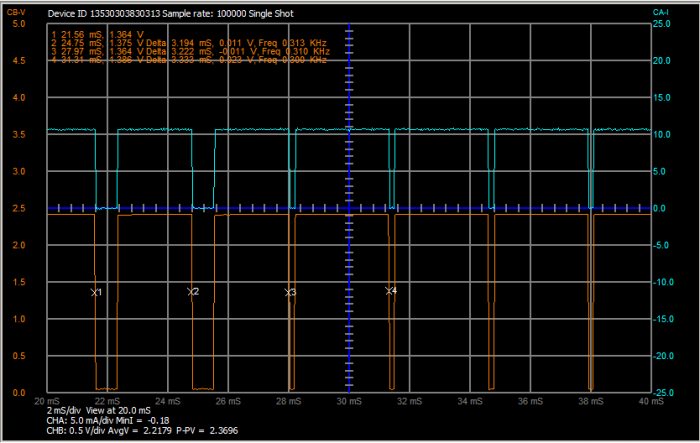 Another way to observe, hear actually, the PWM signal is to replace the 220 Ω R1 with the series connected combination of a 100 Ω resistor and the speaker from the ALP2000 parts kit.

Not very musical but still interesting.

Another thing you can do is make another normal LED flicker in sync with the special LED. Connect a regular Red LED from the kit in series with the flicker LED as shown in figure 12. Be sure to note the proper polarity for the second LED. A lower value resistor will be needed because of the larger total voltage drop of the series combination of the two LEDs.

Why does the second LED flicker as well?
Does it matter what order the LEDs and resistor are connected?