Activity: What is Polarity and Why do we care?

A polarized component, a part with polarity, can only be connected in a circuit in one direction. That is to say that the more positive terminal voltage and more negative terminal voltage can only be connected to the proper terminals. Also the current in the terminal will only flow generally in one direction. Polarity is generally indicated by using positive (+) and negative (-) signs on schematics and marking on the actual components themselves. Other markings and pin designations can be used as well to distinguish which pin or terminal is which.

Polarity is a very important concept in electronics, especially when physically constructing circuits. Whether you are plugging parts into a breadboard, soldering them to a PCB, it’s critical to be able to identify polarized components and to connect them in the proper direction. That is objective of this lab activity. We will discuss which components do and do not have polarity, how to identify component polarity, and how to test some components for polarity.

So called passive components like resistors, capacitors and inductors are generally not polarized. There are of course exceptions to that rule.

Not all capacitors are polarized, but when they are, it’s very important not to mix up their polarity.

Ceramic capacitors – the small (typicaly 1µF and less), commonly blue or yellow colored ceramic bodies – are not polarized. You can connect those either way in the circuit. 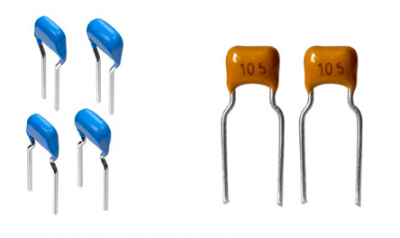 Ceramic caps are NOT polarized.

Through-hole and SMD 0.1µF ceramic capacitors. These are NOT polarized.

Electrolytic capacitors (they contain electrolytes), which look like little tin cans, are polarized. The negative pin of the capacitor is usually indicated by a (-) marking, and/or a colored strip along the can. They might also have a longer positive leg. Below is an electrolytic capacitor which has a dash symbol to mark the negative leg, as well as a longer positive leg and a tantalum capacitor. 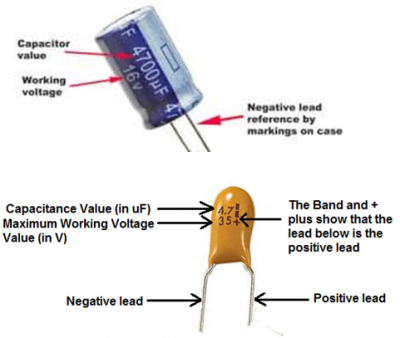 Applying a negative voltage for an extended period to a polarized electrolytic or tantalum capacitor will result in a briefly exciting, but catastrophic, failure. They’ll make a pop, and the top of the cap will either swell or burst open. Tantalum capacitors can even catch on fire. From then on the cap will be as good as dead, acting like a short circuit.

Getting polarity right in your circuit starts and ends with getting the power supply connected correctly. Whether your project is getting power from a wall powered supply, a battery or even the ADALM1000, it is critical to make sure you do not accidently connect the positive and negative terminals backwards and effectively apply -9V or -5V to your circuit by accident.

Anyone that has ever replaced batteries knows how to find their polarity. Most batteries will indicate the positive and negative terminals with a “+” or “-” symbol. Other indicators of polarity might be the color of the wires, red for positive and black for negative. 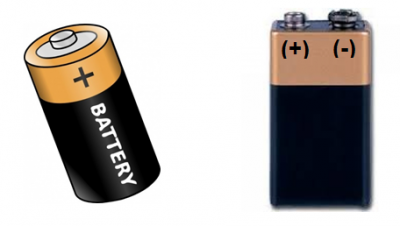 All batteries should have some way to identify polarity

All batteries. Lithium polymer, coin cell, 9V alkaline, AA alkaline, and AA NiMH have some way to represent the positive and negative terminals.

Power supplies usually have a standardized connector, which should usually have polarity itself. A barrel jack, for example, has two conductors: outer and inner; the inner/center conductor is usually the positive terminal. Other connectors, have keys so you they cannot be inserted backwards.

For extra protection against reversing power supply polarity, you can add reverse polarity protection using a diode, or a MOSFET.

Current through a diode can only flow from the anode to the cathode, which would explain why it’s important for a diode to be connected in the correct direction. Physically, every diode should have some sort of indication for either the anode or cathode pin. Usually the diode will have a line near the cathode pin, which matches the vertical line in the diode circuit symbol.

LED stands for light-emitting diode, which means that much like other normal diodes, they’ are polarized. There are a handful of identifiers for distinguishing the positive and negative pins on an LED. One is to identify the longer leg, which should indicate the positive, anode pin. Sometimes the leads have been trimmed, try finding the flat edge on the LED’s outer casing. The pin nearest the flat edge will be the negative, cathode pin.

There might be other indicators as well. SMD diodes have a range of anode/cathode identifiers. Sometimes it’s easiest to just use a multi-meter to test for polarity. Turn the multi-meter to the diode setting (usually indicated by a diode symbol), and touch each probe to one of the LED terminals. If the LED lights up, the positive probe is touching the anode, and the negative probe is touching the cathode. If it doesn’t light up, try swapping the probes around. Some LEDs like Blue or White LEDs with higher forward voltages will not light in either direction using the diode test function on a multi-meter.

The polarity of an LED can be tested with a digital multimeter. If the positive lead touches the anode and negative touches the cathode, the LED should light up. The ALICE Desktop Ohmmeter tool can be used to test diodes and LEDs as well as measure resistors. Connect the positive end of the diode to CH A and the negative end to CH B. 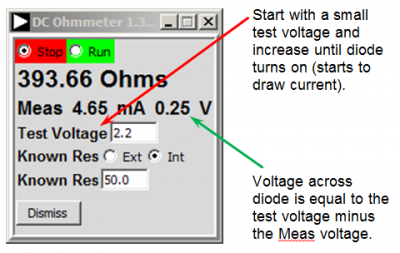 Diodes certainly aren’t the only polarized component. There are tons of parts out there that won’t work if connected incorrectly. Next we’ll discuss some of the other common polarized components, beginning with integrated circuits.

These (traditionally) three-terminal, polarized components are lumped together because they share similar package types. Through-hole transistors, MOSFETs, and voltage regulators commonly come in a TO-92 or TO-220 package, seen below. To find which pin is which, look for the flat edge on the TO-92 package or the metal heatsink on the TO-220, and match that up to the pin-out in the datasheet.

This is just the tip of the polarized-component iceberg. Even non-polarized components, like resistors, can come in multi-lead packages. A resistor pack – a grouping of five-or-so pre-arranged resistors – is one such example.

A SIP resistor pack, is an array of five 330Ω resistors, all tied together at one end. The dot represents the first, common pin. The resistors in side are not individually “polarized” but the common connection makes the overall array non-symetric.

Fortunately, every polarized component should have some way to inform you which pin is which. Be sure to always read the datasheets, and check the package or case for dots or other markers.

Now that you know what polarity is, and how to identify it, why not check out some of these related tutorials: