The main objective of this activity is to familiarize you with the lab equipment and learn about the operation of the fundamental combinational logic elements, AND, OR, NAND, and NOR gates. The TA will explain how to use the ADALM1000, solder-less breadboard, and CMOS logic chips.

To become familiar with basic logic gates and logic functions.

The power of the digital logic used to construct digital systems like computers comes from the fundamental simplicity of the binary number systems. Binary digits (called Bits) have only two values (0 and 1) rather than the ten values (0, 1, 2, 3, 4, 5, 6, 7, 8, 9) of decimal numbers. Using binary numbers makes representation of a number very long (number of Bits). Since a computer or other digital hardware is used to keep track, length (number of Bits) does not matter so much.

Our first multiple-input gates is the AND gate, so-called because the output of this gate will be “high” (1) if and only if all inputs (first input and the second input and . . .) are “high” (1). If any of the inputs are “low” (0), the output will be in a “low” (0) state. The two-input AND gate truth table is as shown:

Figure 1, The AND gate

Figure 3, The OR gate

As might be suspected, the NOR gate is an OR gate with its output inverted, just like the NAND gate is an AND gate with an inverted output.

Figure 4, The NOR gate

NOR gates, like all multiple-input gates seen thus far, can be manufactured with more than two inputs. Still, the same logical principle applies: the output goes “low” (0) if any of the inputs are made “high” (1). The output is “high” (1) only when all inputs are “low” (0).

For the activity, find the corresponding IC chips and wire the circuit shown in the following diagrams (figures 10-12) one at a time on your breadboard. The logic gates you need to use are 74HC04 Hex inverter, 74HC08 Quad AND gate, and 74HC32 74HC32 Quad OR gate. The IC package contains 4 individual gates, wire one gate at a time and test the functionality.

Remember to connect the + 5 V power supply to the IC power VDD (usually pin 14) and GND to the ground pin (usually pin 7). Also, remember that more than one output of the gates should never be connected (shorted) together. If you do so, the two outputs will fight each other and may damage the chip.

The ALM1000 has two waveform generator outputs (CH A and CH B) that can be used to provide the two inputs, A and B, to the logic gates you will be testing. Configure the AWG channels as shown in figure 5. The Mode for both channels is set to SVMI Split I/O which produces the voltage waveforms on the CH A and CH B pins while splitting the inputs for the two channels on to the AIN and BIN pins which will be used to measure the logic gate outputs. The Min and Max voltages are set to 0 and 5 to produce the logic low and logic high levels. Be sure that the Sync AWG box is checked. 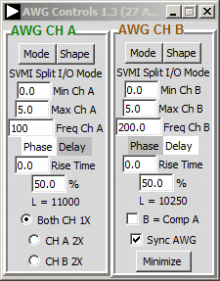 We would like to display both the inputs and outputs of the logic gates on the oscilloscope screen at the same time. The scope inputs, AIN and BIN, can be connected to the gate outputs but we would need two more scope input channels to simultaneously display the two gate inputs (AWG outputs). The software provides a couple of “Math” traces that can be used to display the waveform data being sent to the AWG channels. This will be the same as if the actual output voltage was measured. From the Curves drop down menus select CA-V, CB-V, Math-X and Math-Y.

We now need to tell the software what data we want to appear in the Math traces. The AWG A and AWG B waveform data points are contained in two arrays, AWGAwaveform[] and AWGBwaveform[]. Click on the Math button to open the Math formula control window as shown in figure 8. 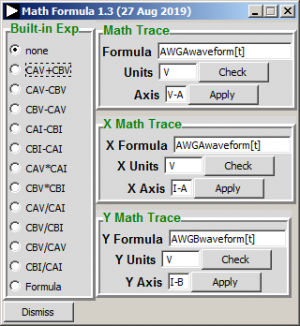 Enter AWGAwaveform[t] and AWGBwaveform[t] into the X and Y Math Trace Formula entry locations respectively. The Units for both should be V (for volts) of course. We need to choose a set of vertical axis controls for the traces as well. Enter I-A for X and I-B for Y. Click on Apply buttons to apply your entries. You can use the Check buttons to make sure there are no typos in the formula you entered.

To better display the four traces on the scope grid so they are not all on top of each other we can use the vertical range and position settings to arrange then at different locations on the grid. Set the V/Div for all four traces to 5 (the traces will be one vertical division tall). Set the Pos controls as shown in figure 9 to stagger the traces vertically. 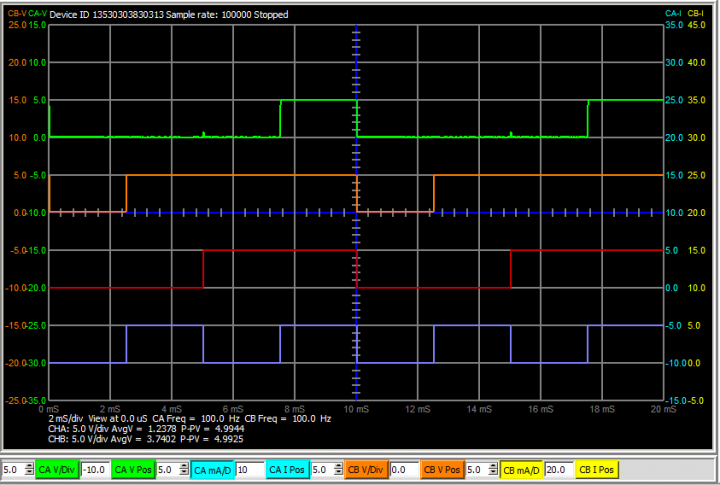 One chip at a time

Plug in the 74HC08 and 74HC32 chip and connect one of the four gates at a time as shown the following figures. Connect the A and B inputs of one of the gates to the CH A and CH B pin, and the output to the AIN or BIN pins. Record your observations (scope traces and resulting Truth Table) in your lab report. 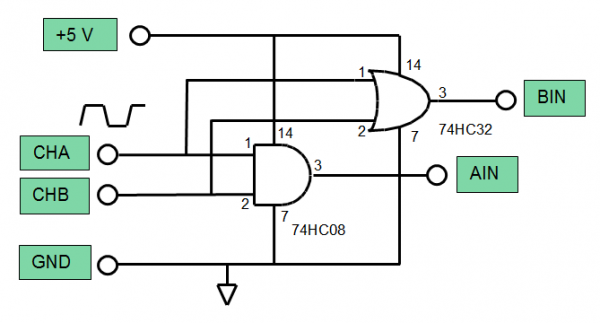 Figure 10, AND and OR logic function

Figure 11, NAND and NOR logic function

Inverting the inputs of the AND gate provides the Negative AND function. Similarly, inverting the inputs of the OR gate provides the Negative OR function. Contrary to your first instinct, the logical behavior of a Negative-AND gate is not the same as a NAND gate. Its truth table, actually, is identical to a NOR gate. The behavior and truth table of a Negative-OR gate is the same as for a NAND gate.

Figure 12, Negative AND and Negative OR logic function

1. Which pairs of gates have inverting relations according to the truth table?

2. Write an algebraic equation for each type of gate using the inputs A and B (refer to the datasheet pin-outs, or textbook, or ask TA)

The previous gates are all fairly direct variations on the three basic logic functions: AND, OR, and NOT. The Exclusive-OR gate, however, is something different.

Figure 13, Exclusive OR function from AND, OR NOT gates

There are equivalent circuits for an Exclusive-OR gate made up of AND, OR, and NOT gates, just as there were for NAND, NOR, and the negative-input gates. A rather direct approach to simulating an Exclusive-OR gate is to start with a regular OR gate, then add additional gates (AND gates) to inhibit the output from going “high” (1) when both inputs are “high” (1):

In this circuit, the final AND gate act as a buffer for the output of the OR gate whenever the NAND gate’s output is high, which it is for the first three input state combinations (00, 01, and 10). However, when both inputs are “high” (1), the NAND gate outputs a “low” (0) logic level, which forces the final AND gate to produce a “low” (0) output.

You should recall from the chapter on logic gates that inverting all inputs to a gate reverses that gate’s essential function from AND to OR, or vice versa, and also inverts the output. So, an OR gate with all inputs inverted (a Negative-OR gate) behaves the same as a NAND gate, and an AND gate with all inputs inverted (a Negative-AND gate) behaves the same as a NOR gate. DeMorgan’s theorems state the same equivalence in “backward” form: that inverting the output of any gate results in the same function as the opposite type of gate (AND vs. OR) with inverted inputs: