The objective of this activity is to learn that Lab equipment is not ideal and that “real world” behavior must be taken into account when making measurements. Batteries are not ideal voltage sources and the effective internal resistance will be measured. The actual behavior of two voltage dividers when a DC voltage and an AC voltage are applied will be examined.

Impedance: Every lab instrument has an effect on the circuit it is connected to. Just as it is impossible to design a dynamic mechanical system without friction (that resists motion), it is impossible to design an electrical system without impedance (that resists the flow of electrons). Impedance has two effects on an electrical system. It changes its magnitude (the value of the voltage or current) and its phase (behavior vs time). If the impedance affects only magnitude, then we call it resistance.

All electrical measurement devices have an internal impedance, and this is also true for the M1k. The kinds of impedances that will concern us in this class are listed in table 1: (These values are not precisely correct for a given instrument, but are still of use to make the general point.)

Note that for this first part we are only concerned with the effect of the instrument on the magnitude (resistance component) of the impedance. Also note that the instruments in the lab (M1k) are designed to have as minimal an effect as possible on any circuit they are connected to. In this part of the activity, we examine how much of an effect the instrument has. 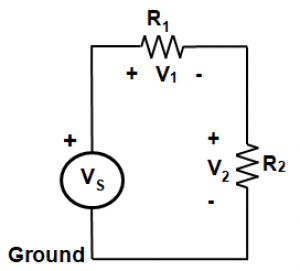 In Figure 1, voltage source VS is divided between R1 and R2. Mathematically, this can be expressed as:

Note that R1+R2 is the total resistance of the circuit. 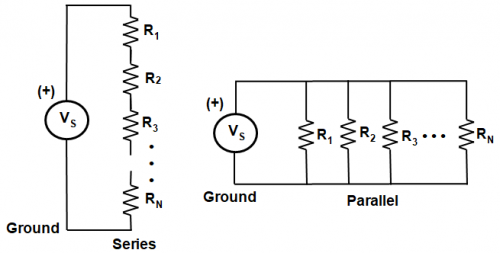 For Resistors in series:

For Resistors in parallel:

For only two resistors in parallel:

Note that the voltage divider equation applies only to series circuits. Any time you use an instrument to measure the voltage across a device, VLoad, as illustrated in figure 3, we are connecting that measurement instrument (RScope) in parallel with the resistance of the circuit being measured. So just connecting the M1k analog input will affect the quantity being measured. In this case the effective load resistance on the battery is RTotal and it is the parallel combination of the M1k input impedance (1 MegΩ) with the resistance of the load resistor (RLoad). This results in a total load resistance, RTotal.

Once the total load resistance, RTotal is known, the voltage divider equation can be used to find the internal resistance of the source. Note that, since the voltage drop across any number of resistors in parallel is the same, VRtotal is equal to VRload.

For capacitors in series:

For capacitors in parallel:

For inductors in series:

For inductors in parallel:

We can use a voltage divider to determine how much effect a device has on a circuit, or in this case, the effect that a circuit has on a device. In the simple electrical model of the battery shown in figure 4, the internal resistance of the battery depends on the battery size and chemistry. This more advanced lab activity uses Electrochemical Impedance Spectroscopy to measure the internal impedance of a battery vs frequency. The simple model in figure 4 ignores much of the internal chemistry including changes as the battery is discharged. The default assumption normally is that the voltage output of a battery doesn’t change with the load. We will investigate how this works in an actual circuit.

The output voltage of the battery will be measured using the M1k with and without load resistor. Remember that Rint represents the internal model of the battery. You do not add this resister to the circuit. RLoad represents the load, or combined resistance of whatever circuit you place on the source. Using the voltage divider formula, we know that the voltage drop across the load is given by:

The experiment above showed that the load can affect the source, in this case a battery. Now we will look at how the instrument can affect the circuit. The M1k analog input (oscilloscope) can load the circuit and affect the circuit being tested. Now you can close the Voltmeter Tool and open the ALICE desktop Scope tool. Use the AWG generator, CHA, of the M1k to put an AC signal across a resistor divider circuit shown in figure 5. Set the CHA frequency to 500 Hz. Set Min to 1 V and Max to 4 V (the goal is 2 Vp-p) . The wave shape can be a Sine wave. Use R1 = 1kΩ and R2 = 1kΩ. Take data and plot the output using Excel.

Make all the connections on the solderless breadboard. In the circuit above, CH A is the signal source output from M1k. GND is Ground. Only one ground connection has to be made from the M1k because the AWG Generator and analog inputs are connected internally to ground. BIN is the channel B analog input (Use Split I/O mode for Channel B).

Calculate the ideal ratio of the voltage that should be measured on BIN to the voltage on CH A when R1 and R2 exactly equal. Now measure the actual voltages and calculate the ratio. R1 and R2 will never be exactly equal in the real world. Measure the voltages again with the resistors swapped, that is the resistor that is where R1 is connected is now where R2 is connected (R2 where R1 was). As shown on the right in figure 5. Compare the two ratios to determine how well matched the two resistors are.

Repeat the above experiment using R1 = R2 = 47 KΩ and 470 KΩ resistors. Again create a table of the measurements and calculate the ratio of the voltages.

At what values of R2 do you think the value of RBIN will start to matter in the accuracy of your measurement?

You can copy an image of the oscilloscope screen to Microsoft Word (or other document editing program) by taking a screen snap shot using the “Snipping Tool”.

You can save the trace data in a csv file, which you can open in Excel, using Save Data as CSV under the File drop down menu.

You can change the thickness of the waveform trace line by: Under the Options drop down menu, Opening the Change Settings controls and entering a new value for the Trace Width in pixels. The Grid width can also be changed.