Activity: AM Modulation and the Envelope Detector

Amplitude modulation (AM) is a modulation technique used in electronic communication, most commonly for transmitting information via a radio frequency carrier wave. In amplitude modulation, the amplitude (signal strength) of the carrier wave is varied in proportion to the waveform being transmitted. That waveform may, for instance, correspond to the sounds to be reproduced by a loudspeaker, or the light intensity of television pixels.

Consider the circuit presented in Figure 1. Two 0.1 uF capacitors are used in parallel to form a 0.2 uF total capacitance which along with the 10 KΩ resistor for a simple low pass filter.

Build the circuit from figure 1 on your solderless breadboard for the envelope detector. Leave the CH A and CH B connections to the ADALM1000 disconnected for now while we generate an amplitude modulated test signal.

We will use the channel A waveform generator as source to provide the AM signal, with the following parameters:

We will use the channel B waveform generator as source to provide the carrier signal, with the following parameters:

With both CH A and CH B set to SVMI mode and Shape Sine you should see waveforms something like those shown in figure 2. Set the Horizontal time scale to 2.0 mSec/Div to display 2 cycles of the 100 Hz waveform. 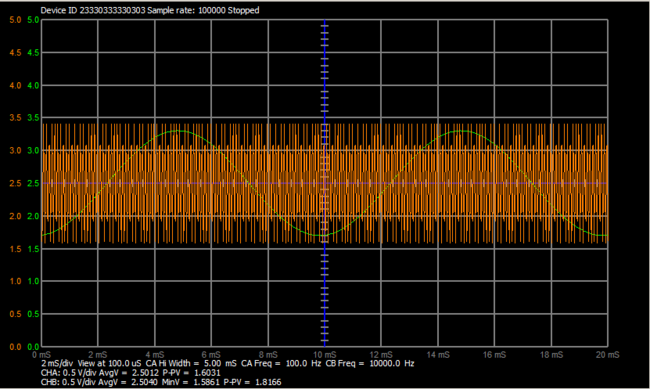 To generate the modulated signal we will use the Math function from the ALICE signal generator CH A. With the program paused, select the Math option under the Shape drop down menu. Enter the following equation which multiplies the captured modulation waveform from channel A with the captured carrier waveform from channel B. Because the signals are centered on 2.5 V that DC portion of the waveforms much be subtracted out. The 2.5 volt offset is then added back to after the multiplication to center the modulated signal in the 0 to 5 V range of the ALM1000.

The generated waveform is presented in Figure 3 as the green trace from CH A. Disconnect the capacitors from the circuit and observe the output signal. With CH B in the Hi Z mode connect it both CH-A and CH-B to your circuit. 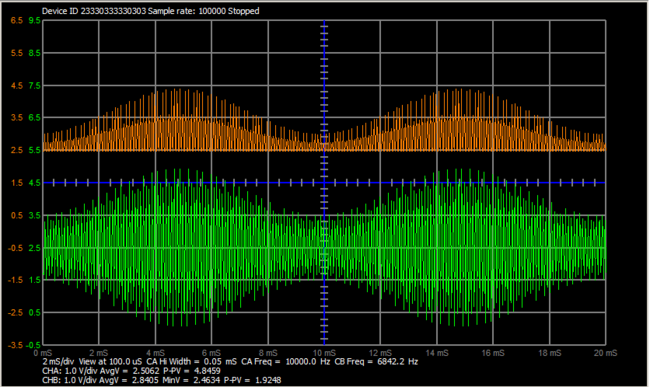 Figure 3, Positive Half of the generated AM signal

Use the vertical range and position controls to shift the traces so that they don not overlap each other. This make it easier to see the two waveforms. Without the capacitor connected, the circuit works like a positive half-wave rectifier that keeps the part of the signal that is above 2.5 V.

Now connect the capacitors back to the circuit. A plot example is presented in Figure 4. 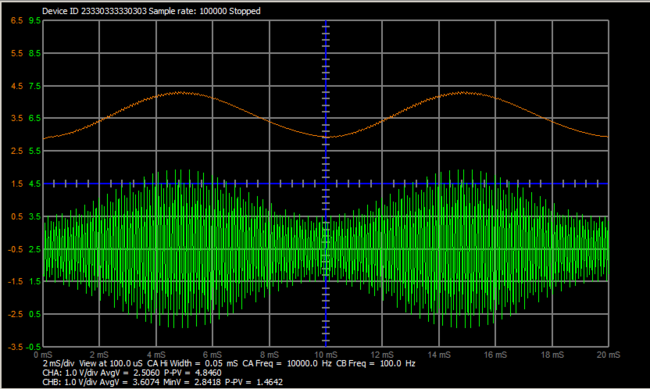 The resulting demodulated signal is the envelope of the positive half wave obtained previously. It is actually the 100 Hz message signal with some 10 KHz ripple on it.

We can also view these signals in the frequency domain using the Spectrum Analyzer tool. First we can look at the 10 KHz carrier and 100 Hz modulating signals separately. Configure the CH A and CH B signal generators as they were back in the first step where they were both set to sine shape and in SVMI mode. Disconnect both channels from your circuit so that they don't interfere with each other.

Open the Spectrum analyzer tool. Set the Cut-DC option to on. Select the CA-dBV and CB-dbV curves for display. Set the Start frequency 100 and the Stop frequency to 50000 with the log frequency scale. Set the number of samples to 16384. With the analyzer running you should see something like the spectrum shown in figure 5. 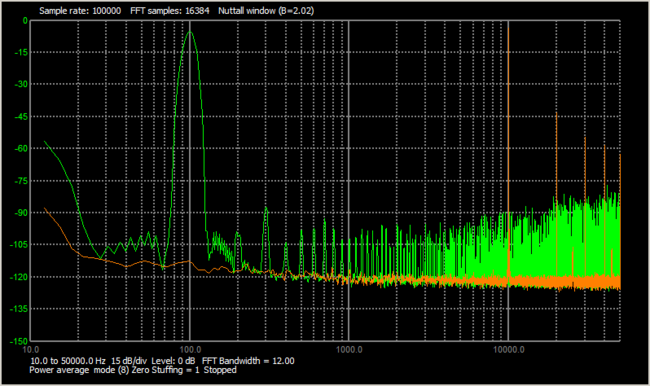 Now regenerate the Math modulated waveform in Channel A. You can reconnect CH-A and CH-B to your circuit and put CH-B back in Hi-Z mode. Now if we zoom into the channel A spectrum by setting the start frequency to 8000 and the stop frequency to 12000 we can see, in figure 6, the main peak is at the 10 KHz carrier frequency and there are the modulation side-bands +/- 100 Hz on either side of the carrier. (i.e. 9900 Hz and 10100 Hz. 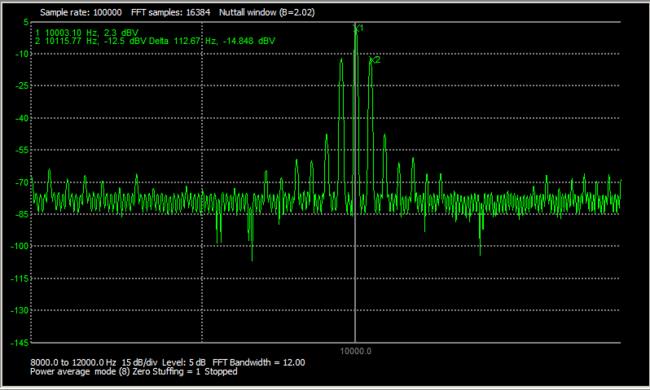 With the filter capacitor, if we look at the spectrum of the demodulated signal after the envelop detector we see the large peak at 100 Hz and a greatly attenuated peak at the 10 KHz carrier frequency as shown in figure 7. 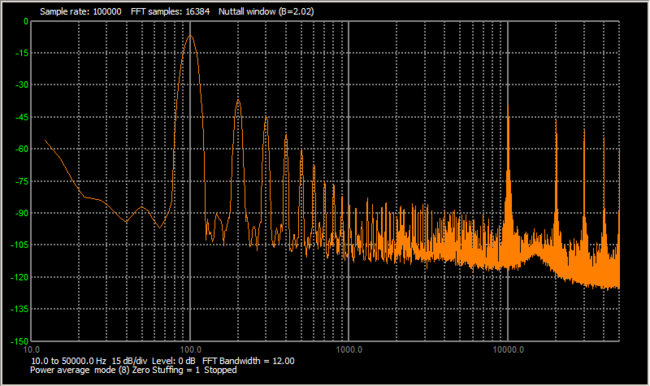 The simple diode based envelope detector of figure 1 does not perform well or at all if the amplitude i.e. Swing is less than the forward turn voltage of the diode. It will suffer significant distortion on the negative half of the modulation signal for high modulation indexes (near 100%) when the diode is not fully turned on. A way around this limitation is to introduce a small DC bias to the diode. This small bias current moves to quiescent operating point of the circuit to right at the turn on point of the diode.

On your solder-less breadboard construct the biased envelope detector circuit as shown in Figure 8. The amplitude modulated signal is AC coupled into the Base of NPN transistor Q1 which is configured as an emitter follower. Voltage divider R1 and R2 along with diode D1 act to set the DC bias point of the AC coupled input (DC restoration). Absent any modulated input the DC quiescent operating point seen at the emitter of Q1 will be the voltage at the junction of R1 and R2 minus the diode drop of D1 and the VBE of Q1. The base current of Q1 flows in diode D1 forward biasing it. During the positive half cycles of the modulated input D1 turns off and the input signal peaks charge filter capacitor C2. During the negative half cycles of the input signal transistor Q1 turns off and D1 turns on harder supplying the input current. 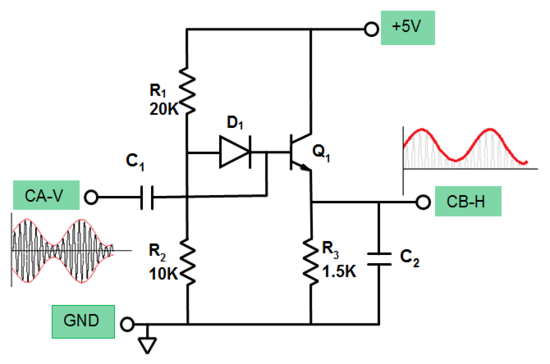