Thévenin's Theorem is a process by which a complex circuit is reduced to an equivalent circuit consisting of a single voltage source (VTH) in series with a single resistance (RTH) and a load resistance (RL). After creating the Thévenin Equivalent Circuit, the load voltage VL or the load current IL may be easily determined.

One of the principal uses of Thévenin's theorem is to replace a large portion of a circuit, often a more complicated and uninteresting part, by a simple equivalent. The new simpler circuit enables rapid calculations of the voltage, current, and power which the more complicated original circuit is able to deliver to a load. It also helps to choose the optimal value of the load (resistance) for maximum power transfer.

In terms of a Thévenin Equivalent Circuit, maximum power is delivered to the load resistance RL when RL is equal to the Thévenin equivalent resistance RTH of the circuit.

1. Verifying the Thévenin's theorem:
a) Construct the circuit of figure 1 using the following component values:

b) Accurately measure the voltage VL across the load resistance using ALM1000 Volt Meter Tool. Use the Volt Meter Tool by connecting channel CA to the + node of VL and connect channel CB to the - node. VL will be the difference between CA volts and CB volts. This value will later be compared to the one you will find using Thevenin Equivalent.

c) Find VTH: Remove the load resistance RL and measure the open circuit voltage VOC across the terminals. Use the Volt Meter Tool by connecting channel CA to the + node of VOC and connect channel CB to the - node. VOC will be the difference between CA volts and CB volts. This is equal to VTH. See figure 4.

d) Find RTH: Remove the source voltage VS and construct the circuit as shown in figure 5. Use the ALM1000 Ohmmeter Tool to measure the resistance looking into the opening where RL was. This gives RTH. Make sure there is no power applied to the circuit before measuring with the Ohmmeter and the ground connection has been moved as shown. 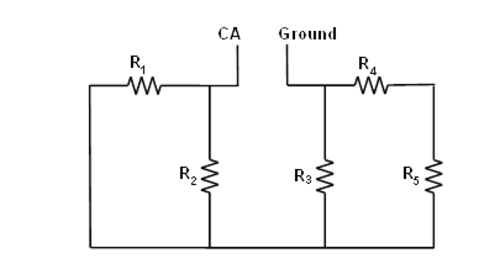 e) Obtaining VTH and RTH, construct the circuit of figure 2. Create the value of RTH using a series and or parallel combination of resistors from your parts kit. Using the Meter - Source Tool connect channel CA for the VTH source and set the value to what you measured for VTH in step c). 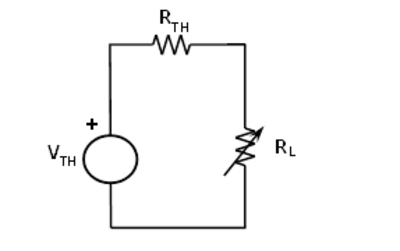 f) With RL set to the 1.5 KΩ used in step b) measure the VL for the equivalent circuit and compare it to the VL obtained in step b). This verifies the Thévenin theorem.

a) Construct the circuit as in figure 7 using the following values:

b) Use the Volt Meter Tool by connecting channel CA to the + node of VL and connect channel CB to the - node across RL. VL will be the difference between CA volts and CB volts.

c) To find the value of RL for which maximum power is transferred, vary the load resistances by constructing series / parallel combinations of 1 KΩ and 100 Ω for RL between 500 Ω to 1400 Ω in 100 Ω steps as shown in figure 8. For each value of RL write down VL. 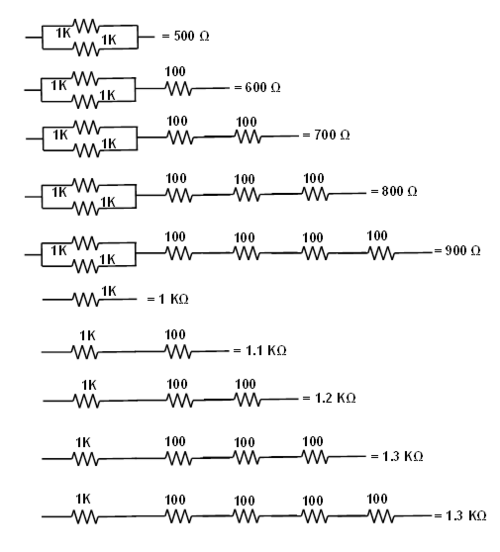 1. Calculate the percentage error difference between the load voltages obtained for circuits of figure 1 and figure 2.

2. Using Voltage Division for circuit of figure 2, calculate VL. Compare it to the measured values. Explain any differences.

3. Calculate the maximum power transmitted to the load RL obtained for the circuit of figure 3.