The object of this activity is to explore an inductor based circuit which can produce an output voltage which is higher than the supplied voltage. This class of circuits are referred to as DC to DC converters or boost regulators. In this activity the voltage from a 1.5 V supply ( battery ) will be boosted to a voltage high enough to drive two LEDs in series.

The circuits used in this Lab activity while generally low current can potentially produce voltages beyond the 0 to 5 V analog input range of the ALM1000. Input voltage divider techniques as discussed in the document on ALM1000 analog inputs would be required. Refer to the document and construct and use input voltage dividers as necessary when preforming these experiments with the ALM1000.

When the current flowing in an inductor is quickly interrupted a large voltage spike is observed across the inductor. This large voltage spike can in fact be useful in some cases. One example is the DC to DC boost converter, which is a circuit that can create a larger DC voltage from a smaller one with very high efficiency. The basic idea is to combine an inductive spike generator with a rectifier circuit, as shown in figure 2. Whenever the transistor is abruptly turned off the voltage at the drain spikes up, the diode D1 is forward biased and current will flow from the inductor to charge up the storage capacitors C3 and C4. When the drain voltage subsequently drops below the voltage on the capacitor, the diode is reverse biased and the output voltage remains constant. Just as in the chapter on AC power supplies, the output capacitor must be sized appropriately to minimize the ripple relating to the current flowing in the load. We will just use a small capacitor here and hence the circuit will not be able to source a large output current.

For additional background and simulation material on DC-DC converters go to this more in depth explanation.

First step is to build a 1.5V power supply ( to simulate a single cell battery ) as shown in figure 1. Build the circuit on one end of your solder-less breadboard being sure to leave space for the rest of this lab’s circuits. Note, if you have a 1.5 Volt battery (AA) and a battery holder with wires attached, you could substitute that as the 1.5 V supply. 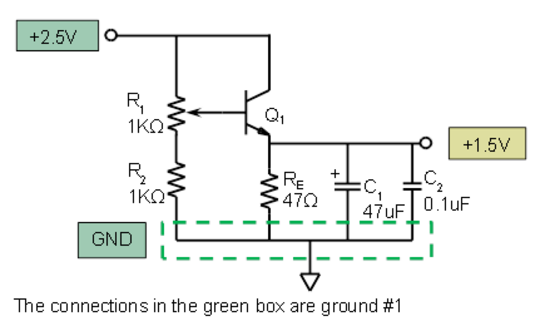 Once you have the 1.5 V supply constructed, you will need to adjust the potentiometer, R1, such that the output is set to 1.5 V. Use one or the other of the ALM1000 inputs in Hi-Z mode to measure the voltage. ( display the AVG voltage for the channel you choose ). An optional DMM could also be used to measure the DC voltage. Note the dashed green box in figure 1 surrounding the ground connections. Later you will be measuring the current in ground for different sections of the circuit. The ground connections in figure 1 will always be connected directly to the ground of the ALM1000. The other sections of ground will, at various times, be either connected to the main ground or the CH-B connector pin on the ALM1000. So as you construct the circuit keep these “ground” connections separate, i.e. don’t use one of the common power bus strips for all the “grounds”.

Temporarily connect one of your LEDs from the 1.5 V output to ground. Be careful to note the polarity of the diode so it will be forward biased. Does it light up? Probably not since 1.5 V is generally not enough to turn on an LED. We need a way to boost the 1.5 V to a higher voltage to light a single LED let alone two LEDs connected in series. Disconnect the 2.5 V supply and remove the LED before moving to the next construction step.

Next, on your solderless breadboard construct the DC-DC boost circuit section as shown in figure 2.

Start with the three sections of ground ( #1 and #2 and #3 ) all connected to the main ALM1000 ground. With CH-B in Hi-Z mode you will be using it to observe various voltage waveforms around the circuit.

Start with a switching frequency of 2 kHz which is supplied by AWG A, CA-V. Set the Min value to 0 and the Max value to 3.5 ( enough to turn on M1 ). Set the mode to SVMI and the shape to square.

Using CH-B in Hi-Z mode observe and save the voltage waveforms seen at the following circuit nodes. First, the 1.5 V input source. Second, the drain of M1. Third the “boosted” output, VOUTat the top of LED1. You should also measure the current in the LEDs by taking the voltage at the junction of R3 and LED2 divided by the value of R3, 100 Ω.

You may want to save snap-shots of the voltage traces or save the VBuffB array to another temporary data array to be plotted later when you are making the current measurements.

Now that we have measured all the interesting voltage waveforms associated with the circuit we need to measure the relevant current waveforms as well.

If we set the channel B voltage to a DC value we can think of it as an AC ( and DC ) ammeter with one end connected to the set DC voltage. The DC voltage we set could be a supply voltage or it could be 0V and we would then be measuring the current flowing into or out of ground.

The first current we will measure is the current in the inductor L1. Be sure the frequency of the clock CH-A is still set to 2 KHz. Set AWG CH-B to SVMI mode and Shape to DC with a Max value of 1.5 V, to match the 1.5 V from the 1.5 V supply from figure 1 ( or AA battery if you are using that ). Because the shape is set to DC the Min and frequency values are ignored. Disconnect the left end of L1 from the 1.5V supply and connect L1 to CH-B. Under the curves menu be sure to select the CB-I trace to be displayed.

Hit the run button and you should see the square wave ( switch drive ) on the CA-V trace, the constant 1.5V DC voltage on the CB-V trace and the inductor current on the CB-I trace. Adjust the CB-I vertical scale as needed to fit the peak amplitude of the current on the screen.

Note the time when switch M1 is on and when M1 is off and the current in L1. Take a snap-shot of the CB-I current trace for future reference ( or save the IBuffB array into another array so it can be plotted later).

Disconnect L1 from CH-B and reconnect it to the 1.5V supply.

Now we want to measure the currents in the two sections of “ground” you separated out when you built the breadboard. First, disconnect the ground #2 section from the main ground bus and connect it to CH-B. Set CH-B Max value to 0 ( the same voltage as ground ). The current in ground #2 is just the current in M1, the switch.

Hit the run button and you should see the square wave ( switch drive ) on the CA-V trace, the constant 0V DC voltage on the CB-V trace and the M1 source current on the CB-I trace. Adjust the CB-I vertical scale as needed to fit the peak amplitude of the current on the screen. Note the polarity ( direction ) of the current. Display the saved L1 current trace and compare the two. What part of the L1 current flows in M1 and where in time does it flow? Save the CB-I trace of ground section #2. (save the IBuffB array into another array ).

Hit the run button and you should see the square wave ( switch drive ) on the CA-V trace, the constant 0V DC voltage on the CB-V trace and the LED load current on the CB-I trace. Adjust the CB-I vertical scale as needed to fit the peak amplitude of the current on the screen. Note the polarity ( direction ) of the current. Display the saved L1 current trace and compare the two. What part of the L1 current flows in load and where in time does it flow? Save the CB-I trace of ground section #3. (save the IBuffB array into another array ).

Now increase the frequency to 4, 6 and 8 KHz. Measure and record the boosted output voltage waveform and the current waveforms. Explain what has changed and why?

With a 2 KHz clock frequency, reduce the duty-cycle of the CH-A square wave switch drive waveform from 50% to 45%, 35% and 25%. How does the duty cycle change the voltage and current waveforms?

The output impedance ( load regulation ) of the simple emitter follower in figure 1 can be improved through the addition of feedback. Shown in figure A1 is a follower circuit where the single NPN ( Q1 is a 2N3904) transistor is replaced with a NPN/PNP compound transistor ( Q2 is a 2N3906 ). The load regulation of a single transistor follower is a function of how much the VBE changes as the emitter current changes. In the case of the compound transistor configuration a small increase in the current of Q1 is amplified and causes a much larger current to flow in PNP transistor Q2.

There is also the added benefit that the base current of Q1 is now much smaller and its effect on the voltage divider of R1 and R2 is much smaller. 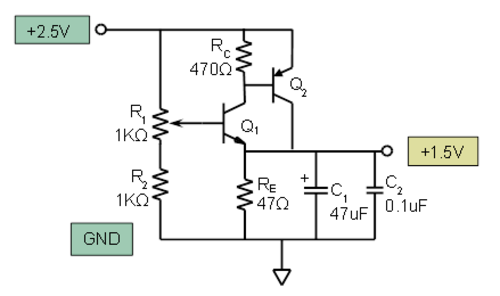 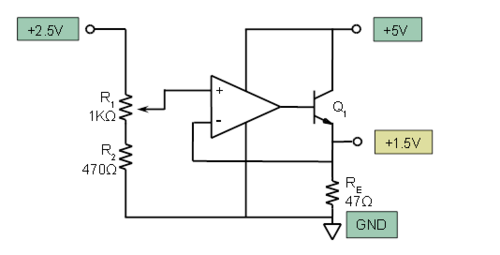