As in all the ALM labs we use the following terminology when referring to the connections to the M1000 connector and configuring the hardware. The green shaded rectangles indicate connections to the M1000 analog I/O connector. The analog I/O channel pins are referred to as CA and CB. When configured to force voltage / measure current –V is added as in CA-V or when configured to force current /measure voltage –I is added as in CA-I. When a channel is configured in the high impedance mode to only measure voltage –H is added as CA-H.

The most common type of loudspeaker is an electro-mechanical transducer using a voice coil connected to a diaphragm or cone. The voice coil in moving coil loudspeakers is suspended in a magnetic field provided by a permanent magnet. As electric current flows through the voice coil, from an audio amplifier, the electro-magnetic field created by the current in the coil reacts against the permanent magnet's fixed field and moves the voice coil (also the cone). Alternating current will move the cone back and forth. The movement of the cone vibrates the air producing the sound.

To help understand the measurements you are about to make, a simplified electrical model of a loudspeaker is shown in figure 1.

• L is the voice coil inductance usually measured in milliHenries (mH). Typically, the industry standard is to measure the voice coil inductance at 1000 Hz. As frequencies increase above 0 Hz, there is a rise in impedance above the Rdc value. This is because the voice coil acts as an inductor. Consequently, the overall impedance of a loudspeaker is not a constant impedance, but can be represented as a dynamic profile that changes with input frequency as we will see when we make measurements. Maximum impedance, ZMAX, of the loudspeaker occurs at the resonant frequency, FS, of the loudspeaker. 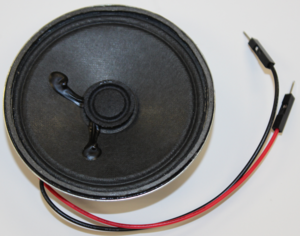 First build the circuit shown in the figure 3, preferably using your solder-less breadboard. The loudspeaker can be in an enclosure or not. This configuration allows us to measure the voltage across the speaker VL using channel B voltage trace and the load current IL as the channel A current trace.

Try setting channel A to a few different frequencies and see how the voltage across the speaker and the calculated Z changes. 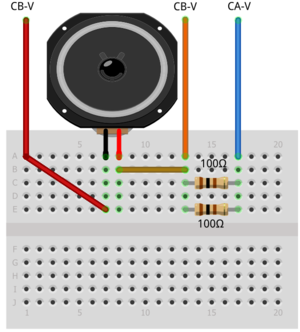 Procedure to use the ALICE Bode Plotter:

Under the Options drop down menu click on Cut-DC to select it if it not already. Change the FFT Zero stuffing factor to 3.

Set Channel A Min value to 1.0 Volts and the Max to 4.0 V. Set AWG A Mode to SVMI and Shape to Sine. Set AWG channel B Mode to Hi-Z. Be sure the Sync AWG check box is selected.

Now Export the data, as magnitude not in dB to make the math easier, to a comma separated values file ( File menu – Save Data ) and load it into a spreadsheet program such as Excel. You will use the 50 Hz to 1000 Hz Channel B data from this file as the VL values.

Note the frequency points where the phase is at its positive maximum, zero and negative minimum. The data on the screen is plotted in dB so the vertical scale is not in volts. Your speaker will probably look different than this example. 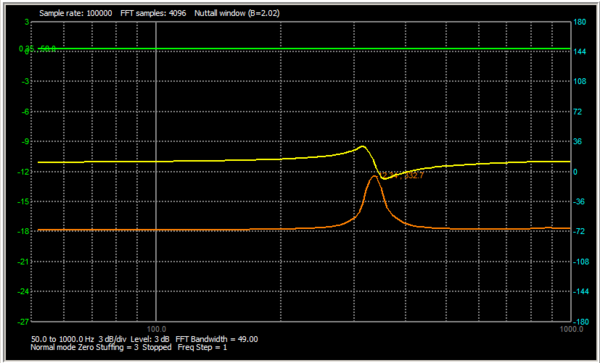 You can now plot the calculated impedance Z vs Frequency. An example plot is shown in figure 6. Your speaker will probably look different than this. 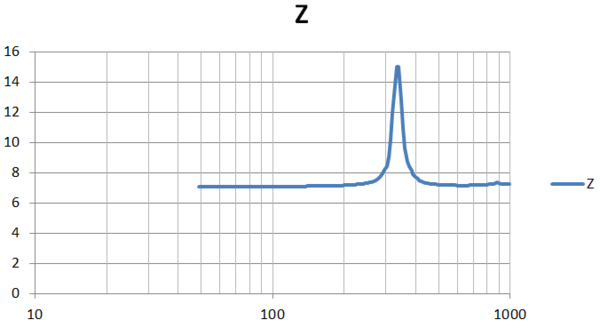 The speaker impedance is small, approximately equal to the DC resistance in the linear region but is much higher at the resonance frequency FS.

Based on your measured data extract the L C and R for the speaker electrical model shown in figure 1 for the speaker you used. You can measure Rdc with the DC ohmmeter tool. Ignore LINPUT as it will be small compared to L. Enter these values into a circuit simulation schematic of the model and generate a frequency response sweep from 50 Hz to 1000 Hz and compare your model to the data you measured in the lab.

Procedure to use the ALICE Impedance Analyzer to measure speaker impedance:

Set Ext Res = 50, set the channel A Freq to a value well below the resonate frequency of your speaker. In this first example measurement 100 Hz was used. Set the Ohms/div to 10. As can be seen from the data, the phase angle should be positive. The series resistance of the speaker is around 7 Ω and the reactance is inductive. 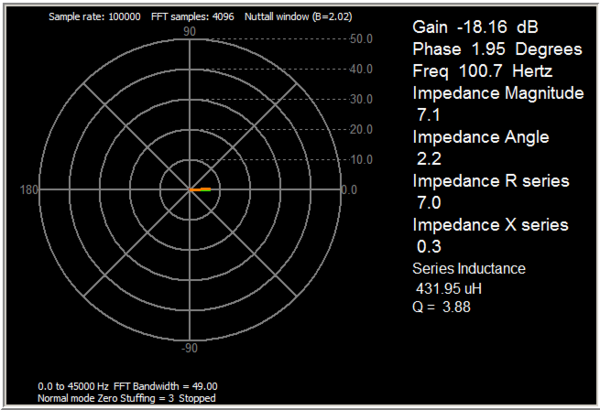 Now set the frequency to the resonate value you obtained from the frequency sweep. You may want to fine adjust the value to find the exact point where the reactance is zero as shown in figure 9. 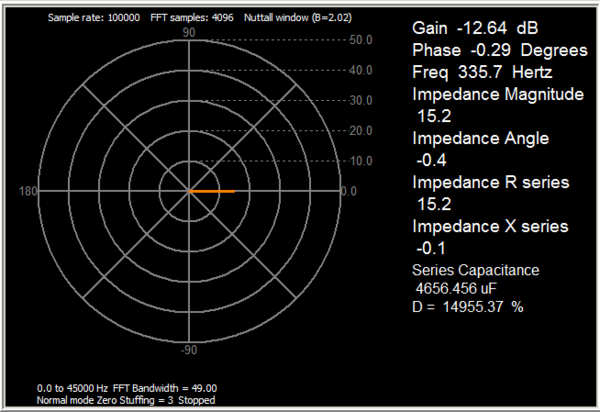 This result should agree with the results from the frequency sweeps. The phase angle should be small and the series resistance is now larger at about 15 Ω.

Now set the frequency to a point above the resonate frequency where the phase is near its negative peak as shown in figure 10, 500 Hz was used here. 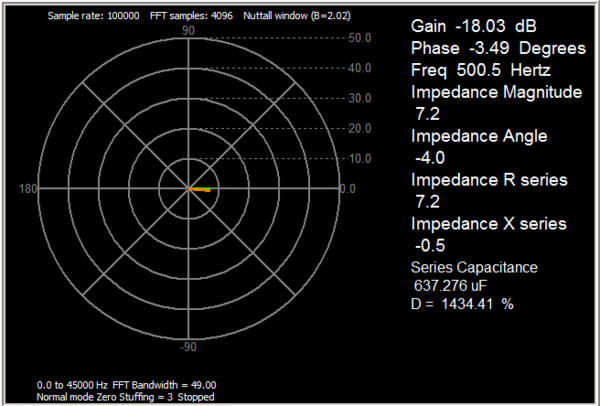 As can be now seen from the data, the phase angle should be negative. The series resistance of the speaker is still around 7 Ω but the reactance is capacitive.

Explain your results based on the parallel LC loudspeaker impedance model in figure 1.