The objective of this Lab activity is to gain insight into the push pull output stage (Class B), understand crossover distortion and the use of negative feedback to reduce errors. The amplifier combines an emitter degenerated NPN common emitter amplifier first stage in cascade with a PNP common emitter second stage and an NPN/PNP push-pull output stage. Negative feedback from the output to the emitter of the first NPN stage determines the overall amplifier gain.

As in all the ALM labs we use the following terminology when referring to the connections to the ALM1000 connector and configuring the hardware. The green shaded rectangles indicate connections to the ALM1000 analog I/O connector. The analog I/O channel pins are referred to as CA and CB. When configured to force voltage/measure current, –V is added as in CA-V or when configured to force current /measure voltage, –I is added as in CA-I. When a channel is configured in the high impedance mode to only measure voltage –H is added as CA-H.

Scope traces are similarly referred to by channel and voltage / current. Such as CA-V, CB-V for the voltage waveforms and CA-I, CB-I for the current waveforms. 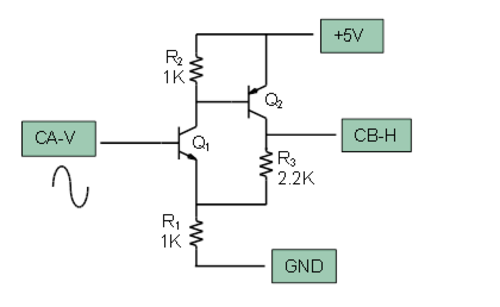 Figure 1, Follower with gain greater than one

Build the amplifier as shown in figure 2 on your solder-less breadboard. 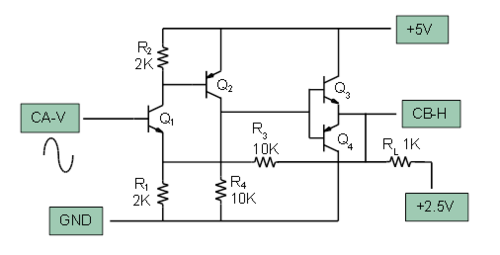 The amplifier consists of three stages, a low gain degenerated common emitter Q1, a high gain stage, Q2 and the push-pull output stage, Q3 and Q4. Q3 and Q4 are commonly referred to as a push pull configuration. NPN Q3 sources (push) current to the output load on the positive half cycle while PNP Q4 sinks current from the load on the negative half cycle (pull). The amplifier is class B since only one output transistor drives the load (RL) at any given time.

The two transistors are emitter followers so the gain from their bases to the output is one, but with a region where both are off, the crossover region. This crossover distortion is caused by the base-emitter diode drop. Note that the PNP transistor configuration is drawn with the emitter pointing up toward the positive supply which is the reverse of the NPN configuration where the emitter points toward ground (the most negative voltage).

PNP Q2 is configured as a common emitter amplifier stage with R4 as the collector load. It's similar to the NPN configuration with the appropriate change in signs for the voltages. Since the emitter is tied to +5 volts, any change at the collector of Q1 changes the VBE of Q2 which in turn results in an exponential change in the emitter current Ie for Q2. Assuming sufficiently large β, Ic is approximately equal to Ie.

The gain is given by:

Note that with feedback, variations in the gain of the second stage, Q2 (570) will have negligible effect on the overall gain.

Because of the use of 5% resistors and variations in transistors, the quiescent output voltage Vout is mostly likely not centered exactly on 2.5 V (one half of the 5 V power supply ).

The crossover distortion is really apparent with a very low input signal. Attach a speaker to your amplifier. Feed the output from the function generator or your mp3 player/smartphone and see if you can hear the distortion. The cross distortion is more apparent a low volume. The distortion can be eliminated with a pair of diodes, a VBE multiplier or the addition of NPN and PNP emitter followers as we will investigate in the next section.

(1) With no input, show that the quiescent operating point for Vout is 2.5V.
(2) Demonstrate operation of your amplifier showing cross over distortion.

Reducing the cross over distortion: 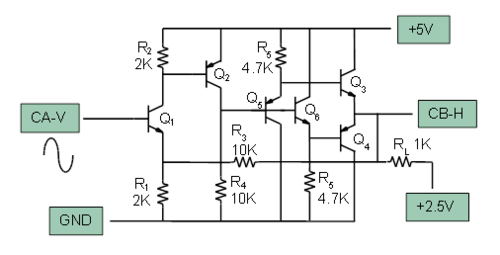