In addition to emitting light, an LED can be used as a photodiode light sensor / detector. This capability may be used in a variety of applications including ambient light level sensor and bidirectional communications. As a photodiode, an LED is sensitive to wavelengths equal to or shorter than the predominant wavelength it emits. A green LED would be sensitive to blue light and to some green light, but not to yellow or red light. For example, a red LED will detect light emitted by a yellow LED and a yellow LED will detect light emitted by a green LED but a green LED will not detect light emitted by a red or yellow LED. All three LEDs will detect “white” light or light from a blue LED. White light contains a blue light component which can be detected by the green LED. Recall that visible light wavelengths can be listed from longest wavelength to shortest wavelength as Red, Orange, Yellow, Green, Blue, Indigo, Violet (remember the mnemonic “Roy G. Biv”). Violet is the shortest wavelength light with the most energetic photons and red has the longest wavelength light with the least energetic photons of all of the visible colors of light. LED's with clear plastic encapsulation will be more sensitive to broad-spectrum illumination (like general room lighting) than LED's with colored encapsulation (such as those included in the Analog Parts Kit). 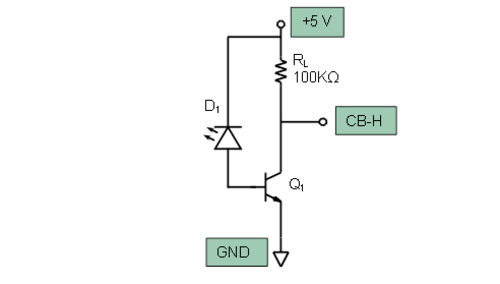 Use the fixed +5 V power supply from the ALM1000 module to power your circuit. You can use either scope channel A or B to monitor the voltage at the collector node of Q1.

Insert a red, yellow or green LED into the circuit as shown one at a time. Try exposing the three different color LEDs from your Analog Parts Kit to different light sources such as standard incandescent, florescent and LED lights held at differing distances from the sensor LED. Observe the voltage waveform seen at the collector of Q1. Try inserting the infrared LED from your kit and observing how it responds to the light from the different sources. Try increasing the sensitivity or gain by increasing the value of RL to 200KΩ or 470KΩ. 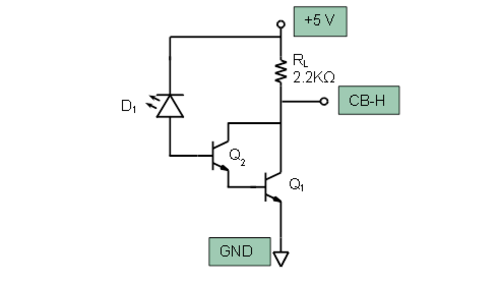 How well does the red LED respond to the various light sources?
Does it respond to another red or yellow or green LED used as a light emitter?
How about the yellow and green LEDs?
Is the infrared LED sensitive to the same or different wavelengths of light compared to the visible light LEDs?
Which is the most sensitive to standard household lights such as incandescent and compact florescent bulbs?

How does the sensitivity of the Darlington connected configuration compare to the single common emitter configuration?
Are the minimum and maximum voltages the same for both configurations? If not why?