The goal of this activity is to explore the use of the high gain inverting CMOS amplifier along with a light dependent resistor to construct an RC oscillator who's frequency is controlled by the amount of light falling on the photo resistor.

The simple two transistor CMOS inverter can also be viewed as a high gain amplifier. It consists of one PMOS device, M1 and one NMOS device M2. Generally the CMOS fabrication process is designed such that the magnitude of the threshold voltage, VTH, of the NMOS and PMOS devices are roughly equal i.e. complementary. The designer of the inverter then adjusts the width to length ratio, W/L, of the NMOS and PMOS devices such that their respective transconductance is also equal.

Below in figure 2 is the schematic and pinout for the CD4007: 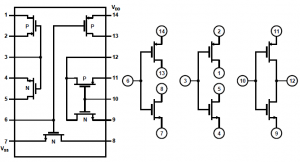 First build the simple example shown figure 4 to test the input to output transfer function of the simple CMOS amplifier. The green boxes indicate connections to the connector on ALM1000. Connect +5V power supply to VCC (pin 14) and ground to GND (pin 7). Connect the output of the channel A voltage generator to one of the inverter inputs (pin 6) and connect the inverter output (pin 8,13) to channel B scope input CB-H in Hi-Z mode.

Configure the channel A voltage generator CA-V for a 200 Hz triangle wave with 0 V Min value and 5V Max value. Both scope channels should be set to 0.5V/Div.

There are basically two requirements to make an oscillator. The first is some sort of gain stage such as the CMOS inverter we just looked at and the second is some sort of frequency dependent or phase delay block like a RC time constant. Positive feedback around a cascade of two of these inverter stages such as was looked at in the MOS Multivibrator Activity completes the oscillator.

First, be sure the power supplies are switched off before modifying your circuit. Working from the single inverter you constructed in figure 4 add a second inverter stage along with capacitor C1 and the photo resistor to build the oscillator as shown in figure 5. The waveform generator is no longer needed but keep scope channels 1 and 2 connected to the output of both inverter stages.

Scope channels A and B should be set to Hi-Z mode. Set the Triggering to the rising edge of CA-V. Set the trigger level to 2.5 V. The horizontal time base will need to be adjusted so that a few cycles of the oscillator output frequency are displayed. This will change based on the amount of light falling on the photocell.

What is the lowest ( full darkness ) and highest ( bright light ) frequency that the circuit will oscillate at? Try substituting other higher and lower value capacitors for C1 and again determine the range of frequencies from full darkness to bright light.

Could you modify this circuit to make the frequency of the oscillator temperature dependent by substituting the photo resistor with the thermistor from the Analog Parts Kit?