The objective of this Lab activity is to learn how to implement a series of amplifiers for signal amplifiaction and filtering, in a practical example, that aims to monitor heartbeat information. The result of the system provides a relevant output that is displayed using the ALM1000 tool.

Going through this lab activity, the students will learn how to drive a IR LED and a Phototransistor, will be able to design and understand the behavior of low-pass and high-pass filters and explore functionalities provided by the operational amplifiers in different configurations.

Combining the previously mentioned electronic devices, the result of the activity will demonstrate how a real world application can be implemented with minimum software and hardware equipment.

A type of Heart Rate Monitor consists of an electronic circuit that monitors heartbeat by clipping onto a finger tip. It does this by shining light into or through your finger and measuring how much light is reflected or absorbed. This goes up and down as blood is pumped through your finger. For the operation as a optical heartbeat detector, a combination of an Infrared LED and Photo transistor is used. The LED emits light into or through the finger and the reflected or transmitted light is detected by the photo transistor, which acts like a variable current source conducting different amounts of current depending on the light received.

The voltage variations change with the heartbeat and are acquired from the collector of the photo transistor. The small signal obtained is used as input for the following circuit, providing an output signal as a heartbeat detector or monitor.

In order to have a relevant output, the input signal is passed through multiple circuits:

Select the following components from the ADALP2000 Analog Parts Kit. Note, the parts kit contains both OP-482 and OP-484 quad op-amps. They look very similar and are both in 14 pin DIP packages. The laser branding on the packages can be hard to read. Fortunately they share a common pinout so you will not damage them if you use the wrong one in this experiment by accident. The circuit will just not operate properly. 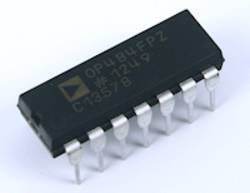 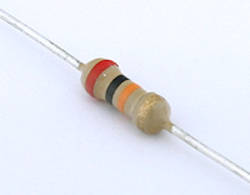 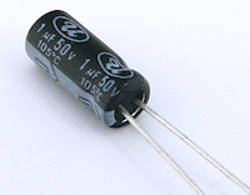 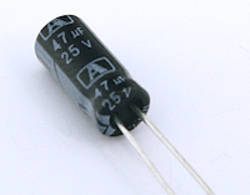 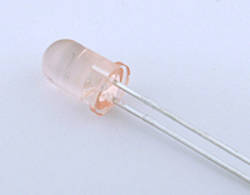 1 - Infrared Transistor (QSD-123) the longer of the two leads is the collector and the shorter lead is the emitter. 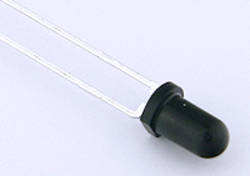 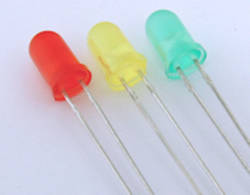 On your solder-less breadboard construct the heartbeat monitor circuit as shown in figure 1. The values shown for the gain setting resistors R5 and R6 are approximate and may need to be adjusted based on the response of the person who's heart rate is being monitored. Increasing or decreasing the ratio may be needed to obtain an optimal output signal amplitude that fits within the available 0 to 5V range.

The collector load resistor R2 of the photo transistor can also be adjusted to optimally center the signal.

The circuit uses the OP484FPZ quad opamp from the ADALP2000 Analog Parts Kit, the schematic design was implemented with three of the Precision Rail-to-Rail Operational Amplifiers. They operate from a single supply (+5V) from the ADALM1000 module.

In order to supply a proper current that will not damage the IR LED, a resistor is added in series to limit the current. Varying the value in the operating range will change the intensity of the emmited light of the IR LED. The following formula expresses the value of the forward current (IF) through the LED, based on the positive voltage supply +5V (VP), series resistance (R1) and forward voltage drop on the LED (VF):

To generate a voltage signal from the phototransistor (Q1) when ilumonated with the IR light from the LED, a common-emmiter amplifier circuit is used. This circuit generates an output which transitions from a high state to a low state when light in the infrared range is detected by the phototransistor. The output is created by connecting a resistor (R2), whose value is determined experimentally, between the voltage supply and the collector pin of the component.

The input signal from the heartbeat monitor sensor is fed into a Differentiator Amplifier or high pass filter Circuit1) (C1, A1, R3). The capacitor blocks any DC content, C1 and R3 behaving as a high pass filter with the cut-off frequency Fc1 being determined by the following formula:

In addition to filtering, this stage serves also as an amplifier taking at the input the current (IA1), and generating at the output an inverted voltage (VA1) based on the negative feedback resistance (R3):

Active Filters contain active components such as operational amplifiers, within their circuit design. They draw their power from an external power source and use it to boost or amplify the output signal. Active Low-Pass Filter2) principle of operation and frequency response is the same as of a simple RC Low-Pass Filter, the only difference being that that it uses an op-amp for amplification and gain control.

This first-order low pass active filter (A2, R4, C2), consists simply of a passive RC filter stage providing a low frequency path to the input of a non-inverting operational amplifier.

The filter has the aim to cut the high frequencies that correspond to the noise signal. Taking into account that the heart rate does not exceed a value of 180 beats per minute (bpm) and the dependency between the bpm and the frequency is:

will result that frequencies that are higher than 3Hz should be filtered out. The RC Low-Pass Filter is designed for this frequency value using the formula:

The amplifier is configured as a voltage-follower (Buffer) giving it a DC gain of one, AV = +1.

While this configuration provides good stability to the filter, its main disadvantage is that it has no voltage gain above one. However, although the voltage gain is unity the power gain is very high as its output impedance is much lower than its input impedance.

The configuration of the final stage represents a AC Op-amp Integrator with DC Gain Control 3). In simpler words, the circuit has the aim to low-pass filter (R4, C2) the signal from the remaining unnecessary frequencies that are higher than the maximum frequency of the heartbeat and amplify through the inverting amplifier the useful signal with a gain (AV)determined by ratio between R6 and R5:

Considering the circuit designed in LTSpice or ADIsimPE, two types of simulation are performed:

Use the fixed positive power supply from the ADALM1000 module for the 5 V to power your circuit. Use scope channel A to monitor the voltage at the collector node of Vout.

The Heart Rate monitor can operate in either of two modes. In the first mode, as shown on the left of figure 4, the light from the LED is reflected as it passes into the tip of the finger and bounces back into the photo transistor. Arrange the LED and photo transistor right next to each other both facing up. It might be useful to shorten the leads so that they sit against the breadboard surface. In the second mode, as shown on the right of figure 4, the light from the LED passes through the tip of the finger and into the photo transistor on the other side. Put the tip of your finger between the IR LED (D1) and the Photo transistor (Q1). The emitter and the receiver should be aligned and pointing one to another. 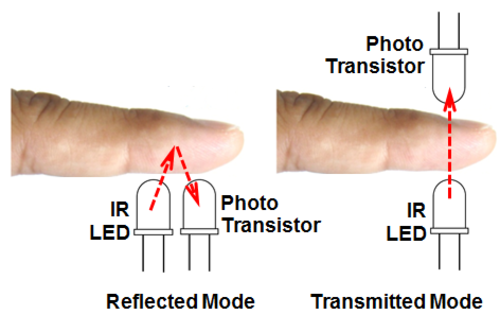 The red LED should blink on and off once per heart beat, about once per second.

Observe the voltage waveform seen at the the output of the 3rd stage op amp (A3). The signal is very slow, low frequency, and is best viewed using the Alice M1K Strip Chart tool. Start the Strip Chart and select CH-A on 1 grid, then hit Run. An example of the output waveform is shown in Figure 5.

1. Using the values and formulas provided in the laboratory directions compute the following parameters:

2. Using the oscilloscope, capture the voltage signal at the output of the first stage and try to compute the amplitude of the input current.

3. What role has the buffer in the second stage?

4. What parameters change if R5 is modified? How will the signal look on the Oscilloscope?

5. What parameters change if R6 is modified? How will the signal look on the Oscilloscope?

6. On the Heartbeat Output Waveform the signal is not centered on 0V, even though the DC component should have been removed. Why is this happening? What should be added at the output of the circuit to reduce the offset?