The purpose of this activity is to investigate the common emitter configuration using the BJT device.

The configuration, shown in figure 1, demonstrates the NPN transistor used as a common emitter amplifier. Output load resistor RL is chosen such that for the desired nominal collector current IC, approximately one half of the +5 V voltage (2.5 V) appears at VCE. Adjustable resistor Rpot along with Rb sets the nominal bias operating point for the transistor (IB) to set the required IC. Voltage divider R1/R2 is chosen to provide a sufficiently large attenuation of the input stimulus from waveform generator channel A. This is done to more easily view the channel A generator signal, given the rather small signal that will appear at the base of the transistor, VBE. The attenuated CA-V generator signal is AC coupled into the base of the transistor by the 4.7 uF capacitor so as not to disturb the DC bias condition. 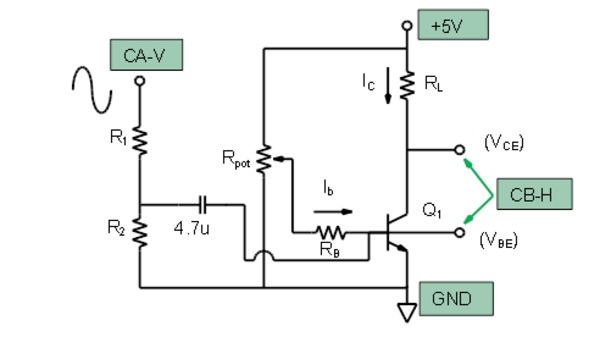 The channel A waveform generator output CA-V should be configured for a 1 KHz sine wave with 3 volt Max and 0 volt Min (3 V p-p). Scope channel CB-H is used to measure alternately the waveform at the base and collector of Q1.

The voltage gain, A, of the common emitter amplifier can be expressed as the ratio of load resistor RL to the small signal emitter resistance re. The transconductance, gm, of the transistor is a function of the collector current IC and the so called thermal voltage, kT/q which can be approximated by around 25 mV or 26 mV at room temperature.

The small signal emitter resistance is 1/gm and can be viewed as being in series with the emitter. Now with a signal applied to the base the same current (neglecting base current) flows in re and the collector load RL. Thus the gain A is given by the ratio of RL to re.

The purpose of this section is to investigate effect of adding negative feedback to stabilize the DC operating point. 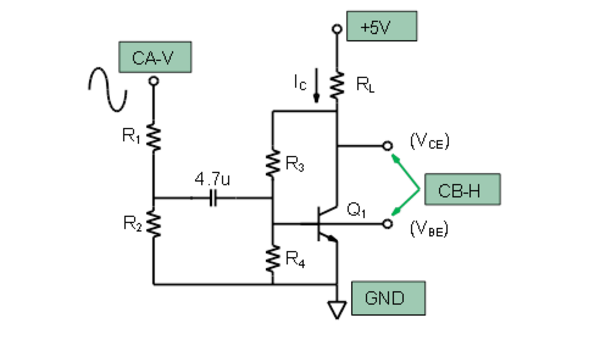 The purpose of this section is to investigate effect of the addition of emitter degeneration.

1 - 5KΩ Variable resistor, potentiometer (500Ω if one is available)

Disconnect the emitter of Q1 from ground and insert RE, a 5KΩ potentiometer, as shown in the following diagram. Adjust RE while noting the output signal seen at the collector of the transistor. 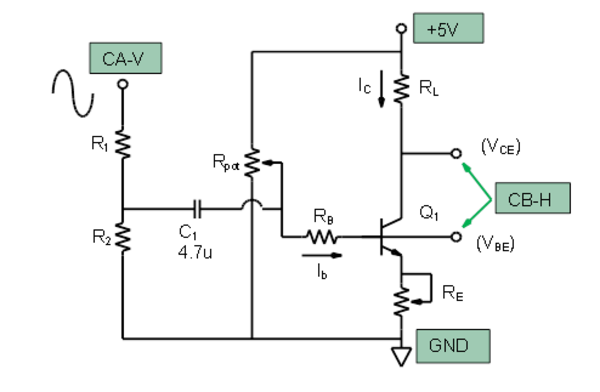 What effect does adding RE have to the DC operating point of the circuit and how much would you need to adjust Rpot to return the circuit to the same DC bias (IC) you had in figure 1?

What is the effect on the voltage gain, A, by increasing RE? 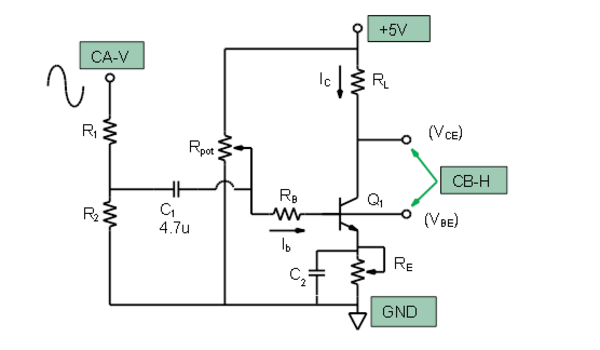