The input stage transistor Q1 performs a current steering function. It can be thought of as a back-to-back diode arrangement. The transistor is operated in either forward or reverse mode to steer current to or from the second stage transistor's base, Q2. The forward current gain or ßF, is much larger than the reverse ßR. it provides a higher discharge current to discharge the base when turning it off.

Second stage transistor, Q2 in figure 1, is a phase splitter to drive both halves of the pull up and pull down output stage. It allows the input condition to be produced in opposite phases so that the output transistors can be driven in anti-phase. This allows Q3 to be on when Q4 is off and vice versa as shown in figure 3.

Build the circuit shown in figure 5 on your solder-less bread board. The NPN transistors supplied with your ADALP2000 Parts Kit are limited to 5 2N3904 and 1 TIP31 power transistor. Use the 5 2N3904 transistors and a 1N914 diode. 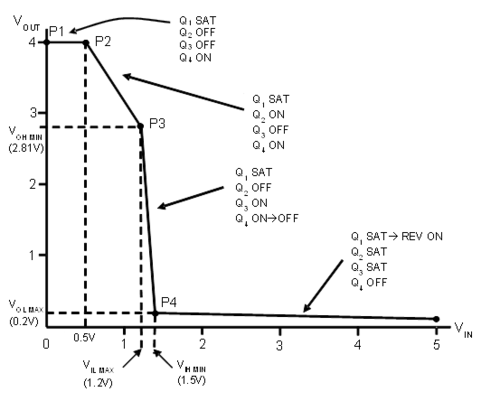